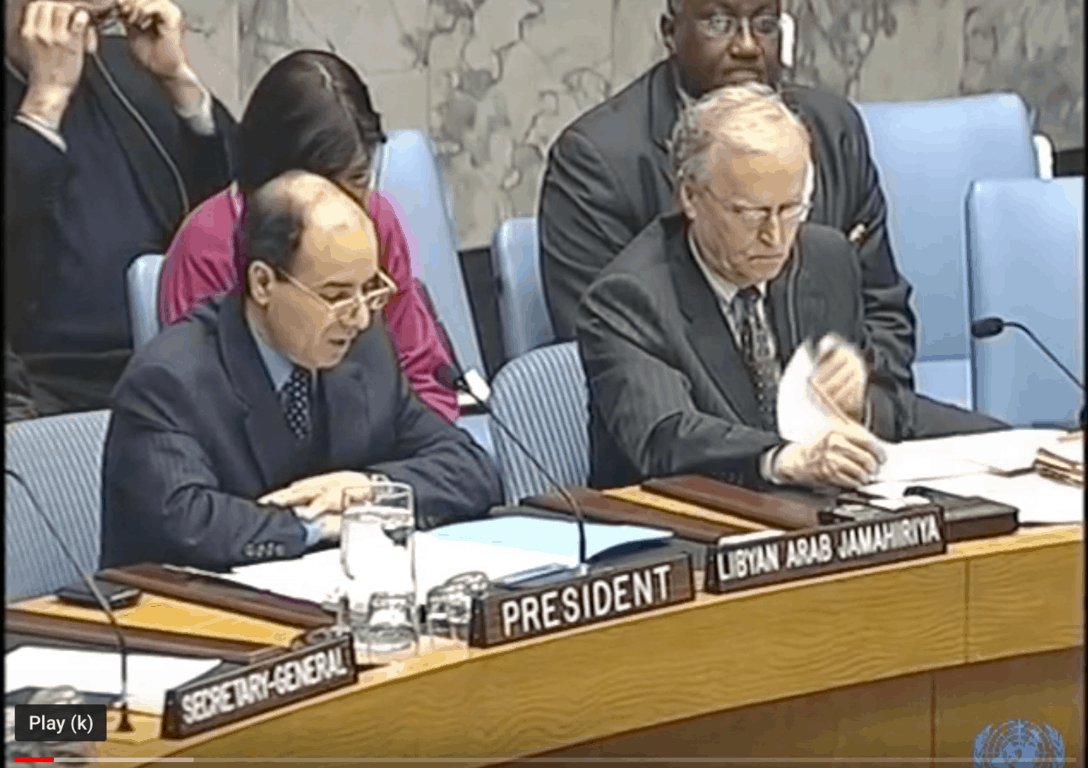 Libya presided over the Security Council in March 2009.

This pro-Palestine bias becomes clear when one contrasts the often minor incidents that result in Security Council censure of Israel with the many acts of violence against Israel that pass with nary a word from that same body. In the last twenty years, only twice has the Security Council condemned terrorist acts against Israel without simultaneously condemning assorted Israeli actions – both times in the form of a Presidential Statement, once in 1995 and once in 1996.[29] Israeli violence, as demonstrated previously, has resulted not only in Presidential Statements but also in Security Council resolutions, even when the violence in question was the act of an individual who was condemned by the Israeli public and the Israeli authorities. This was the case with Resolution 904 in 1994, which rightly censured the murder by Israeli Baruch Goldstein of Palestinian worshippers in Hebron.[30] The question, however, is why similar atrocities perpetrated against Israelis have gone and continue to go seemingly unnoticed by the Security Council. In 2002, a Palestinian suicide bomber murdered thirty Israelis in Netanya’s Park Hotel during Passover;[31] this is greater than the number of Palestinians murdered by Baruch Goldstein, yet was not deemed worthy ofa Security Council reaction.
Although over a thousand Israeli civilians were murdered during the Second Intifada, the Security Council remained strangely silent. This silence has persisted in recent years, as thousands of rockets have been fired into Israel from the Gaza Strip. Israel has sent several letters to the UN asking for unprovoked Palestinian violence against Israel to be condemned, but the Security Council and the rest of the UN maintain their silence.[32] Ron Prosor, Israel’s current ambassador to the UN, has complained about the UN’s failure to condemn Palestinian rocket fire and remarked upon the Security Council’s skewed priorities, saying that “the obsession with Israel and the ignoring of countries where civilians are tortured and killed undermines the credibility and calls into question the relevance of the Security Council”.[33]