Remarks at a UN Security Council Emergency Meeting on Violence in the Middle East
U.S. Ambassador Nikki Haley, May 15, 2018
Thank you, Madam President. Today’s session was called to discuss the issue of violence in the Middle East. We are all concerned about violence in the Middle East. The United States deplores the loss of human life. But there is a lot of violence throughout the region. And I will note that the double standard is all too common in this chamber, and working overtime today.
Last week, Iranian forces attacked Israeli positions on the Golan Heights by launching rockets from Syria. This was a reckless provocation and escalation that must be stopped. It is an example of regional violence that should occupy our attention here in the Security Council. Also last week, Iranian proxy forces in Yemen launched missiles into Saudi Arabia. It was not the first time they have done it. This too is regional violence that should occupy our attention here in the Security Council. In recent days, Hamas terrorists, backed by Iran, have incited attacks against Israeli security forces and infrastructure. That is violence that should occupy our attention, too.
The common thread in all of this is the destabilizing conduct of the Iranian regime – a regime that insists on promoting violence throughout the Middle East, while depriving its own people of basic human rights.
The United States welcomes a discussion of this violence in the Middle East. We welcome discussing the ways we can cooperate with each other to put an end to this violence. There is far too little discussion in the Security Council on Iran’s destabilizing presence in Syria, its promotion of violence in Yemen, its support for terrorism in Gaza, and its dangerous and illegal weapons buildup in Lebanon.
However, in the minds of some, today’s meeting was not called to discuss any of those examples of violence in the Middle East. Today’s meeting was called to discuss the violence that some suggest was connected with yesterday’s opening of the United States’ embassy in Jerusalem. For some people, the embassy opening is said to be a reason to engage in violence. How is that justified?
As our President said when he announced the decision in December, the location of our embassy has no bearing on the specific boundaries of Israeli sovereignty in Jerusalem or the resolution of contested borders. It has no bearing on Jerusalem’s holy sites. It does not prejudge whatever the parties might negotiate in a peace agreement. It does not undermine the prospects for peace in any way. And yet, for some, this is supposedly a cause for violence.
But let’s remember that the Hamas terrorist organization has been inciting violence for years, long before the United States decided to move our embassy.
In recent days, multiple news organizations have documented the Hamas incitement in Gaza. They have reported that Hamas maps and social media show the fastest routes to reach Israeli communities in case demonstrators make it through the security fence. They have reported on Hamas messages over loudspeakers that urge demonstrators to burst through the fence, falsely claiming Israeli soldiers were fleeing, when in fact, they were not. The same loudspeakers are used by Hamas to urge the crowds to “Get closer! Get closer!” to the security fence.
Hamas has attacked the Kerem Shalom crossing, the biggest entry point in Gaza for fuel, food, and medical supplies. This is how determined they are to make the lives of the Palestinian people miserable. They light Molotov cocktails attached to kites on fire and attempt to fly them into Israel to cause as much destruction as possible. When asked yesterday why he put a swastika on his burning kite, the terrorist responded, “The Jews go crazy when you mention Hitler.”
This is what is endangering the people of Gaza. Make no mistake: Hamas is pleased with the results from yesterday.
I ask my colleagues here in the Security Council, who among us would accept this type of activity on your border? No one would. No country in this chamber would act with more restraint than Israel has. In fact, the records of several countries here today suggest they would be much less restrained.
Those who suggest that the Gaza violence has anything to do with the location of the American embassy are sorely mistaken. Rather, the violence comes from those who reject the existence of the state of Israel in any location. Such a motivation – the destruction of a United Nations Member State – is so illegitimate as to not be worth our time in the Security Council, other than the time it takes to denounce it.

Col. Kemp: 'Hamas wanted killing of their own people'

Colonel Richard Kemp, former commander of British forces in Afghanistan: "I’m here on the border in Gaza with some soldiers from the IDF, whom the world's media is condemning for 'massacring Palestinian civilians.' These are the same as British soldiers, American soldiers, soldiers from any other democratic army. They're doing their job, they're working to rules of engagement; they're trying to defend their country.”“What they don’t deserve is to be condemned and blamed for the deaths of Palestinian civilians from Gaza, which has deliberately been caused by Hamas. That's what Hamas wanted — Hamas wanted the killing of their own people. The [Israeli soldiers] here are not responsible for that; they're responsible for protecting the lives of their civilian population in Israel, which they're doing extraordinarily well."

Yesterday’s opening of our embassy in Jerusalem is a cause for celebration for the American people. Moving the U.S. embassy to Jerusalem was the right thing to do. It reflects the will of the American people. It reflects our sovereign right to decide the location of our embassy – a right that everyone in this room claims for their own country. Importantly, moving our embassy to Jerusalem also reflects the reality that Jerusalem is the capital of Israel. It has served as Israel’s capital since the founding of the state. It is the ancient capital of the Jewish people. There is no plausible peace agreement under which Jerusalem would no longer remain the capital of Israel. Recognizing this reality makes peace more achievable, not less.
The United States is prepared to support peace negotiations and a peace agreement in every way. We want nothing more than peace. A peace in which people of all faiths are free to worship in Jerusalem. A peace in which the rights of all people are respected, and the future prospects of all people is bright. That peace will only be achieved if it is rooted in the realities that too many choose to deny. The United States’ action yesterday promoted the reality and the desire for peace. It is our sincere wish that the nations of the world will join us in this pursuit of credible, realistic, and enduring peace.
As I conclude, I want to take a moment to mark the 70th anniversary of Israel’s independence. In this United Nations Security Council, on behalf of the American people, I congratulate our friends in Israel on the remarkable achievement of 70 years of independence. From humble and desperate beginnings, a proud people have realized the Prophet Isaiah’s vision of a light unto the nations. May the next 70 years be ones of strength, of hope, and of peace.
Thank you. 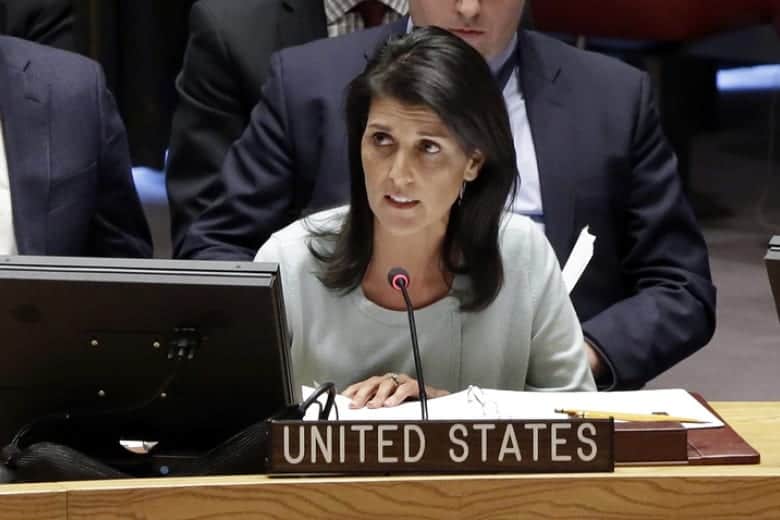