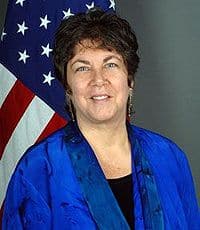 In a speech delivered yesterday before the superb Canadian Institute for the Study of Anti-Semitism — before whom I had the pleasure to speak recently in Winnipeg — Hannah Rosenthal, the U.S. Special Envoy to Monitor and Combat Anti-Semitism, addressed the “increasing tendency of blurring the lines between opposition to the policies of the State of Israel and anti-Semitism.”

Citing Natan Sharansky’s 3-D test to identify where sharp but legitimate criticism crosses the line into anti-Semitism — namely, where there is demonization, delegitimization or double standards — Rosenthal provided examples of such anti-Semitism occurring at the United Nations:

In the recently concluded UN Human Rights Council session, once again a grossly disproportionate number of the resolutions targeted Israel. Clearly, this is holding Israel to a different standard. No less, when the United Nations first passed its “Zionism is Racism” Resolution that singled out Israel as the world’s only racist country, the Khmer Rouge in Cambodia was committing genocide and receiving little or no attention for their crimes against humanity.

Rosenthal added that it was important for the US to be present at such bodies in order to fight from within.

UN Racism Expert Condemns Antisemitism – But It Is Not Enough