We urge your intervention to stop the illegal censorship by the United Nations Office of the High Commissioner for Human Rights (OHCHR), acting as Secretariat for both the Committee on the Rights of the Child (CRC) and the Human Rights Council (HRC), of our written submissions documenting Palestinian violations of children’s rights.

As you know, United Nations Watch is accredited as a non-governmental organization in Special Consultative Status with ECOSOC, and has the right under the United Nations Charter to participate in and contribute to UN human rights bodies.

OHCHR Censorship of UN Watch’s Submission to the CRC

The CRC conducted its first-ever review of Palestinian compliance with the Child Rights Convention on January 28-29, 2020. That review was preceded by a pre-sessional meeting which took place in June 2019 with the participation of a few pre-selected NGOs by invitation only.

UN Watch submitted a 25-page legal brief to the Committee on March 1, 2019 and requested to be invited to the pre-sessional meeting. Yet we were excluded from the meeting and our legal brief was never published online.

When asked why UN Watch had not been invited to the pre-sessional meeting, the Committee secretariat could not provide a clear explanation, saying only that the decision was made by the committee members themselves based on the relevance of the report and the rules—but they did not indicate what rules or where such rules could be found.

Furthermore, when UN Watch asked why its report, which relies solely on publicly available material found on the internet, was not being published on the Committee’s website, the secretariat stated it was due to the report containing names and images of children, an ostensible violation of child privacy rights. Notably, this objection was not made known to UN Watch until the day of the review—January 28, 2020—although the committee had the report since March 2019; and despite repeated inquiries from UN Watch about why the report was not on the website. Moreover, even after UN Watch provided the Committee with a redacted version of the report, the Committee refused to publish it.

OHCHR Censorship of UN Watch’s Submissions to the HRC

Specifically, on June 3, 2019, we submitted two written statements on these topics which were not published for the Council’s 41st session:

We only received a response a few weeks later, on 12 July 2019, after we had emailed as well as called the NGO Liaison office. On the phone, we were told vaguely that the statements were being reviewed by the legal office in New York, due to unspecified “legal questions.”

Then, on 30 July 2019, we received a short email from the NGO Liaison Office quoting from ECOSOC Resolution 1996/31 in regard to written statements, and stating the following:

“We therefore draw your attention to the need for written statements submitted to be relevant to the work of the Human Rights Council. Your organization is also reminded that…written statements containing personal attacks against individuals are not in order.”

This general and vaguely worded OHCHR email failed to identify any specific problem or concern with our written statements, and we do not understand what it refers to.

We must assume, based on the email, that the written statements were effectively rejected. This is alarming. If the Secretariat is rejecting statements, at a minimum it should advise the NGO of the specific objections and allow the NGO an opportunity to address the issues in time for the statements to be published during the relevant session. NGOs cannot be made to guess the Secretariat’s objections.

Moreover, on February 3, 2020, UN Watch again submitted to the Council two written statements on Palestinian violations of children’s rights for its current 43rd session. Again, OHCHR has refused to publish the statements, without giving any notice or explanation to UN Watch.

It is a violation of our rights under the United Nations Charter that OHCHR is actively censoring all of our evidentiary submissions on Palestinian violations of children’s rights. We urge you to take immediate action to ensure that our written submissions to the Child Rights Committee and the Human Rights Council on these issues are published forthwith. 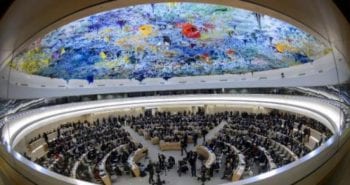