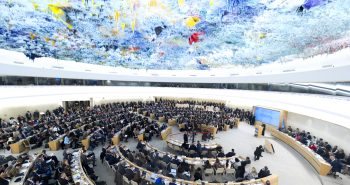 Two submissions (click here and here) were submitted to the UN in June for the 41st session of the UNHRC but were never published. The UN human rights office refused to identify any specific problems with the submissions, saying only that written statements must be “relevant to the work of the Human Rights Council.”

UN Watch has again sent two similar submissions for the current 43rd session of the UNHRC, and these too remain unpublished.

Moreover, ahead of the review of the Palestinian Authority by the 18-member Committee on the Rights of Child, which just concluded on February 13th, UN Watch submitted a 25-page legal brief documenting Palestinian abuses of children’s rights, and requested to be invited to the pre-sessional NGO meeting with the UN experts. (See article on UN Watch’s brief.)

Yet, UN Watch was excluded from the meeting and its legal brief was never published. The UN human rights office refused to explain its actions, and ignored repeated email requests.

When approached later during a UN session, an official said the decision to exclude UN Watch from the meeting was made “by the committee members themselves,” based on “the relevance of the report”, and “the rules”—but the office neither indicated what rules nor where any such rules could be found.

Asked why UN Watch’s brief (which relies solely on publicly available material found on the internet) was not being published on the UN website, the secretariat said it was because the document contained names and images of children, an ostensible violation of child privacy rights.

However, UN Watch’s letter to Guterres notes that “this objection was not made known to UN Watch until the day of the review—January 28, 2020—although the committee had the report since March 2019; and despite repeated inquiries from UN Watch about why the report was not on the website. Moreover, even after UN Watch provided the Committee with a redacted version of the report, the Committee refused to publish it.”

Indeed, the only NGO submissions published on the child rights committee’s website were those submitted by pro-Palestinian NGOs which did not address issues of incitement of children in the Palestinian curriculum and education system or Palestinian terrorism against Israeli children.

“In its repeated policy and practice of censoring UN Watch, the world body breaches its own bedrock principles of freedom of speech,” said UN Watch Executive Director Hillel Neuer. “We refuse to be silenced.”

“The same UN human rights system that obsessively targets Israel in one-sided resolutions is now trying to grant impunity to Palestinian abuses of children’s rights, which suggests that the UN’s commitment to universal human rights may not be universal after all.”