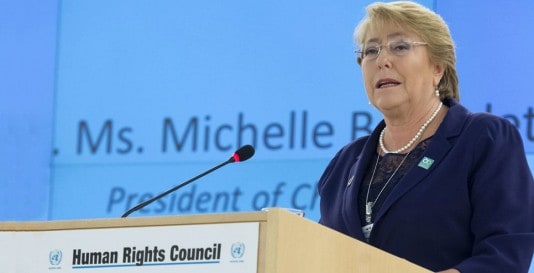 GENEVA, February 12, 2020 – The office of UN human rights chief Michelle Bachelet today released an unprecedented blacklist of companies doing business with Israelis living in the Jewish Quarter of Jerusalem and other areas over the 1949 Green line claimed by Israelis and Palestinians.

The controversial database of companies doing business with Israeli settlements, which Bachelet’s office has yet to produce on any other state, was mandated by a March 2016 resolution of the UN Human Rights Council that was sponsored by Kuwait on behalf of the 22-member Arab Group, Pakistan on behalf of the 56-nation Islamic group, along with Sudan, Venezuela, Algeria, Bahrain, Bolivia, Chad, Cuba, Djibouti, Ecuador, Egypt, and Libya.

“Dictatorships initiated this blacklist not because they care about human rights, but to divert attention from serial rights abuses committed by council members like Venezuela, Libya, and DR Congo, by scapegoating the Jewish state,” said Hillel Neuer, executive director of the Geneva-based watchdog organization.

UN Watch has published a detailed Myth & Facts on the Blacklist.

“Doing business in disputed territories has never been prohibited under international law, nor, until today, subject to a UN blacklist. For example, the EU has business and financial dealings in Moroccan-occupied Western Sahara and in Turkish-occupied Northern Cyprus,” said Neuer.

“Curiously, out of more than 100 territorial disputes in the world today, including in Tibet, Kashmir, Crimea, Western Sahara and Northern Cyprus, the UN chose only to blacklist companies doing business in Israel’s disputed territories,” he added.

“As several major democracies wrote the UN, the world body has no legal mandate to tell companies where they should or should not operate. Moreover, if this were really about human rights, then the key factor would be a consideration of whether Palestinian human rights are actually violated, yet that’s ignored.”

“Sadly, this is one more example of the Palestinian hijacking of UN bodies to promote a one-sided political agenda that fosters conflict instead of advancing peace.”

“High Commissioner Bachelet, who should be standing up for the UN Charter principles of universality and equality, has now allowed her office to become a tool for the discriminatory anti-Israel BDS movement, which singles out the Jewish state for boycott, divestment and sanctions. With the blacklist, the UN has now become Ground Zero for global BDS.”

Click here for Myths & Facts on the UN “Settlement Database”