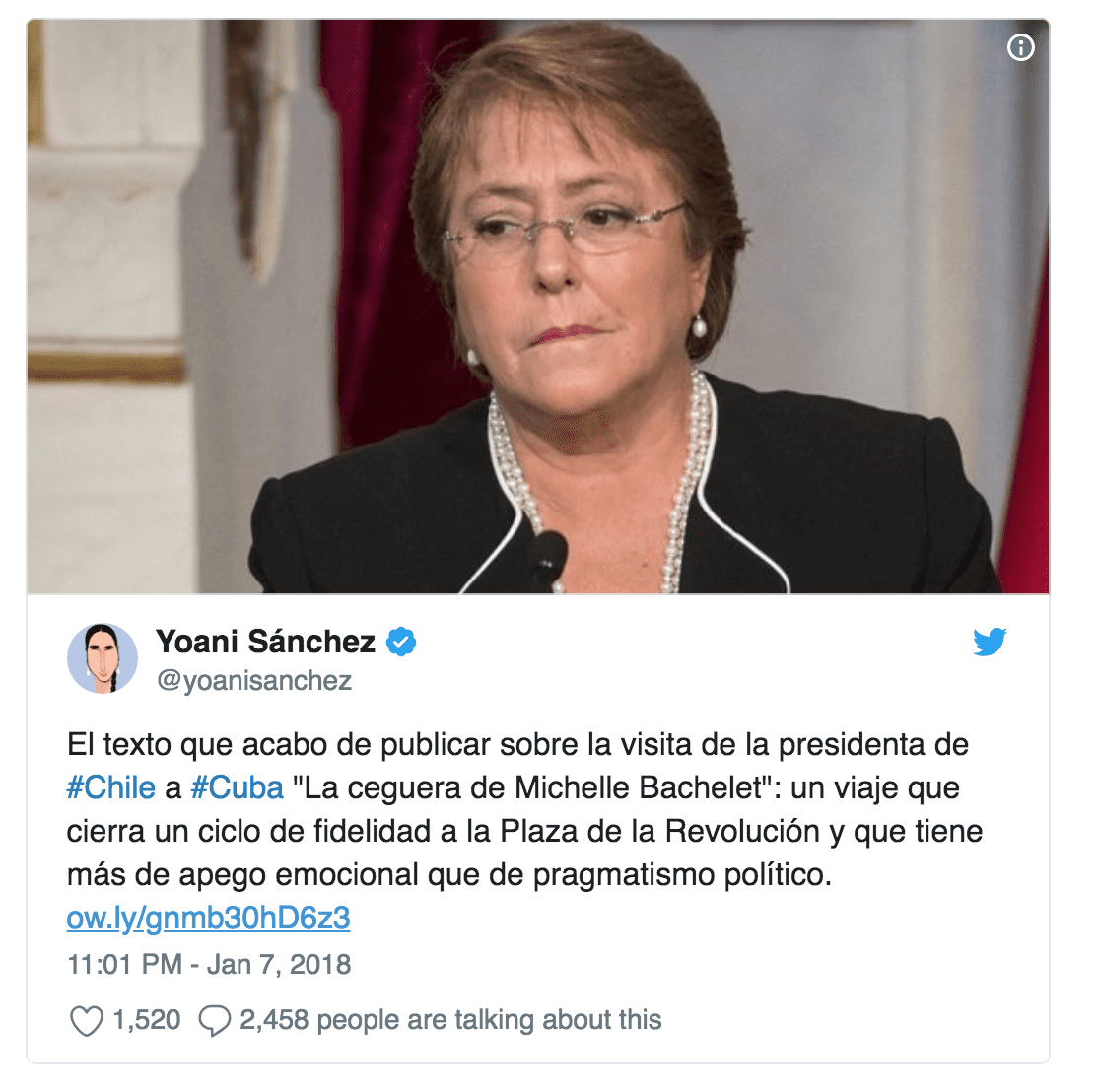 GENEVA, August 10, 2018 – The non-governmental human rights group UN Watch congratulated Michelle Bachelet on her appointment today as UN human rights chief, but joined Amnesty International, UNA-UK and other NGOs in criticizing the lack of transparency of the rushed process.

In particular, UN Watch regretted that Bachelet has not yet responded to questions that were raised over her spotty record on supporting human rights in Cuba, Nicaragua and Venezuela.

In a statement released on Wednesday, UN Watch had asked to meet the former Chilean president to obtain clarifications.

“But she has a controversial record when it comes to her support for the human rights abusing governments who rule Cuba, Venezuela and Nicaragua, and we need to know how she plans to address these urgent situations.”

• 2018 Cuba Visit: Bachelet’s visit to Cuba earlier this year, one of her last trips before leaving office, was strongly criticized by members of her own party and others, especially human rights activists. She met with the last military dictator of the Americas, Gen. Raúl Castro, without seeing any member of Cuba’s peaceful opposition.

Opposition leader Rosa María Payá asked Bachelet to meet with human rights dissidents during her trip to the island, but that request was completely ignored. “She is rewarding those responsible for the longest dictatorship in the region,” said Payá.

“Her closeness to Havana is marked by an ideological nostalgia that clouds her view and her ability to recognize the lack of rights that mark the lives of Cubans,” said prominent Cuban human rights blogger Yoani Sanchez.

“In each of her two terms,” wrote Sanchez, “Bachelet avoided showing sympathy for the cause of Cuban dissidents and has declined any contact with the countless activists from the island who have visited her country in recent years. From her mouth, there has never been any condemnation of the political repression systematically carried out by Raúl Castro, even when the victims are women.”

• Praised Cuban Dictator: On Fidel Castro’s death, she called him “a leader for dignity and social justice in Cuba and Latin America,” a statement that was sharply criticized by Chilean political leaders across the spectrum, who said it showed insensitivity to victims of Cuban state repression.

• Praised Hugo Chavez: Bachelet eulogized Chavez — whose legacy in Venezuela is mass hunger, jailed opposition leaders and a failed state — for “his most profound love for his people and the challenges of our region to eradicate poverty and generate a better life for everyone and his profound love for Latin America.”

• Refusal to Condemn Maduro, Slammed by HRW:  Bachelet was called out by Human Rights Watch’s Latin America chief in July 2017 for her “serious error” of “failing to characterize the Nicolás Maduro regime as a dictatorship, or at least as a regime that broke the constitutional order,” as affirmed by 20 countries in the OAS. “The most serious thing,” said José Miguel Vivanco, “is that the president [Bachelet] continues to insist that the problem of Venezuela is the lack of dialogue, suggesting that there is a kind of shared responsibility.”

• Quiet on Nicaragua Killings: Over the past months of the Ortega regime’s killing of hundreds of protesters, Bachelet’s twitter account shows not a single tweet mentioning Nicaragua or its victims.

UN Watch expressed regret that none of the above concerns were addressed before her appointment was approved, only two days after her name was put forward by the Secretary-General.

• No Transparency: The appointment was treated as an internal recruitment process, without elements such as a public list of candidates and vision statements, as for the most recent Secretary-General appointment process. Transparency over such an important appointment would have helped to improve public perceptions of the High Commissioner’s office, strengthen Bachelet’s legitimacy and would be in line with the UN’s own best practices. Only one candidate, Nils Melzer, publicly declared his candidacy, and shared his vision for the role.

• Timing: The official process to find the next High Commissioner was triggered less than three months before the mandate begins. Bachelet will have the shortest preparation time in the role’s history.

UN Watch has been a leading voice at the United Nations Human Rights Council for human rights victims in Cuba, Venezuela and Nicaragua.