GENEVA, April 8 – One day after Russian President Vladimir Putin was criticized during a visit to Germany by Chancellor Angela Merkel for restricting non-governmental organizations, the Geneva-based human rights group UN Watch today announced that its annual human rights award will be given to Garry Kasparov, one of Russia’s most prominent dissidents and democracy activists, and a former world chess champion.
“UN Watch has decided to grant the Morris B. Abram Human Rights Award to Garry Kasparov for his long and non-violent struggle for fundamental human rights in Russia,” said executive director Hillel Neuer. “Mr. Kasparov is not only one of the world’s smartest men, he is also among its bravest.”
UN Watch’s annual human rights prize is named after the esteemed U.S. civil rights advocate, diplomat and United Nations delegate who founded the watchdog NGO in 1993. UN Watch is best known for organizing the annual Geneva Summit for Human Rights and Democracy, a key gathering for dissidents, and for bringing victims to testify before the United Nations Human Rights Council, including from China, Cuba, Egypt, Libya, North Korea, Syria, Sudan and Venezuela.

Mr. Kasparov has been beaten and jailed by Russian authorities for daring to challenge president Vladimir Putin. Click here for the video of his beating on August 17, 2012 for protesting the arrest of the Pussy
Riot activist-musicians.
Mr. Kasparov has been a key voice on the international scene to promote U.S. passage of the Magnitsky Act of sanctions against Russian officials and to appeal for similar measures in other countries. He was listed byTime Magazine as one of the Top 100 people whose moral example is transforming the world.
“Russia’s status in the world and at the UN entails responsibility,” said Neuer. “Russia is in breach of several international agreements to which it is a signatory, as well as of its own provisions concerning political rights. Article 2 of Russia’s constitution guarantees its citizens ‘the recognition, observance and protection of human and civil rights and freedoms.’ In practice, these freedoms are being systematically violated.”
Mr. Kasparov will receive the 2013 Morris B. Abram Human Rights Award in Geneva on Wednesday, June 5, 2013, at a gala dinner, attended by the diplomatic community, marking UN Watch’s 20th anniversary. The event will be held in Geneva’s historic Hotel des Bergues, site of the first assembly of the League of Nations in 1920.
Morris B. Abram (1918-2000) worked closely with Rev. Martin Luther King, winning key legal battles for the equal rights of African-Americans. Over three decades, Abram was a leading figure at the UN Commission on Human Rights and the UN Sub-Commission on the Promotion and Protection of Human Rights. 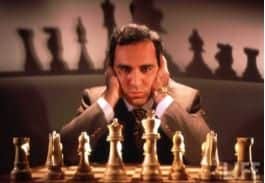 Garry Kasparov was born in 1963 in Baku, Azerbaijan. He came to international fame as the youngest world chess champion in history in 1985 at the age of 22. He defended his title five times, including a legendary series of matches against arch-rival Anatoly Karpov. Kasparov broke Bobby Fischer’s rating record in 1990 and his own peak rating record remained unbroken until 2013.
In 2005, then in his 20th year as the world’s top-ranked player, Kasparov retired from competitive chess to join the vanguard of the Russian pro-democracy movement. He founded the United Civil Front and organized the Marches of Dissent to protest the repressive policies of Vladimir Putin.
In 2012, Kasparov was elected to the Coordinating Council of the united opposition movement. In the same year, he was named chairman of the New York-based Human Rights Foundation, succeeding Vaclav Havel.
Garry and his wife Daria are active with the Kasparov Chess Foundation in promoting the teaching of chess in education systems around the world. Now in over 3500 US schools, the foundation recently launched centers in Europe and Africa, with South America soon to come. 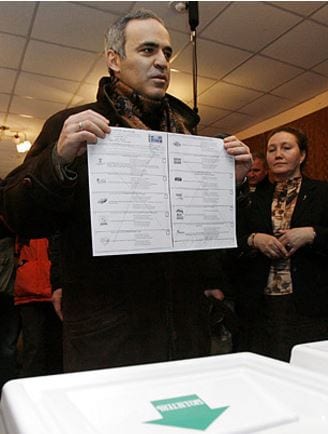