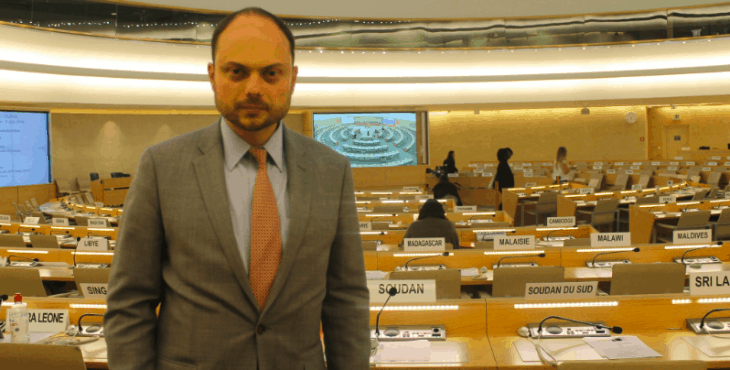 Together with partner Ingenieurs du Monde, UN Watch brought leading Russian Dissident Vladimir Kara-Murza to address the UN Human Rights Council on July 1, 2019. Kara-Murza addressed the situation of political and religious prisoners in Russia, urging the international community to act out for 297 known prisoners of conscience.

I am Vladimir Kara-Murza, a Russian democracy activist, and I am honoured to address the United Nations Human Rights Council on behalf of Ingenieurs du Monde.

In his Nobel Lecture in December 1975 Andrei Sakharov named 126 prisoners of conscience in the Soviet Union. In July 2019, according to the Memorial Human Rights Centre, there are 297 political and religious prisoners in Russia. Both are conservative estimates. But they give an idea.

Oleg Sentsov, a Crimean film director who protested against the annexation. Anastasia Shevchenko, an opposition activist and a single mother, the first person arrested under the new law on “undesirable organizations.” Alexei Pichugin, the remaining hostage of the “Yukos Affair,” who, after 16 years, is Russia’s longest-serving political prisoner. The UN Working Group on Arbitrary Detention has demanded his immediate release.

Just three names out of 297. And the figure keeps growing: in the last four years, the number of political and religious prisoners in Russia has increased six-fold.

Their continued incarceration violates not only Russia’s Constitution, but our country’s obligations under the Universal Declaration of Human Rights and the International Covenant on Civil and Political Rights, as well as the OSCE Vienna Concluding Document and the European Convention on Human Rights and Fundamental Freedoms. It is time for the UN Human Rights Council to speak out on their behalf – and to seek justice for those who are deprived of it at home.