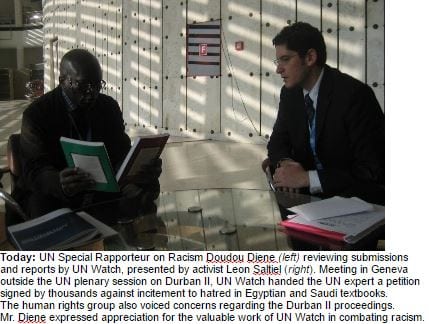 Geneva, April 24, 2008 — According to diplomatic sources, South Africa has now dropped its offer, announced by President Mbeki in February, to host next year’s UN sequel to the controversial 2001 Durban conference on racism, reported UN Watch, a Geneva-based human rights monitoring organization. Instead, the event is now slated for a European city in April or May 2009.
“The expected adoption of a controlled UN headquarters as the venue, be it Geneva, Paris, or Vienna, is something we fought for, as one of many necessary steps to prevent a repeat of the ugly street scenes of Durban in 2001,” said Hillel Neuer, UN Watch executive director.

“Regrettably, however, events from this week’s preparatory session only underscore the fears of many that the 2009 conference will pervert the language of anti-racism for political goals, and cast a shadow upon the reputation of the UN as a whole,” he said.

Neuer pointed to several worrying developments from this week’s meeting:

• Iranian Rejection of Canadian NGO. The entire first day was devoted to an Iranian motion seeking to bar a Canadian Jewish organization from the conference, with the public encouragement of the Palestinian, Egyptian and Algerian representatives. “When a conference that purports to be against racism opens with a racially-motivated objection, it’s repulsive,” said Neuer. He credited the European Union and the office of the UN High Commissioner of Human Rights for “taking the floor to oppose the groundless singling-out of a legitimate NGO.”

All of this was compounded by the statements of Algeria’s Idriss Jazairy denying that anti-Semitism is against Jews. Instead, said Jazairy on April 22, “anti-semitism targets Arabs who are also Semites, and by extension, the whole Muslim community.”

Neuer said the attempt by Iran and the Arab and Islamic blocs is “also part of a larger assault at the UN Human Rights Council against the participation of civil society groups, an effort by repressive regimes to silence critical voices.”

• Anti-Western Campaign.  There were renewed efforts by the Islamic bloc, in this week’s speeches and proposals, to indict Western democracies for the “defamation of Islam.” Neuer said that the fundamental flaw of the Durban II process is that, like the 2001 event, it is proving itself to be “an exercise whereby the world’s most tolerant democracies—however flawed, the ones that have made the greatest progress in enacting protection for minorities—are accused of racism and discrimination by authoritarian regimes that in their very essence embody human rights violations, by systems of oppression that persecute their minorities as a matter of course.”

Such attacks on democracy were in evidence on Tuesday when Algeria said that “freedom of expression spreads hatred and violence and leads to the burning of mosques in ‘advanced’ countries.” Similarly, Syria spoke of “crimes that are perpetrated in the name of democracy,” and described “countries that advocate democracy” as “killers [that] give a free hand to perpetrate massacres.”

Neuer said that “at root, the Durban exercise is conceived as a globally organized assault against the democratic idea, an attack upon the premise that liberal democracy is superior to systems of oppression.”

At the same time, said Neuer, “governments that perpetrate today’s worst ethnic or sectarian-based killings—Sudan’s race-based murder of 300,000 black Africans in Darfur, the tribal bloodletting in Kenya, China’s cultural oppression and shootings of Tibetan Buddhists—all these violators are already being granted effective immunity under Durban II.”

Similarly, the discussion of colonialism and slavery is focusing disproportionately on the historic sins of Western states, while omitting mention of more recent Russian colonialism in Armenia, Ukraine and other neighboring states, ongoing Chinese colonialism in Tibet, or contemporary slavery in Sudan. According to a new UN document on the budget for Durban II’s planning sessions, China and Russia are the greatest contributors to the voluntary fund.