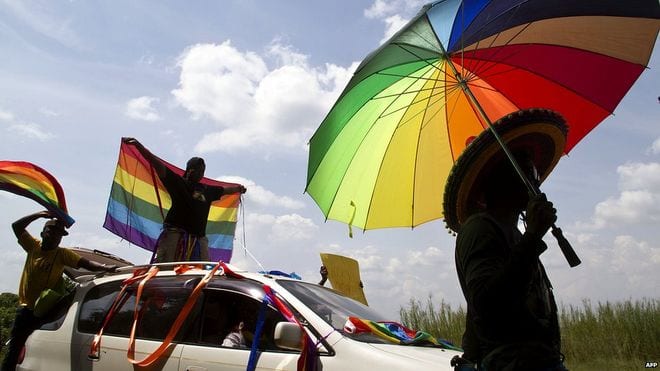 SOUTH AFRICA, often dubbed the “rainbow nation,” has come under increased criticism this week following its decision to abstain from a key vote in support of gay rights during the last session of the UN Human Rights Council — not least since South Africa’s progressive 1996 Constitution is unique for its explicit proscription of discrimination on the grounds of sexual orientation.

Nozipho Mxakato-Diseko, South Africa’s Ambassador to the UN, explained the decision yesterday on national radio. Her efforts to justify South Africa’s abstention on the vote drew the ire of South Africa’s LGBTI and human rights community.

According to the interviewing journalist, Redi Tihabi, Mxakato-Diseko justified her government’s position as follows:

That the rainbow nation felt the need to abandon its principles at the UN in order to align itself with the 38 African nations which criminalize homosexuality is deeply regrettable. Although South Africa domestically has a good record in promoting and protecting gay rights, its recent actions in this domain have been far from exemplary. South Africa should serve as an example of tolerance and lead the way for a more inclusive continent. Instead, it chooses to engage in a race to the bottom as it systematically backs down from speaking out in favor of LGBTI rights on the international stage.

South Africa’s decision not to support gay rights at this vote is symptomatic of a broader problem at the Human Rights Council — countries typically subordinate the promotion and protection of human rights to geopolitical or other interests. “Solidarity” with Sub-Saharan Africa is deemed more important than acting in line with the nation’s constitutional commitments or for the promotion of genuine human rights. This is neither the first nor the last time that we states prioritize political maneuvering over human rights at the UN.