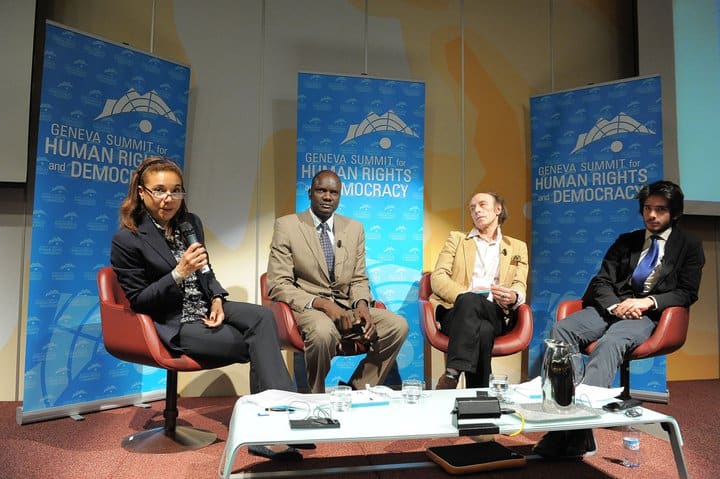 GENEVA, March 15 –  Dissidents and human rights activists from around the globe gathered today for the 2011 Geneva Summit for Human Rights and Democracy, held in parallel to the main annual session of the UN Human Rights Council. Click here for program.  Below is a summary of the first panel on the situation in Southern Sudan after the referendum.

John Dau, activist and refugee from South Sudan, told the story of his experiences as a “lost boy” of Sudan. His five-year ordeal began when government forces from the North attacked his village in Southern Sudan. He was separated from his family at twelve years old.

Until he reached safety in Kenya at the age of seventeen, he lived as a refugee, hiding from government forces that targeted young boys from the South to keep them from growing up to be rebel soldiers. He and his fellow lost boys froze, starved, and suffered from thirst, with many of them falling prey along the way to the elements and to attacks by air and ground forces.

Dau was lucky enough to arrive finally in Kukuma refugee camp in Kenya, where he was taken care of and granted the opportunity to go to school for the first time in his life. Selected to come to the United States, Dau got a college education and started the John Dau Foundation to build clinics in South Sudan.

Dau highlighted not only the hardships of his own experience, but the ongoing complicity of the Sudanese government in the atrocities suffered by the people of South Sudan. The government is still funding and equipping proxy groups in South Sudan after the referendum  to destabilize the new state, in much the same way that it has been financing and equipping Janjaweed militia groups to terrorize and murder the people of Darfur.

Dau ended his speech with an impassioned plea for the international community to pay more attention to the situation in Southern Sudan to prevent it from becoming a full-blown genocide.

Juan Branco, president of French pro-democracy institute Jeune République, and an official with the International Criminal Court, addressed the efforts to bring legal action against Sudanese president Omar al-Bashir and members of his government for their crimes. The arrest warrants have been issued for al-Bashir by the ICC, and it is now up to the international community to react, particularly civil society.

Bernard Schalscha, Director of Collectif Urgence Darfour, spoke about the situation in the Darfur region of Sudan. The racial motivation for the violence in Darfur is misunderstood by outsiders, who see no racial difference between Darfuris and the government officials in Khartoum who sponsor the Janjaweed militias.

Members of the government are Islamists with Arab ancestry, and see the African, less-Orthodox Muslims of Darfur as both racially and religiously inferior. The attacks on the Darfur region, therefore, are part of a genocidal campaign by the government against Darfuris because of their ethnic and religious identity.

While the death toll in Darfur has been stabilized for the moment, the area is still extremely dangerous and the crisis continues. Bandits and Janjaweed militias routinely terrorize the population, rape women who leave the camp for firewood, and attack aid groups bringing in supplies. There is near-total impunity for these crimes, both for individual perpetrators and the government officials who encourage and equip them. In one specific case an al-Bashir henchman was promoted to Minister of Humanitarian Affairs after the ICC accused him of crimes against humanity.

Click here for video of the panel, and of other inspiring speakers at the 2011 Geneva Summit for Human Rights and Democracy.