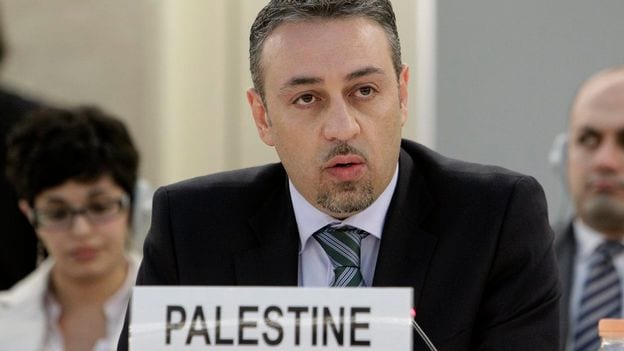 [O]n February 16, in a separate conversation with Charge and PolCouns, PA DPR Zuhairi was visibly upset by Special Rapporteur for Human Rights in the OPT Richard Falk’s reference to Hamas in his draft report. In para 8, Falk states that UNGA resolution 64/10 calls on Hamas – vice the PA – to undertake investigations. Zuhairi argued that he had too often corrected Falk’s many errors and that this latest misguided effort by Falk had gone too far.

Palestine had a an initial plan of action to stymie Falk, and detailed the reasons:

Zuhairi said he might use the February 18 HRC organizational meeting to seek to block Falk’s report from being presented to the HRC on the grounds that Falk overstepped his mandate, had addressed issues outside his brief, and had failed to appropriately recognize a UNGA resolution (not to mention the legitimate authority of the Pa).

In fact, that is exactly what happened: amazingly, in 2010, as was reported by UN Watch here, the Palestinians actually blocked Richard Falk’s report for several months.
That was Feb. 16, 2010. Two days later, the Palestinian Authority delegate went ahead and told the UN to delay Falk’s report, giving this interesting reason:

Taking into account the number of reports related to the situation of human rights in the Occupied Palestinian Territories under agenda item 7, in order to treat them with the most appropriate manner, I request to postpone the report of Professor Richard Falk to be considered during the 14th session of the HRC.

That’s right: the Palestinians were complaining that there were just too many reports on Israel! The U.N. obeisantly rescheduled Falk’s report and the surrounding debate, in deference to the PLO’s political agenda. In response, Hamas — whom Falk has compared to anti-Nazi freedom fighters — quickly went to bat for their beloved Richard Falk.
Now back to the 2010 Palestinian meeting with the Americans. Interestingly, the PA objected to Falk’s use of Nazi metaphors:

Zuhairi also said he wished Falk would drop his repeated suggestions that Israel’s actions in the OPT be equated with the Holocaust. Such language has allowed Israel to justify its refusal to allow Falk to visit, and has limited his usefulness as a rapporteur.

And then Palestine urged Richard Falk to go:

In light of the reference to Hamas, Zuhairi said he had called Falk personally and asked him to step down, something Falk angrily rejected.

Zuhairi sought our advice on how best to approach the issue…

The Obama Administration rejected the Palestinian effort to remove Falk:

Charge and PolCouns, while acknowledging the problem of recognizing Hamas, told Zuhairi that the U.S. defended the independence of the special procedures mandate holders and that we objected to state’s use of the code of conduct as a means to muzzle rapporteurs.