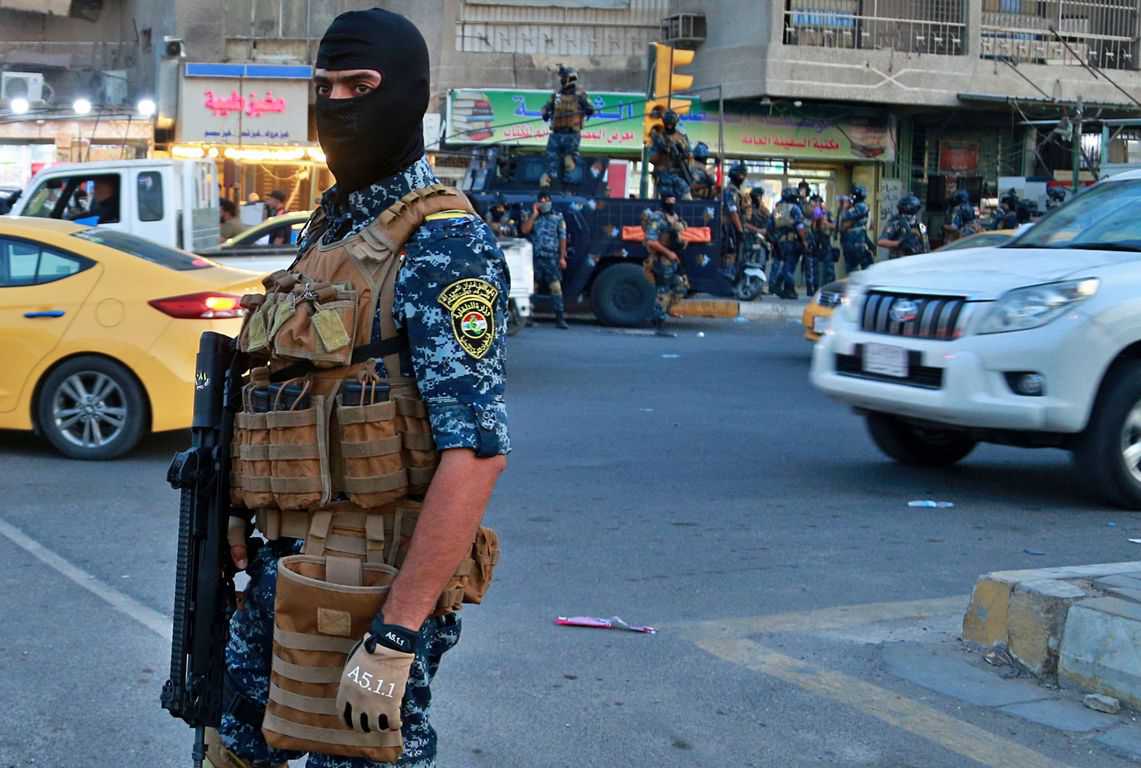 Iraq’s bid for re-election to a seat on the UN’s top human rights body should be rejected, as it fails to meet the basic membership criteria. The election of 14 new countries to the Human Rights Council will be held at the UN in New York on Thursday, October 17, 2019. See our full report on all candidates, and press release.

In a previous election to the UNHRC, Iraq won no less than 173 of 193 votes, and is expected to win today as well.

“Electing a government that uses Iranian-backed snipers to kill its own people as a UN judge on human rights would be like making a pyromaniac into the town fire chief,” said UN Watch executive director Hillel Neuer.

In its bid for a renewed UN Human Rights Council term, from 2020 to 2022, the Iraqi government submitted a list of voluntary pledges. Following are five of Iraq’s most absurd claims, contrasted with the reality.

Iraq’s UN Pledge #1: “Iraq strives to ensure harmony among cultures, religions and civilizations through respect, tolerance and solidarity to eliminate hate speech and disrespect to any kind of cultural differences.”

Reality: When Miss Iraq Sarah Idan took the floor at the UN Human Rights Council to support peace with Israel, the Iraqi Parliament’s Security and Defense Committee reportedly called for her Iraqi citizenship to be revoked, labeling her advocacy a “crime.”

Iraq’s UN Pledge #2: “Iraq emphasizes the role of Civil Society Organizations and other stakeholders as main partners towards developing the work of the Human Rights Council and permit those partners to address the Council on human rights issues.”

Reality: According to a December 2018 report by Minority Rights Group International and the Ceasefire Centre for Civilian Rights, “the outbreak of large-scale popular protests in Basra and other Iraqi cities has led to a wave of violent repression of civilian activists.”

Iraq’s UN Pledge #3: “Iraq reiterates its belief in the universality of Human Rights and the unwavering commitment to its principles, in terms of upholding the highest standards in the promotion and protection of human rights, in accordance with the mandate of the Human Rights Council.”

Iraq’s UN Pledge #4: “Iraq works on Women Empowerment and gender-equality through the launch of the National Report of Action Plan (2014-2018), in accordance with UNSC Resolution 1325 (2000) on Women, Peace and Security. Hence Iraq became the first country in the Middle East and North Africa to develop a national plan in line with the above-mentioned Resolution.”

Reality: Out of 149 countries analyzed for gender-equality, the World Economic Forum’s 2018 Global Gender Gap Report ranked Iraq 147th — behind only Pakistan and Yemen.

Iraq’s UN Pledge #5: “Iraq is proud of its ethnic and religious diversity and continues to protect this diversity from any kind of violation and heinous crime committed by ISIS, Al Qaeda and other terrorist groups.”

Reality: According to the USCIRF 2019 Annual Report, the Iraqi government continues to show a “lack of willingness or ability to provide proper security for vulnerable religious and ethnic minorities.”

Iraq has been beset by violence and instability for years. It has an ethnically diverse population comprised of both Sunni and Shiite Muslims, Christians, Yazidis, Kurds, and others. This has resulted in ethnic and sectarian fighting, which continues today in mixed areas.[1] From 2014 to 2017, Iraq was beset by a civil war in which various extremist Islamic groups, including Islamic State (IS) and Al Qaeda, sought to take control over the territory. At its height, IS controlled some 88,0000 sq. km in Syria and Iraq, including its Iraqi stronghold in Mosul.[2] In the course of its conquest, IS killed and enslaved thousands of Yazidis, more than 3,000 of whom are still unaccounted for.[3] In November 2018, more than 200 mass graves containing the remains of thousands of victims were found in parts of Iraq formerly controlled by IS.[4]

While IS was defeated in 2017, it is still a major perpetrator of atrocities, including suicide bombings, killing and abducting civilians, and attacking security forces and continues to pose a significant security threat.[5] On August 1, 2019, twin IS attacks killed at least seven members of the Iraqi Security Forces and wounded 16.[6]

Although Iraq holds democratic elections and its last election was generally considered to be free and fair, a number of factors hinder the ability of its officials to govern. These include widespread corruption and interference by outside forces, such as Iran.[7] Some militias that are part of the state-sponsored military operate independently and answer to Iranian authorities.[8] According to the parliamentary transparency commission, corruption has caused at least $320 million of state funds to disappear overt the last 15 years.[9]

Extrajudicial killings are committed by government forces, as well as terrorist groups such as IS and Iranian-aligned militias. More than 700 civilians were reportedly killed in the first eight months of 2018.[10] In April 2018, one of the Iranian-aligned militias killed Brigadier General Shareef Ismaeel al-Murshidi and two of his guards. In August, another of these groups killed three tribal sheikhs.[11]

Likewise, both the government and terrorist groups are responsible for the enforced disappearance of thousands.[12] Government forces also routinely torture detainees with impunity. Human Rights Watch reported that at least three people died from torture in prison facilities in Mosul in 2018, and the torture continued into 2019.[13] These groups also engaged in kidnapping and extortion.

Arbitrary arrests and due process violations are common, especially in terrorism cases. Suspects, including children, are routinely denied access to counsel and subjected to torture, forced confessions, and summary trials.[14] According to Human Rights Watch, approximately 1500 children are being held by Iraqi and Kurdish authorities for alleged ISIS affiliation.[15] In 2018, a number of IS suspects were given the death sentence after trials lasting as little as 20 minutes.[16]

In addition to the above, there are restrictions on civil liberties like freedom of the press and freedom of association. Journalists suffer harassment and intimidation and engage in self-censorship.[17] In 2018, there were a number of cases where the government prevented journalists from reporting ostensibly for security reasons, as well as cases of beatings, detentions and death threats against journalists.[18]

Social media posts on controversial topics can result in retribution. In December 2017, the family of Miss Iraq Sarah Idan was forced to flee the country after receiving death threats over her posting photos taken with Miss Israel on social media.[19] In July this year, the government of Iraq threatened to remove Idan’s citizenship over a UN speech criticizing Iraq and supporting Israel.[20]

Just this month, nearly 100 protesters were killed in anti-government protests, many by security forces. In July 2018, Iraqi security forces employed excessive force, including live ammunition, to suppress protests in Basra against corruption and poor infrastructure. According to the UN, at least twenty protesters were killed and many more were arrested or injured.[21] Journalists covering the protests were also detained.[22] In September 2018, one of the leaders of the protest, Iraqi women’s rights activist Suad al-Ali, was murdered in her car in Basra.[23] Other human rights activists have also been attacked.[24]

Iraqi women suffer violence and discrimination. For example, women cannot obtain a passport or government ID without consent of a male guardian. This severely restricts their freedom of movement and ability to access employment, education and social services.[25] Forced and early marriages are common; domestic violence is widespread. Other harmful traditional practices such as FGM, honor killings, temporary marriages, and trading women to settle tribal disputes persist.[26] Women from families associated with IS are subjected to sexual violence, including rape.[27] Half of the 3500 Yazidi women captured by IS in 2014 and subjected to sexual slavery are still unaccounted for.[28]

In September 2018, the female social media star Tara Fares was shot dead in Baghdad. Several other high-profile women associated with the beauty and fashion industry were also killed in 2018.[29]

Negative: At the General Assembly, Iraq backed human rights abusers when it supported a resolution denying the right to level sanctions against such regimes, and by voting to delay the work of the Special Rapporteur on violence against LGBT individuals. Iraq voted against a resolution speaking out for victims of human rights violations by Iran and abstained on resolutions that spoke out for victims of human rights violations by Russia and Syria. It also abstained on a resolution calling for protection of the rights to peaceful assembly and freedom of association.

[28] Maya Oppenheim, Yazidi rape survivors forced to abandon children of Isis to be able to return to community: ‘Drowning in an ocean of pain’, The Independent (Aug. 3, 2019), https://www.independent.co.uk/news/world/middle-east/yezidis-sinjar-massacre-rape-iraq-isis-fighters-children-a9037126.html.