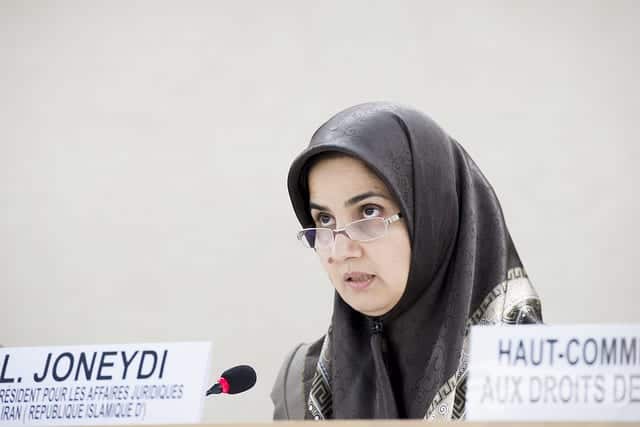 Heads of state and other dignitaries gathered in Geneva to open the 2019 session of the UN Human Rights Council, with one dictatorship after another taking the floor to cover up human rights abuses.
“The government of Yemen attaches special importance to human rights,” said Yemen‘s Prime Minister Maeen Abdul Maleek Saeed.
Turkey‘s Foreign Minister Mevlüt Çavuşoğlu said that “none of the advanced democracies present in this very council would have been able to ensure better than Turkey the full respect of human rights.”
Sergey Vershinin, Deputy Foreign Minister of Russia, announced Russia’s candidacy to rejoin the Human Rights Council. As a campaign promise of ensuring “the work of the Council is objective and free of bias.”
Council member Qatar’s Deputy Prime Minister, Sheikh Mohammed bin Abdulrahman bin Jassim Al Thani, praised the council, saying, “We welcome the joint efforts made by this council in protecting human rights. Qatar believes that this is the most effective tool to protect human rights.”
Meanwhile, just outside the Council chamber is a Qatari exhibit on preparations for the 2022 World Cup, showcasing its supposedly humane treatment of workers. In reality, exploited migrant workers in Qatar are subject to cruel living and working conditions and false salary promises.

No joke: Qatar showcases its humane treatment of workers in an exhibit on preparations for the 2022 World Cup at the UNHRC. In reality, exploited migrant workers in Qatar are subject to cruel living and working conditions and false salary promises. #Qatar2022 #HRC40 #FIFA pic.twitter.com/f5Y483YRzE

In the afternoon, Iran‘s Vice President Laya Joneydi was the only country in the world invited to address a high-level panel on the topic of multilateralism.
In thinly veiled language, the Iranian VP slammed America and the West.
“It is illusion to think that we could make ourselves great at the price of belittling others or by erecting big walls of exclusion. Could we protect ourselves from the adverse effect of climate change by erecting walls?”
She condemned “reckless disregard for rules, norms and agreements” by some states — even as her own government shows utter disdain and disregard for the human rights of its own people.
Joneydi herself has a problematic record, defending her president’s demands that she wear a chador because she respects the man “we all voted for.” According to Iranian rights champion Mariam Memarsadeghi, “Iranian women scholars were scared of [Joneydi]… Her propaganda holds up the injustice of [the Iranian] regime.”

Iranian VP Laya Joneydi—who will open up a high-level UN Human Rights Council session on Monday—defended her president’s demands that she wear a chador because she respects the man “we all voted for.” In reality, Iran does not have free or fair elections. https://t.co/qdTkx3OmgN

Iranian rights champion @memarsadeghi, on Iranian Vice President Laya Joneydi, who will open a high-level UN session on human rights on Monday: “Iranian women scholars were scared of her…Her propaganda holds up the injustice of this regime.” https://t.co/QXbZqhrhe3

Mr. President: Human rights victims around the world look to the United Nations to uphold its founding promises.
Thirteen years ago, in the resolution creating this Council, the UN promised to address gross and systematic violations.
The UN promised that Council members would uphold the “highest standards” of “promoting and protecting human rights.”
And the UN promised that this Council would, “eliminate double standards and politicization.”
Today, victims and supporters of human rights worldwide, have the right to ask this panel: Is the United Nations keeping its promises?
They have a right to ask:
• Why was Venezuela — whose Maduro government just days ago attacked innocent civilians, and burned trucks carrying life-saving humanitarian aid — elected to this Council, repeatedly over the past six years?
• Why is Saudi Arabia, which jails innocent blogger Raif Badawi, and subjugates women under a barbaric guardianship regime, a permanent member of this Council?
• By what logic did the UN also elect China, Somalia, Pakistan, Iraq, Qatar, Eritrea, DRC, Bangladesh, Cameroon and Cuba, as members of this Human Rights Council?
• Why has there never been a single resolution on violations by the government of Turkish President Erdogan, once again named as the world’s worst jailer of journalists?
• Why does this Council turn a blind eye as Zimbabwe crushes peaceful dissent, arresting human rights heroes like Pastor Evan Mawarire?
Finally: hundreds of political prisoners like Morad Tahbaz and Nazanin Zaghari-Ratcliffe have the right to ask: why has there never been a single urgent session or commission of inquiry on the abuses of the Islamic Republic of Iran, which oppresses women under a forced Hijab law, tortures political prisoners, and spreads terrorism throughout the Middle East and beyond?
And they have a right to know: by what human rights criteria why did the Council invite the Vice-President of Iran to the dais of this panel?
Is it not the height of cynicism to invite an Iranian official to speak, as she did just now of, “disregard for rules and norms,” when her government—as we speak—shows utter disdain and disregard for the human rights, and lives, of their own people?
Thank you, Mr. President.