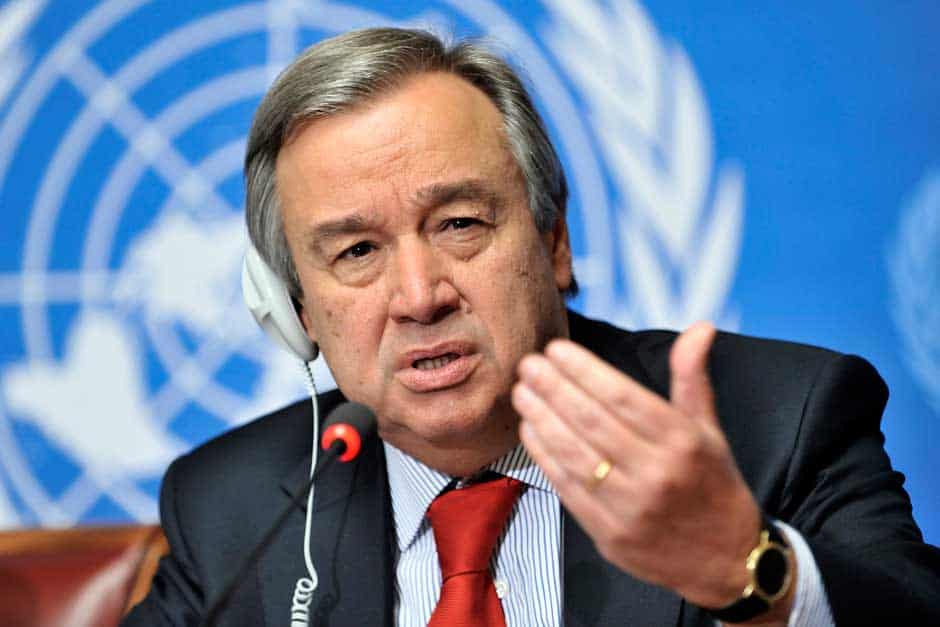 Avni: That’s great. You had a lunch with the new ambassador to the United Nations. I’m sure you heard, at Congress, especially after resolution 2334 passed in the security council many are calling to cut budgets for the UN if they don’t change their ways. They don’t know those distinctions you made but they say if they don’t change their ways then we’ll cut budgets to the UN. You saw stories, 40% and so on and so forth, do you think that is something that may happen?
SG: Look, my position is that I should do the right thing. And to do the right thing for the Secretary General of the United Nations is to be independent, impartial, and to treat everybody equally. And this is what I will do, whatever happens.
I am a strong believer that a constructive engagement with the American administration and with the American Congress can allow for the development of a positive relationship. And I will do my best to guarantee it, and I think that people have a much better knowledge of how the UN works than sometimes we think, so I am not pessimistic about this.
Avni: But that’s not the question, the question is that Congress is the one that allocates money in the US and…
SG: Yes, and I have been in dialogue with members of congress about this, and I am sure that that dialogue can lead to positive results.
Avni: But it’s not a secret that in the US there’s much more sensitivity to an impression of singling Israel out at the UN than there is in other countries in Europe, and places like that. So do you think that the UN needs to do something in order to change that impression, beyond your job but…?
SG: As I said, as Secretary-General it is my duty to be fully impartial. And I will do it, I will do my best also for the UN to work in a way in which all member states are treated equally, as I said. But of course, I don’t control member states, and this is also beyond the secretariat.
There is an intergovernmental dimension that is absolutely essential, the Security Council is the body that has a number of very important competences defined by the Charter, and the Charter needs to be respected.
I cannot, I cannot, go over the Charter. I am not the boss of the UN. I am the chief of the office of the UN and at the same time with the capacity to use my good offices in order to allow for this organization to be perceived as positively as possible by all member states.
Avni: What about Israel and Palestine, do you plan anything as the Secretary General to look at the process at all?
SG: I have no initiative planned. I am a strong believer in the two-state solution. In my past capacities I have followed very closely the conflict. I have many old relations with Israel. I was a good friend of people like Shimon Peres, Yitzchak Rabin and…
Avni: Ehud Barak, I saw a tweet the other day…
SG: Yeah, Barak, also a good friend. Of course when I started in the government it was with Shimon Peres and Yitzhak Rabin. I remember once during Sharon’s government that Shimon Peres and Arafat wanted to meet, but for any reason they couldn’t meet in New York.
And they came to meet secretly in my office in Lisbon. And I have always been totally at disposal of both Palestinians and Israelis without any agenda but to help for what I believe is necessary is that the two parties come together and find an agreement to have peace.
Avni: Should the Palestinians become a member state? Should Palestine become a member state of the United Nations? A full membership.
SG: That as you know depends on a full decision by the Security Council… [laughter] …and you know what’s to be expected of the Council in the present situation.
Avni: As the Secretary General, would you like to have Palestine as a full member?
SG: This is an area for Member States to decide. What I want is to have peace between Israel and Palestine.
Avni: Thank you very much for your time.
SG: Thank you very much.