Speaking on behalf of UN Watch, Venezuelan exile Eligio Cedeno, a former political prisoner and prominent businessman, delivered the following speech today before the U.N. Human Rights Council. UN Watch has launched an international campaign to stop Chavez from winning a seat on the council. 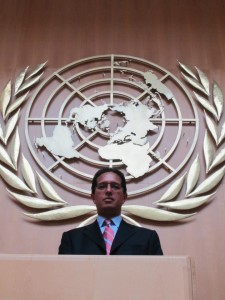 My name is Eligio Cedeño, and I come from Venezuela. Today I am a free person, but three years ago I was a political prisoner in Venezuela.

I was sent to jail because I provided financial support to Venezuela’s political opposition.

I was jailed for two years, ten months and three days — without a trial. Following a recommendation of this organization, the United Nations, I was freed by Venezuelan Judge Maria Lourdes Afiuni.

That same day she was arrested. And the next day, Venezuela’s president went on all television stations, calling her a “bandit.” He gave orders to the Attorney General and to the president of the supreme court to apply the maximum penalty of 30 years in prison. He also announced that in another era he would have had her shot.

Since then, Judge Afiuni has for two years and six months been in prison and under house arrest.

Venezuela is a nation with a profound human rights crisis: Judicial independence is non-existent, with judges publicly declaring loyalty oaths to the president and chanting his praises at the Supreme Court.

The consequences of a politicized judiciary are made much worse by the critical state of Venezuela’s prisons, which are among the most dangerous in the world.

When judging whether Venezuela should be a member of this council, I ask you to bear in mind a critical point. Venezuela attends trials and participates in international courts. They present evidence, defend themselves and fight. Yet when they receive a ruling that is unfavorable, they refuse to comply. This situation has occurred in several cases, including here at the United Nations.

It would be an act of immortality to allow Venezuela into this council, if they do not commit to change their behavior.

I am only one victim. Judge Afiuni is another. Let us not forget that millions of Venezuelans are targets of a government that does not respect the Universal Declaration of Human Rights.

It would be a disaster to include the state of Venezuela if it does not follow the rulings of this body.