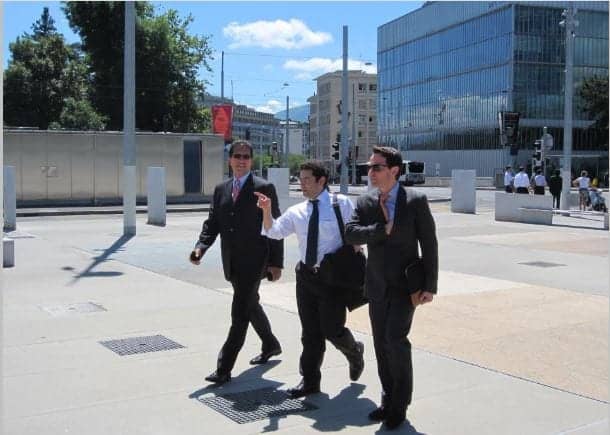 GENEVA, June 28 – The United Nations stopped all debate today at its top human rights body while the U.S. squared off against heated interruptions by a fist-banging Cuban delegate, supported by China, Russia and Pakistan, who were outraged over activists’ criticism of both their ally Hugo Chavez’s bid for a seat on the U.N. Human Rights Council and of the council membership of other “authoritarian” governments. (See video at mark 27:20.)

The banker and former political prisoner, who escaped the clutches of Hugo Chavez for asylum in the U.S., confronted his oppressor in a powerful plenary statement.

Exercising its right of reply, Venezuela’s representative called Cedeno a “terrorist and criminal who fled justice.” The Chavez diplomat falsely accused the U.S. of having invited Cedeno to the council, which he said was “to smear the reputation of my country.” He also accused UN Watch of being a U.S. “lackey.“ (See video at mark 1:55:30)

And in a concerted effort with UN Watch, Thor Halvorssen, the Venezuelan-born head of the Human Rights Foundation — whose mother was shot by Chavez forces — also took the floor to challenge Venezuela’s credentials, as well as those of existing members Cuba, China, Russia and Saudi Arabia.

Shouting repeatedly for the U.N. chair to stop the speech, the Cuban delegate flew into a range, his fists banging on the table, and knocking over his own chair.

Cuba said that non-governmental activists taking the floor at the U.N. “cannot question the hopes and aspirations of states to become members of the Human Rights Council, or their right to be members. You cannot say that my country does not have a right to be a member of this council.” Havana’s delegate demanded that Halvorssen’s statement be “struck from the record.”

Russia and Pakistan similarly claimed that Halvorssen spoke out of turn. China said that activists at the U.N. “are not entitled to challenge the right of a country to become a member of the council.”

However, UN Watch director Hillel Neuer said that a quick intervention by the U.S. apparently convinced the chair to let the statement stand.

“Today was a rare moment at the U.N.,” said Neuer. “We succededed in putting Chavez — who throws inpendent judges in jail and persecutes student activists — on the defensive.”

When Halvorssen referred to “authoritarian” regimes, Cuba interrupted again, calling it a “disrespectful term,” and asked the chair to prohibit him from speaking. China also objected, saying no one at the U.N. human rights council has a right “to label a sovereign state, to point a finger at a country that is a member, or which wishes to become a member.”