U.N. Targets Israel in 7 Resolutions, Rest of the World 0

NEW YORK, December 10, 2020 – The United Nations General Assembly today adopted seven resolutions that single out or condemn Israel, and zero on the entire rest of the world. See below for resolution texts and voting sheets.

The texts condemned Israel for “repressive measures” against Syrian citizens in the Golan Heights and renew the mandates of the corrupt UN Relief and Works Agency (UNRWA) as well as the UN’s “special committee to investigate Israeli practices affecting the human rights of the Palestinian people and other Arabs of the Occupied Territories.”

“Last month, the Hamas terrorist group assaulted Israeli civilians with rockets from Gaza while the UN’s General Assembly and Human Rights Council stayed silent. The world body now adds insult to injury by adopting seven lopsided condemnations, whose only purpose is to demonize the Jewish state.”

“While France, Sweden and other EU states are expected to support more than two thirds of of the resolutions to be adopted against Israel by the end of this month, the same European nations have failed to introduce a single UNGA resolution on the human rights situation in China, Venezuela, Saudi Arabia, Belarus, Cuba, Turkey, Pakistan, Vietnam, Algeria, or on 175 other countries,” said Neuer.

“Four of today’s resolutions concern UNRWA — yet none mentions that the agency chief was fired last year after top management engaged in what the UN’s own internal probe described as ‘sexual misconduct, nepotism, retaliation, discrimination and other abuses of authority, for personal gain.’ All EU states are complicit in this conspiracy of silence.”

“One of today’s resolutions—drafted and co-sponsored by Syria—falsely condemns Israel for ‘repressive measures’ against Syrian citizens in the Golan Heights. It’s obscene,” said Neuer.

The resolution condemns Israel for holding on to the Golan Heights, and effectively demands Israel hand the land and its people to Syria.

“It’s astonishing,” said Neuer. “After the Syrian regime has killed half a million of its own people, how can the UN call for more people to be handed over to Assad’s rule? The text is morally galling, and logically absurd.”

“Today’s resolutions claim to care about Palestinians, yet the UN is oblivious to more than 3,000 Palestinians who have been slaughtered, maimed and expelled by Assad’s forces.”

“Today’s farce at the General Assembly underscores a simple fact: the UN’s automatic majority has no interest in truly helping Palestinians, nor in protecting anyone’s human rights; the goal of these ritual, one-sided condemnations is to scapegoat Israel,” said Neuer.

For the first time ever, Germany, Austria and Bulgaria changed their votes and opposed the annual resolution that renews the mandate of the 25-nation “Committee on the Exercise of the Inalienable Rights of the Palestinian People,” one of the UN’s most notorious anti-Israel bodies. Likewise, Iceland and Uruguay moved from voting Yes last year to Abstain. Others who rightly opposed the resolution, as they did in 2019, include Australia, Brazil, Canada, Czech Republic, Colombia, Honduras, Hungary, and the United States.

Similarly, Switzerland and Slovenia for the first time ever voted No to the annual resolution that renews the mandate of the UN’s Division for Palestinian Rights, which employs 15 full-time staffers, at a cost to taxpayers of millions of dollars, to organize anti-Israel events worldwide. Regrettably, France did not oppose the resolution, and once again abstained. For a second year, UN Watch commends the Czech Republic, Germany, Netherlands, Denmark, Austria, Bulgaria, Estonia, Greece, Hungary, Lithuania, and Slovakia for last week breaking from EU consensus and voting to oppose the UN resolution funding the UN’s 15-member Palestine division. (Click here to see full voting sheets from last week.)

Last year, 155 German MPs called on the German government to “dissociate from unilateral, primarily politically motivated initiatives and alliances of anti-Israeli Member States, and protect Israel and legitimate Israeli interests from unilateral condemnation” in the UN.

In 2017, the Dutch parliament resolved to “actively oppose UN organizations that devote disproportionate attention to Israel.”

“Last week’s votes by the Czech Republic, Germany, the Netherlands, and others illustrates that pressure from lawmakers and regular citizens can change anti-Israel voting patterns. UN Watch will continue to rally the public to call for fairness and equal treatment of Israel in the UN. The EU and other democracies must stop supporting the disproportionate amount and biased nature of the resolutions targeting the Jewish state each year,” said Neuer.

In testimony delivered last week in the Israeli Knesset in Jerusalem, Neuer affirmed the importance of calling out the UN’s discriminatory treatment against Israel.

“The UN assault on Israel poisons the hearts and minds of hundreds of millions worldwide. It grants the imprimatur of international legitimacy that fuels the boycott movement. It sends a signal to Hamas and other terrorist groups that the world is with them,” said Neuer.

“We need to demand that democracies like the UK, France and Germany respect the UN’s founding principles—which they claim to believe in—by ending their support for the UN’s obsessive scapegoating of the world’s only Jewish state, and to instead work on protecting human rights for the victims who need it most.”

[No screenshot of vote]

Excerpt:“Expressing grave concern at the especially difficult situation of the Palestine refugees under occupation, including with regard to their safety, well-being and socioeconomic living conditions…”

Analysis: Resolution serves Arab states that seek to preserve Palestinians as pawns in political campaign to delegitimize Israel. Intent and effect of singling out Palestinian from all refugee claims in the world is to isolate and demonize Israel. Omits any reference to Lebanon’s discrimination against Palestinian refugees in that country or the Syrian Assad regime’s collective punishment of Palestinian refugees in that country and their treatment as second-class citizens. Redundant to three other resolutions adopted on same day (see in this post) dealing with refugees and UNRWA. 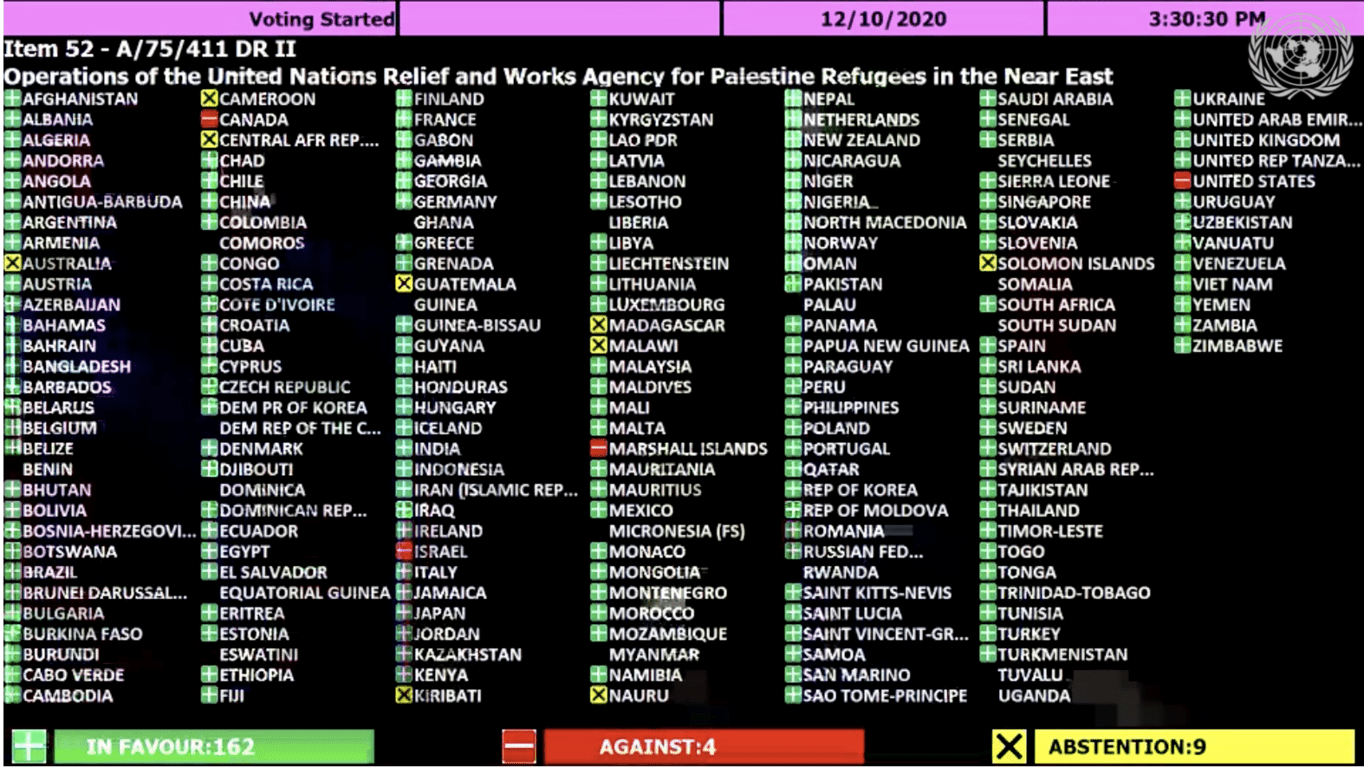 Excerpt:“Calling upon Israel to ensure the expedited and unimpeded import of all necessary construction materials into the Gaza Strip and to reduce the burdensome cost of importation of Agency supplies…”

Analysis: Perpetuates anomaly whereby Palestinians are the only people not served by UNHCR but instead by special agency. Resolution makes one-sided condemnations of Israeli actions, but silent on Palestinian terrorism against Israelis and abuses of Palestinian forces against their own citizens. Ignores UNRWA admission that members of Hamas, a terrorist organization, were on its payroll. Resolution calls on Israel to allow construction materials into the Gaza Strip yet fails to acknowledge Hamas use of such materials to build attack tunnels and other terror infrastructure. 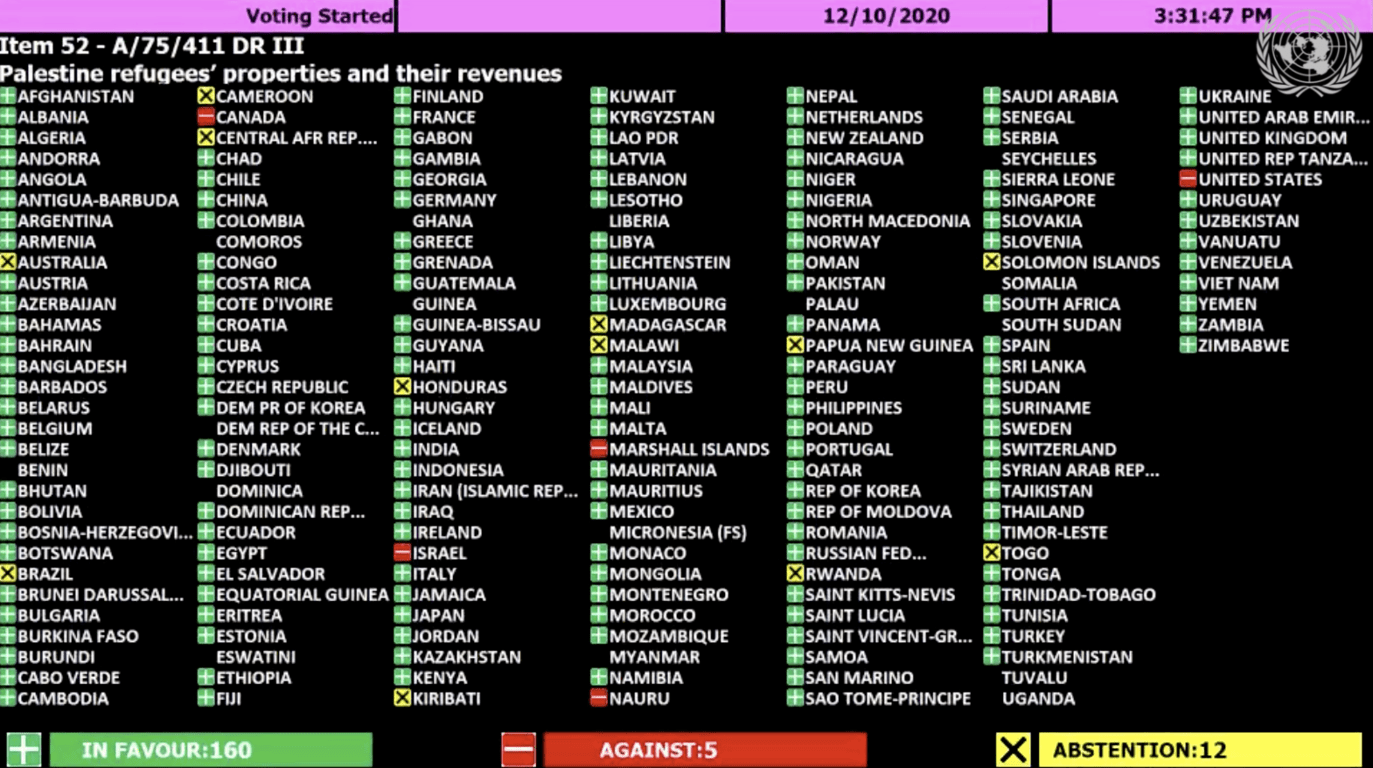 Excerpt:“Reaffirms that the Palestine refugees are entitled to their property and to the income derived therefrom, in conformity with the principles of equity and justice…”

4. “Work of the Special Committee to Investigate Israeli Practices Affecting the Human Rights of the Palestinian People and Other Arabs of the Occupied Territories” [A/C.4/75/L.12]: Adopted by a vote of 76 – 14 – 83 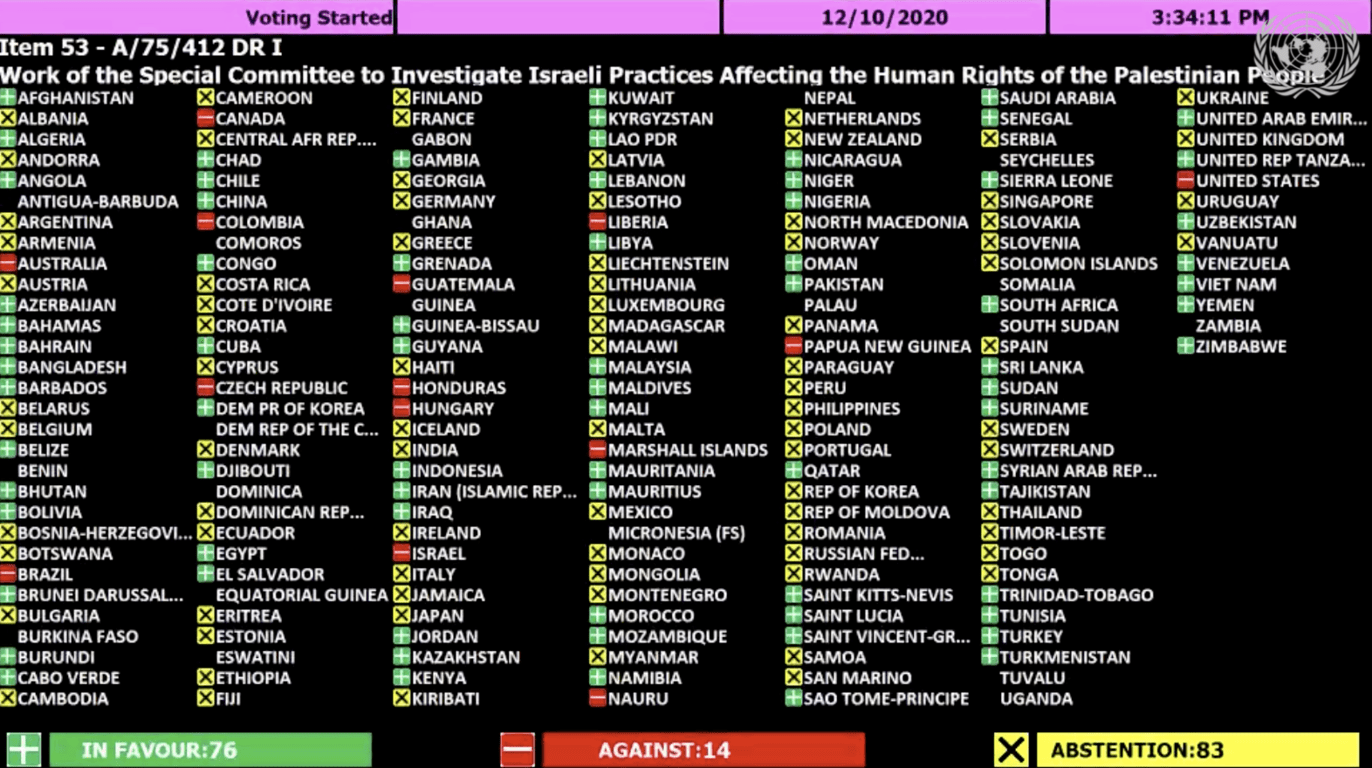 Excerpt:“Deplores those policies and practices of Israel that violate the human rights of the Palestinian people and other Arabs of the occupied territories, as reflected in the report of the Special Committee covering the reporting period…”

Analysis: Perpetuates committee with blatantly biased mandate of examining only Israeli actions, but ignoring Hamas, Islamic Jihad and Fatah terrorism. Contrary to international law and resolution 242, claims that occupation is itself a violation. Resolution falsely accuses Israel of indiscriminate force against civilians and provocations and incitements against “the holy places.” At the same time, it completely ignores Palestinian use of the Al Aqsa Mosque as a vehicle for antisemitic incitement, thereby also denying the Jewish connection to the Temple Mount. Furthermore, the one-sided accusation against Israel disregards Palestinian attacks against Jewish holy sites, such as Joseph’s Tomb in Nablus. 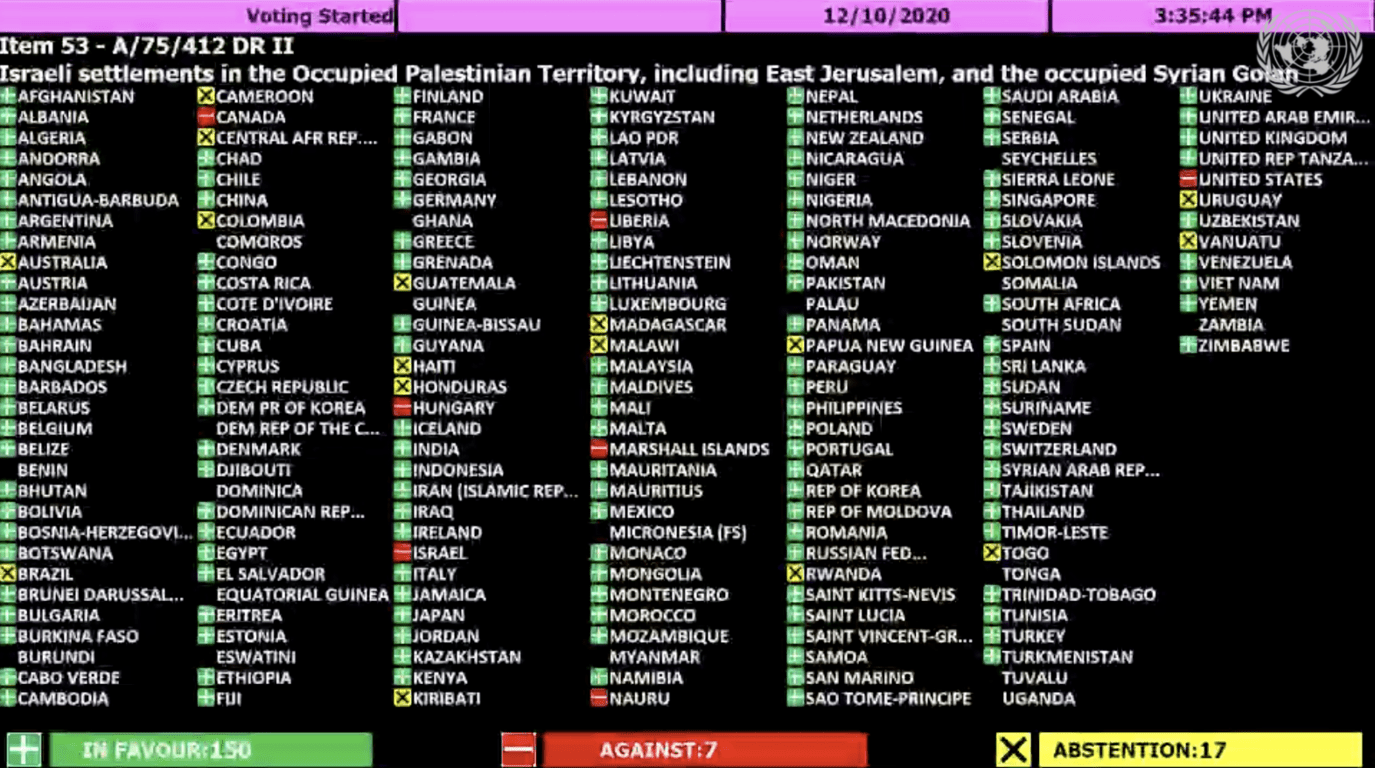 Excerpt:“Reaffirms that the Israeli settlements in the Occupied Palestinian Territory, including East Jerusalem, and in the occupied Syrian Golan are illegal and an obstacle to peace and economic and social development…”

Analysis: Adopts Palestinian position on issues that Oslo Accords left to negotiations, such as settlements and borders. Israel treated with disdain in comparison to praise and deference to governments shown by UN resolution on Myanmar. Makes sweeping legal pronouncements on disputed matters, for example by accusing Israel of violating international law for ordering demolitions of illegally built structures in territory over which it has administrative control. Makes an immoral equivalence between Palestinian terror and violence and Israeli countermeasures. Specifically condemns incitement by “Israeli settlers,” but fails to expressly condemn widespread, official terrorist and antisemitic incitement by Palestinian officials, media and education.

6. “Israeli practices affecting the human rights of the Palestinian people in the Occupied Palestinian Territory, including EastJerusalem” [A/C.4/75/L.14]: Adopted by a vote of 147 – 10 – 16 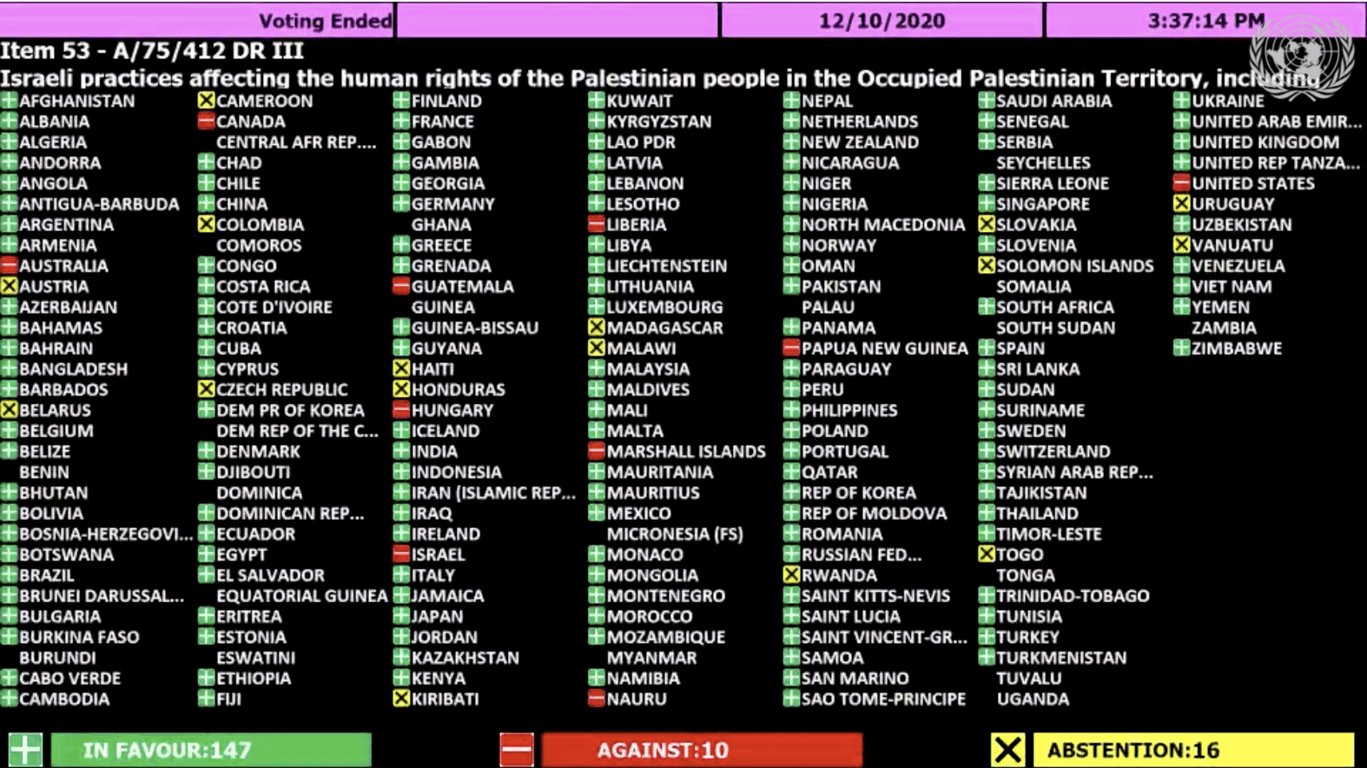 Excerpt:“Gravely concerned by the tensions and violence in the recent period throughout the Occupied Palestinian Territory, including East Jerusalem and including with regard to the holy places of Jerusalem, including the Haram al-Sharif, and deploring the loss of innocent civilian life…”

Analysis: Ignores terror attacks against Israeli civilians within Israel, referring to them only as “tensions and violence” in the “Occupied Palestinian Territory.” This negates the numerous deadly attacks that have occurred in Israeli cities. It also seeks to strip Israel of its inherent right to self-defense by classifying every defensive measure as a violation of international law. Additionally, it refers to the Temple Mount in Jerusalem only by its Islamic name, “Haram al-Sharif.” 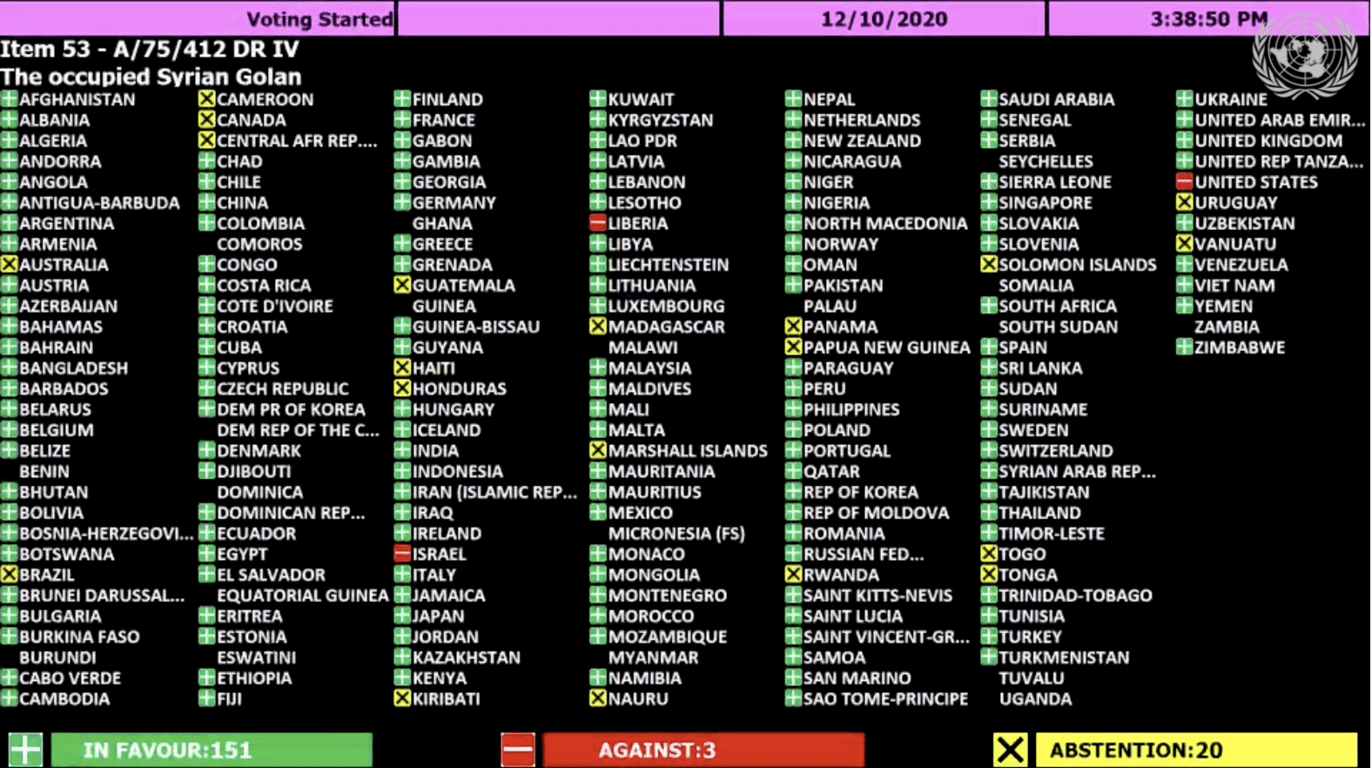 Excerpt:“Determines that all legislative and administrative measures and actions taken or to be taken by Israel, the occupying Power, that purport to alter the character and legal status of the occupied Syrian Golan are null and void…”

Analysis: Ignores the existence of the Syrian Civil War and its security implications for Israel and the civilians of the Golan Heights. Also ignores Syria’s history of shelling Israeli communities, its leader’s calls for a “war of annihilation” against Israel, and Syria’s 1967 aggression that led to its loss of the territory. Also neglects Syria’s sponsorship of the enemies of the peace process, and its support for terrorism. Falsely claims that Israel is oppressing and imposing Israeli citizenship on the Arab population of the Golan Heights.