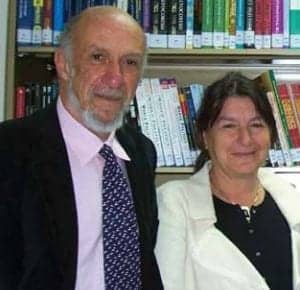 GENEVA, May 8, 2014 —  UN Watch condemned the UN’s “bizarre, nepotistic, and politically-driven” decision today to hand a top human rights post to the controversial wife and academic partner of discredited official Richard Falk, on the same day that he ended his own 6-year term as UN investigator of Israeli violations.

Despite submitting an application form riddled with self-disqualifying answers, non-sequiturs, and more than 20 spelling mistakes, Hilal Elver (also known as Hilal Elver Falk) was named UN special rapporteur on the right to food, a position initiated by Cuba and first held by Jean Ziegler, founder and recipient of the Muammar Qaddafi Human Rights Prize.

“Decisions like this threaten to turn the UN into a joke,” said UN Watch executive director Hillel Neuer.

“Falk was an open admirer of 9/11 conspiracy theorists and an apologist for terror groups whose term was finally up, so now the UN installed his closest professional collaborator — his wife.”

Elver and her husband Falk teach, lecture and publish together. They also co-direct a research institute.

Falk was condemned repeatedly during his term by UN Secretary-General Ban Ki-moon, the U.S., Britain and Canada for promoting 9/11 conspiracy theories and endorsing an anti-Semitic book.

At the same time, UN Watch welcomed the strong objections expressed by the U.S. and Canada, which followed a month-long protest campaign by the the Geneva human rights group.

“The United States again expresses its concern,” said the U.S. in a statement today, citing Elver’s “lack of relevant experience” and questioning “her readiness for this assignment.”

In addition, the U.S. pointed to Elver’s “biased and inflammatory views” regarding the United States and Israel, which it said “run counter to the dispassionate professionalism central to the work of a Special Rapporteur.”

The U.S. said the appointment “could reflect negatively on the Council’s other special procedures mandates, most of which produce crucial work that highlights, promotes, and protects human rights around the world.”

“Her public record clearly demonstrates abysmal judgment, as well as associations with fringe groups,” Canadian Foreign Minister John Baird said in a letter sent to Baudelaire Ndong Ella, a diplomat from the African country of Gabon and current UNHRC president.

Elver is one of 19 academics and former diplomats named today as independent experts of the 47-nation UN Human Rights Council.

“Apart from Elver, many excellent people were chosen today, and we look forward to working with them to advance human rights for victims worldwide,” said UN Watch executive director Hillel Neuer.

“It is truly a shame that many of the independent experts who are the crown jewels of the UN human rights system should have their work tarnished by indefensible UN appointments driven purely by politics and anti-Western and anti-Israel ideological agendas.”

UN Watch had sent a letter, objecting to Elver’s failure to satisfy the UN post’s official criteria, to the U.S., Austria, the Czech Republic, Estonia, France, Germany, Ireland, Italy, Japan, Romania and the UK, all of whom are voting members on the UNHRC, and to Canada, an observer.

Elver has joined her husband on numerous occasions in supporting the work of 9/11 conspiracy theorists, and in accusing the West and Israel of Islamophobia and “genocide.”

“Hilal Elver is not only Richard Falk’s wife, employee and main collaborator, but she echoes his crude and simplistic post-colonial narrative, which demonizes America, the West, and Israel, while praising dictators like Erdogan and the books of 9/11 conspiracy theorists,” said Neuer.

In an upset for LSE professor Christine Chinkin, co-author of the UN’s Goldstone Report, the council dropped her name as Falk’s intended replacement, instead naming former Indonesian diplomat Makarim Wibisono to the post.

This is second time that Chinkin applied yet failed to get the post. In 2006, she was defeated by Falk.

“While UN Watch was the first to express concerns over several of his past UN statements made on behalf of Indonesia,” said Neuer, “I met and interacted with Ambassador Wibisono in 2005 when he was Chair of the former UN Commission on Human Rights, a position that he fulfilled with fairness and professionalism.”

“Despite the bias inherent in this one-sided UN mandate, which only examines Israel and presumes guilt in advance, I hope that Ambassador Wibisono will turn a new page for the UN position.”

“Falk’s 6-year tenure was marked by baseless and inflammatory condemnations of Israel that only caused polarization, threatening to push the parties apart.”

“We need someone now who will respect universal standards, genuinely protect the human rights of all citizens, and uphold the UN’s purpose of bringing people together.”