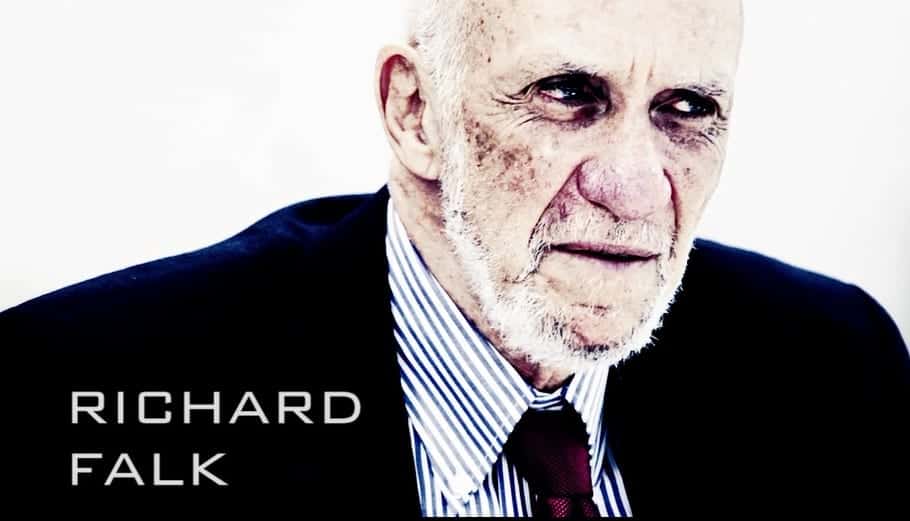 GENEVA, March 19, 2017 — The Geneva-based human rights organization UN Watch, which is accredited by the United Nations as a non-governmental organization in special consultative status with a mandate to monitor the world body’s adherence to the principles of its Charter, today sent the following letter to UK Prime Minister Theresa May, urging her government to consider expelling disgraced ex-UN official Richard Falk, whom it has officially condemned three times for antisemitism.

March 19, 2017
Dear Prime Minister May,
In a recent speech, you said, “I made sure we kept extremism—including the sort that peddles anti-Semitic vitriol—out of our country,” and you cited your barring of antisemites like Dieudonné, and your expulsion of terror supporters like Abu Hamza and Abu Qatada.
In that regard, we wish to inform you that Mr. Richard Falk—a disgraced ex-UN official who was officially denounced by the United Kingdom on at least three separate occasions for antisemitism, and whose glorification of the Hamas terrorist group was so severe that the Palestinian Authority sought to expel him from the UN—is currently in your country, and is planning to speak this week at various events in London.
We urge your government to examine the following facts and legal precedents, and to consider whether to expel this exponent of antisemitism and glorifier of Jihadist terrorism from the UK.
(a) UK Condemnations of Richard Falk for Racism
1. Diplomatic practice for the UK and European Union member states is to avoid publicly criticizing United Nations human rights experts. That Mr. Falk is the only UN expert in history to have been condemned for racism by Britain, or any other member state of the European Union, speaks volumes.
2. In 2011, British Prime Minister David Cameron “strongly condemned” Mr. Falk’s publication of an antisemitic cartoon. The image posted by Mr. Falk on his blog showed a dog wearing a Jewish head-covering urinating on a depiction of justice, and devouring a bloody skeleton. Falk was also condemned for this racist act by British MPs David Burrowes and Theresa Villiers.
3. In 2012, the British Foreign Office condemned Mr. Falk for providing the cover endorsement of a virulently antisemitic book that describes Jews as Nazis, and which asks whether “Hitler might have been right after all.” The UK Mission in Geneva protested in a demarche to the UN human rights office, expressing London’s “serious concerns.” The book endorsed by Mr. Falk, “The Wandering Who,” accuses “the Jews” of being “the only people who managed to maintain and sustain a racially orientated, expansionist and genocidal national identity that is not at all different from Nazi ethnic ideology.”
4. Notably, this antisemitic book publicly endorsed by Mr. Falk was denounced by even the most ardent anti-Israel activists in the UK, condemned as racist, for example, by Electronic Intifada founder Ali Abunimah. Likewise, Tony Greenstein, a member of the English group “Jews for Boycotting Israeli Goods,” rebuked Mr. Falk for having endorsed the antisemitic book as a “transformative” work.
5. In April 2013, the UK Mission to the United Nations condemned Mr. Falk’s comments which blamed the Boston terrorist attack on “the American global domination project” and “Tel Aviv.” The UK Mission determined that Mr. Falk’s remarks were “antisemitic.” Indeed, the UK Mission highlighted that this was “the third time we have had cause to express our concerns about Mr Falk’s antisemitic remarks.” Mr. Falk was also denounced at the time by the Secretary-General of the United Nations and other world leaders.
6. The above UK condemnation of Mr. Falk was reconfirmed two months later, in June 2013, by Ms. Philippa Thompson, Deputy Team Leader of the Equality and Non-Discrimination Team within the Human Rights & Democracy Department of the UK Foreign and Commonwealth Office.
7. The Foreign Office’s UK Non-Discrimination Team determined that Mr. Falk’s writings were “resonant of the longstanding antisemitic practice of blaming Jews (through the State of Israel by proxy) for all that is wrong in the world.”
8. Mr. Falk’s blog is replete with additional crude antisemitic comments by contributors whom he defends and praises, racist material fostering hatred which has he has refused to remove. For example:

(b) Palestinians Sought to Expel Falk Over Hamas Support & Holocaust Statements
9. Mr. Falk and his supporters seek to cast all of his critics as exclusively Israel supporters. The facts show otherwise. As revealed in a Wikileaks cable dated February 16, 2010, the Palestinian Authority sought to expel Falk from the UN, on grounds, as he admitted himself that he is a “partisan of Hamas.” The Palestinians also objected to Falk’s controversial comments about the Holocaust.
10. Mr. Falk has additionally been denounced by former United Nations Secretary-General Ban Ki-moon, the Canadian government, former U.S. Ambassador Susan Rice, anti-racist organizations, and members of parliament from around the world. (See enclosed summary in our 2013 draft resolution, circulated as United Nations document A/HRC/23/NGO/27.)
(c) UK Law and Precedent Justify Expelling Richard Falk for Racism
11. On the basis of UK law and precedent, and based on Mr. Falk’s actions which prompted the UK government to publicly condemn him for racism and antisemitism on three separate occasions, he should be expelled from the UK.
12. As you know, the Home Secretary has the power to exclude an individual “if she considers that his or her presence in the UK is not conducive to the public good or if their exclusion is justified on public policy grounds.” The Home Office has noted that “[c]oming to the UK is a privilege, and we expect those who come here to respect our shared values.”
13. Because the UK has publicly and repeatedly condemned Mr. Falk for fostering antisemitism, it is indisputable that his presence in the UK is not conducive to the public good; that he does not respect your shared values of opposing antisemitism; and that, accordingly, Mr. Falk does not merit the privilege of visiting the UK.
14. In the past, the UK has barred or expelled numerous individuals for actions that never even rose to the level of having prompted multiple, prior British government condemnations for racism. For example, in 2015, in your former position as Home Secretary, you barred U.S. rapper Tyler the Creator from entry because he brought himself “within the scope of the list of unacceptable behaviour by making statements that may foster hatred, which might lead to intercommunity violence in the UK.” Likewise, Mr. Falk’s repeated verbal attacks on the collective Jewish people, as documented above, may foster hatred which might lead to inter-community violence in the UK.
15. As you noted in your December speech, you have barred several individuals on grounds of “Islamophobia.” In 2011, the UK barred U.S. Pastor Terry Jones. The Home Office explained that the UK “opposes extremism in all its forms which is why we have excluded Pastor Terry Jones from the UK. Numerous comments made by Pastor Jones are evidence of his unacceptable behaviour.” Likewise, Mr. Falk’s extremism and racism have been denounced by the UK, the UN Secretary General and world leaders, and constitute evidence of his unacceptable behavior.
16. Others barred from the UK on similar grounds include U.S. radio host Michael Savage; Fred Phelps and his daughter Shirley Phelps-Roper of the Westboro Baptist Church; preacher and Hamas MP Yunis Al Astal; Stephen Donald Black of the Ku Klux Klan. Like journalists or religious preachers, academics or supposed human rights experts such as Mr. Falk do not enjoy immunity for their racist incitement or for their glorification of terrorist violence by Hamas and other groups.
For all of these reasons, we urge you to consider expelling Mr. Falk from the United Kingdom forthwith.
Sincerely,
Hillel C. Neuer
Executive Director
United Nations Watch
Geneva, Switzerland