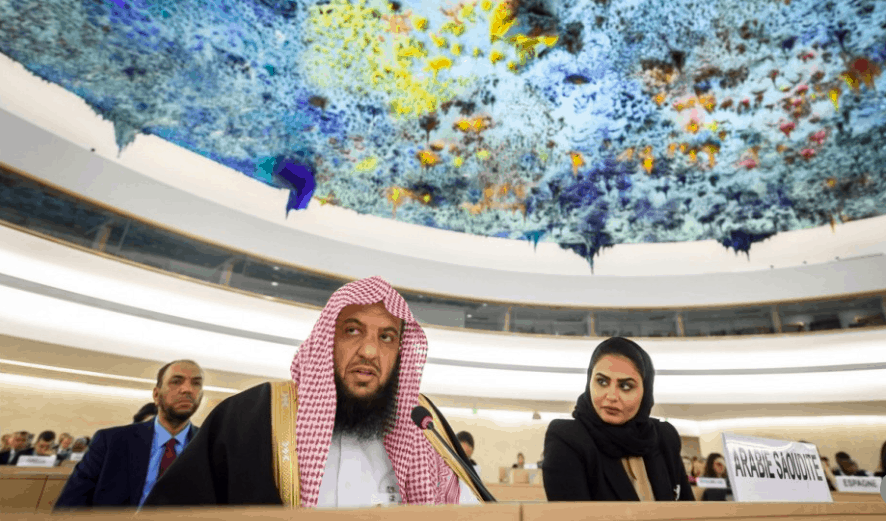 “Sadly, 75 out of 96 country delegations who took the floor at the UN Human Rights Council today expressed praise for the brutal and misogynistic Saudi regime,” said Hillel Neuer, executive director of the Geneva-based UN Watch, a non-governmental monitoring group.

“It’s a betrayal of jailed Saudi human rights activists like pro-democracy blogger Raif Badawi, who has been wrongfully imprisoned since June 2012. Despite our appeals to Canada, and to Germany, Britain, Sweden, France and others, no one spoke up for Raif Badawi.”

Despite today’s mandatory review of Saudi Arabia, in a standard exercise that all countries undergo every five years, the 47-nation UNHRC has never produced a single resolution, special session or commission of inquiry to condemn Saudi Arabia’s human rights record — not even for their confessed killing of journalist Jamal Khashoggi.

“On the contrary,” said Neuer, “Saudi Arabia is an elected member of the UN Human Rights Council.”

In today’s meeting, China praised Saudi Arabia for “its adoption and implementation of the Saudi Vision 2030,” for its “efforts in the area of economic, social development and poverty elimination” and its “judicial reform and fight against corruption.”

And in exchange, said Neuer, “tomorrow when China has its own turn to be examined, I predict that Saudi Arabia will take the floor to hail Beijing’s human rights record.”

Yemen applauded Saudi “support provided all levels to the people of Yemen.” Bahrain hailed Saudi Arabia’s “positive steps to protect human rights.” Jordan said that “the Saudi government has made human rights one of its main priorities.”

Neuer called the exercise of dictatorships falsely praising each other a “mutual praise society.”

“What we witnessed today was the spectacle of anti-democratic regimes like China, Venezuela and Myanmar falsely lauding Saudi Arabia for human rights successes, knowing that the Saudi regime will happily return the favor when their own records are under scrutiny,” Neuer said.

“A country with deeply-rooted discrimination against women in all sectors of society should not be praised in a UN human rights review, let alone sit on three separate UN bodies that are meant to protect women’s rights,” said Neuer.