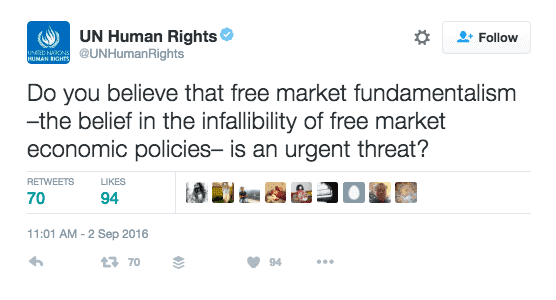 Above: tweet deleted by the UN under criticism from watchdog group

GENEVA, Sept. 5, 2016 — The UN human rights office deleted a bizarre statement on Twitter, published on its account with 1.5 million followers, in which it slammed “free market fundamentalism” as an “urgent threat,” after the head of a watchdog group questioned the tweet.

Though the UN tweet from Friday had garnered more than 160 retweets and likes, the world body removed it under criticism from Hillel Neuer, executive director of the Geneva-based UN Watch.

“This was a loony tweet, and it calls into question the judgment of the UN’s top human rights office,” said Neuer. “While millions of people are suffering from genocide, sexual slavery and starvation, it is far from clear why the UN would instead focus its attention on unidentifiable ‘urgent threats,’ let alone on economic subjects about which it has neither competence nor expertise,” said Neuer.

“Tellingly, the same UN human rights office has failed to issue a single tweet about this past month’s dire human rights crisis in Venezuela, where millions face mass hunger in part due to attacks on the free market in the failed economic policies of the late president Hugo Chavez and his successor Nicolas Maduro, which included arbitrary seizure of businesses and private property.”

“If the UN did not have a strict policy of ignoring its own guaranteed human right to private property, established in Article 17 of the Universal Declaration of Human Rights, then perhaps Venezuelan mothers would not be struggling to find food for their children.”

“Virulent anti-capitalism was a policy of the defunct Soviet Union, but it should not be embraced by the UN body which is supposed to be focused on human rights emergencies.”

The critiques that prompted the UN to delete its tweet:

Latest tweet from UN human rights office looks like it was written by a teenaged twit in a Che Guevara T-thirt: https://t.co/nAm5rxi0Gk

UN human rights office is a pyromaniac in a field of straw men—and ignores its own Art. 17 right to private property https://t.co/nAm5rxi0Gk