London’s Daily Telegraph is now reporting how the U.N. was forced to delete a bizarre tweet under criticism from UN Watch. 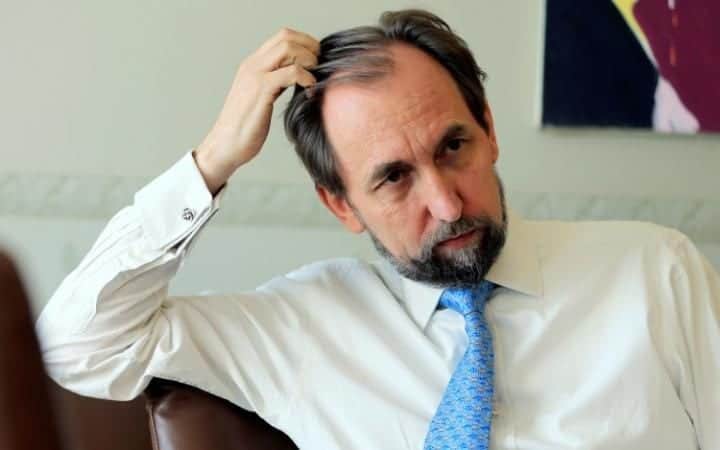 The United Nations human rights office has been accused of “bizarre” behaviour after deleting a “loony tweet” asking whether free market economics posed an “urgent threat”.

The row came as Zeid Ra’ad al-Hussein, the UN High Commissioner for Human Rights, launched a ferocious verbal attack on right-wing “demagogues” in Europe and the US, accusing Donald Trump and Nigel Farage of sharing ISIS tactics.

Before Mr Hussein delivered this impassioned speech, his office in Geneva had sent a tweet to 1.5 million followers asking if “belief in the infallibility of free market economic policies” amounted to an “urgent threat”. 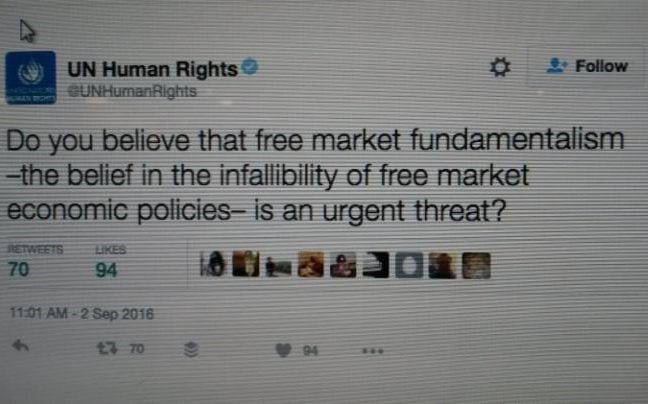 This tweet from the UN Human Rights Office in Geneva – later deleted – was widely condemned.

Hillel Neuer, the head of UN Watch, a campaign group, called this a “loony tweet”, adding: “While millions of people are suffering from genocide, sexual slavery and starvation, it is far from clear why the UN would instead focus its attention on unidentifiable ‘urgent threats’, let alone on economic subjects about which it has neither competence nor expertise.”

Mr Neuer pointed out that socialist economics had brought misery to Venezuela without drawing similar criticism from the UN. “The same UN human rights office has failed to issue a single tweet about this past month’s dire human rights crisis in Venezuela, where millions face mass hunger in part due to attacks on the free market,” he said.

During a speech in The Hague, Mr Hussein chose to direct his fire at Western populists, singling out Geert Wilders, the leader of the Party for Freedom in the Netherlands, Marine Le Pen, the head of the National Front in France – along with Mr. Trump and Mr. Farage.

All were “demagogues and political fantasists”, said Mr Hussein, who shared the “tactics” of the Islamic State of Iraq and the Levant (Isil). “To them, I must be a sort of nightmare,” he added. “I am a Muslim who is, confusingly to racists, also white-skinned; whose mother is European and father, Arab. And I am angry, too.”