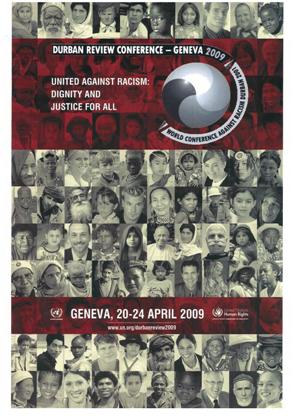 The UN today launched its new website on the Durban Review Conference (“Durban II”), in a festive atmosphere, with sandwiches and drinks, following a meeting of the Libyan-chaired Bureau, which oversees planning for the April conference. It was attended mostly by government representatives with few NGOs present.

The meeting was chaired by Ibrahim Salama, who now heads the Human Rights Treaties branch of the OHCHR, and is the official who lead the efforts of the UN Secretariat on Durban II. Mr. Salama was ambassador of Egypt to Portugal, member of the UN Sub-Commission for Human Rights, chair of the Working Group on the Rights to Development and African coordinator at Durban I. (for a more detailed background:  http://www.faithinhumanrights.org/read/36/dr_ibrahim_salama)

Mr. Salama delivered a broad overview of the efforts of the Secretariat so far on Durban II issues:

On public information, Mr. Salama presented the following activities: a new website launched on that day (available at www.un.org/durbanreview2009, to be also available for Durban II follow-up purposes), a newsletter distributed to all those present, an electronic bulletin and a poster (see above). With all these initiatives, Mr. Salama argued that “only facts can defeat fears.” Another colleague presented the different features of the website, which is directed to a “very broad audience.”

Russia commented that they were happy to see the results of their ($600,000) contribution. Senegal asked whether any outreach to the private sector or political bodies was envisioned.

Mr. Salama thanked Russia for their financial contribution and commented “This was the good news; the bad news is about the financial situation.” He went on to explain the finances of Durban II. He said that the OHCHR is “extremely committed” to the conference and it is a priority. The problem is the lack of funds. The initial cost estimate was $740,000. The OHCHR has been requested to absorb it from its regular budget. This amount covers the April 20-24 conference itself (conference services, translation, rooms, etc). But, he argued, there are many more costs not included: information, outreach, empowerment and participation of NGOs, website, support for LDCs (Least Developed Countries). If the states ask the OHCHR to “convince, outreach, empower”, then they need to provide extra-budgetary resources.

The amount left over from Durban I, together with the voluntary contributions, so far amounts to $1.4 million, with about half from each source. They have already spent $500,000 for staffing and missions. This bring the total cost to $1.9 million, which means that they have a deficit of $1 million. Mr. Salama asked for more contributions and made the following points: (i) they are doing their best with limited resources, (ii) this deficit will have a negative effect on other activities of the OHCHR, (iii) more demands by states in resolutions will lead to less optimal results overall.

Answering a question by UN Watch, Mr. Salama provided a breakdown of the voluntary contributions so far:

On the issue of the contribution by High Commissioner Navi Pillay to Durban II, Mr. Salama said that the OHCHR was working on that report. They have established a cross-desk task force. Mr. Salama will be meeting with regional coordinators on their expectations. The High Commissioner has her views but wants to hear from others what they think. He invited all parties to contact him if interested.

As far as activities are concerned, Mr. Salama informed us that the OHCHR is in touch with other UN agencies and they work together on issues such as health, development, migration, children, all related to the fight against racism.

NGO Forum Not Ruled Out

Last, on NGO participation, Mr. Salama explained the different ways NGOs can be engaged: (a) OHCHR support through travel subsidies, (b) information/outreach (c) participation with side events and within the conference, and (d) informal contact and lobbying delegates. NGO participation is important because they represent the voices of the victims and can bring a meaningful contribution.

The desired parameters for the side-events are: (a) to promote a victim’s perspective, from grass-roots organizations, offer substance for the final outcome and have north/south balance; (b) events within the scope of the DDPA; (c) focus on implementation.

Ms. June Ray, head of the OHCHR Civil Society Unit, added that there is an OHCHR advisory unit, under the direction of the Deputy High Commissioner. They have drafted guidelines for NGO funding and have formed a committee to review applications. They have already supported NGOs to the regional meetings in Abuja and Brazilia and they have received more than 200 applications for support for April. They want to ensure geographical balance, victim group representation and a transparent process. They are open to meet and brief NGOs and they also want to hear about NGO plans.

At the discussion that followed, Mr. Jan Lonn (a leader of the far-left/anti-Israel coalition planning an “NGO Forum”) deplored the late launch of the outreach campaign and stressed the need to “respond to the negation from some corners.” They want to have a civil society forum, which is an important part in NGO mobilization. There is strong support for it from all the regions, but they have problems of logistics and finance.

Mr. Salama said that their optimal objective is participation. They are sympathetic to the complaint about the lack of time. He concluded by saying “any proposal will be considered.”