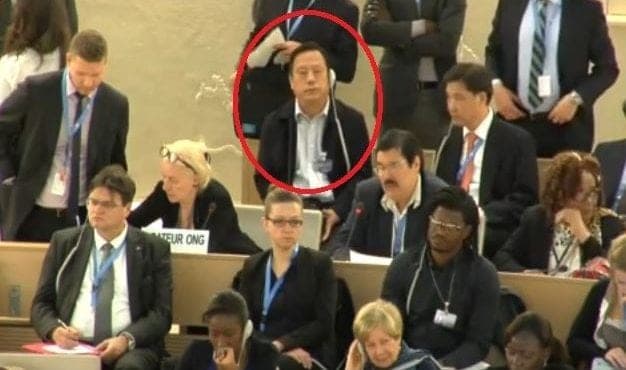 Above in red: the Chinese agent caught spying on a Canadian activist

GENEVA, March 20, 2014 – Security officers inside the UN human rights council yesterday caught a Chinese agent surreptitiously taking photographs of a Canadian rights activist and her computer screen, one day after she testified of her dissident father’s plight in a Chinese prison, according to a complaint submitted to the world body today by UN Watch, the Geneva-based human rights group that hosted her.
On Tuesday, Ti-Anna Wang, 24, had addressed the council concerning her father, democracy leader Wang Bing Zhang, serving a life sentence since 2002.
On Wednesday, moments before the council was scheduled to hold a tense, quadrennial session on China’s human rights record, UN officers removed a middle-aged man — bearing a NGO observer badge from the “China Association for Preservation and Development of Tibetan Culture,” a thinly-veiled front group for the Chinese government according to UN Watch —  from the council chamber.
Searching his hand-held tablet, the officers found photographs taken inside the UN plenary of Ms. Wang, her computer screen and personal belongings.
The UN ordered the Chinese operative to delete the pictures, but then allowed him to return to the chamber, where he joined a larger group of Chinese confederates that UN Watch described as belonging to Chinese “GONGOs” — government-operated front groups that acquire NGO badges in order to subvert civil society.
In his letter, which has been shared with country delegates, UN Watch executive director Hillel Neuer urged council president Baudelaire Ndong Ella to seek the removal of the offending organization’s credentials, to rebuke China, and to report the incident to Secretary General Ban Ki-moon as an incident of prohibited reprisal against a human rights defender.
The UN has already corroborated the above information, based on their own security officers’ report, to inquiring media.
_______________
Below is the UN Watch complaint letter submitted today to the UNHRC.

We wish to draw your urgent attention to a grave incident that took place yesterday, 19 March 2014, in the chamber of the Human Rights Council, between 5:00 and 6:00 pm, just prior to when the China UPR was supposed to begin.

An individual wearing a NGO badge from the “China Association for Preservation and Development of Tibetan Culture,” apparently acting in concert with others with him inside the chamber, engaged in acts of apparent intimidation and espionage by surreptitiously taking photographs of one of our delegates, Ms. Ti-Anna Wang, as well as of her computer screen and her belongings.

As you know, earlier this week Ms. Wang had testified before the Council, under Agenda Item 4, concerning the situation of human rights in China and the specific case of her father, Dr. Wang Bing Zhang, who has been a political prisoner in China for the past 12 years. She also met with representatives of the Office of the High Commissioner and the Special Procedures.

We commend the UN Secretariat for acting with alacrity to notify UN Security, who in turn promptly escorted the individual outside the chamber, discovered the photographs described above, and required him to delete them. We understand that Security has filed a report that will corroborate all of the above.

The Chinese NGO in question is known for making statements at the UN identical to those of the Chinese government. We consider this incident to be an act of deliberate intimidation in reprisal against our delegate for her cooperation with the United Nations human rights mechanisms.

We urge you to lead the HRC Bureau in condemning the so-called NGO and its delegate for their deplorable acts; to remove them from the speaker’s list of today’s UPR on China; to notify ECOSOC to remove their credentials; to formally complain to the concerned UN member state; and to report the incident to the Secretary General, the High Commissioner and all other relevant UN mechanisms dealing with reprisals against human rights defenders.

Thank you for your attention to this grave matter.