The UN Committee Against Torture ended its first-ever review of the Palestinians by praising them “for supporting female victims of violence.” Its final conclusions were published today, but these omitted mention of routine torture perpetrated against members of the Palestinian LGBT community or Palestinians who sell land to Jews.

Given recent high-profile reports and legal cases in which the Palestinian Authority and Hamas have been accused of severely torturing and mistreating detainees, one would have expected the UN panel to be tougher on the Palestinian delegation, as it has been on  Israel and the United States, for example.

The Committee Against Torture consists of ten independent experts tasked with monitoring state compliance with the Convention Against Torture and holding states accountable for violations. State parties are reviewed approximately once every four years. This was the first review of the Palestinians who joined the Convention in 2014 after gaining non-member observer state status at the UN.

The Palestinians spent about 20% of their report to the UN Panel shirking their own obligations and pointing the finger at Israel, as the “occupying power,” even though Israel’s compliance was not at issue as it undergoes its own review by the Committee. 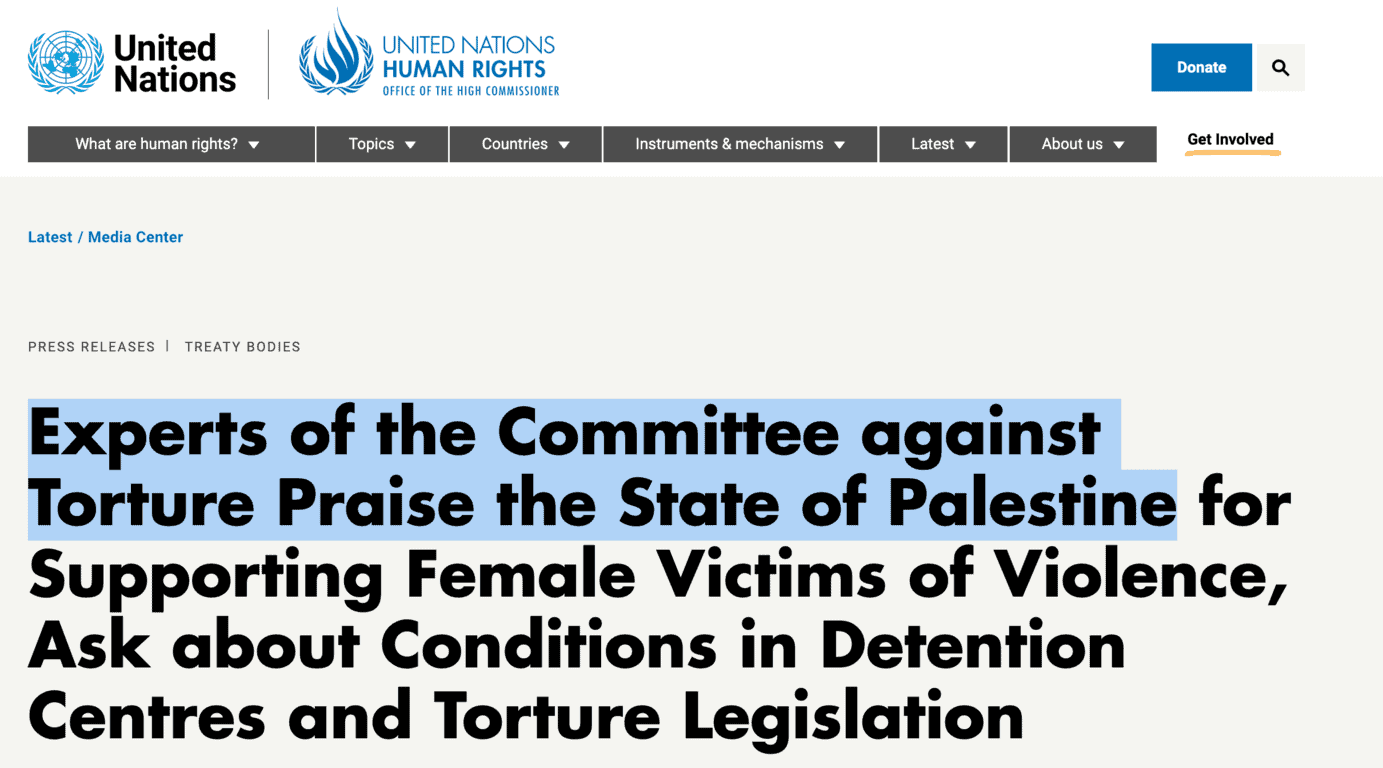 In his opening remarks, Committee Rapporteur Sébastien Touze of France acknowledged that “the Israeli occupation since 1967 makes it difficult to fully discharge the convention.” Mr. Touze also praised the “high quality” of the Palestinian report and explained that the review as not meant to be “punitive.”

Mr. Touze continued this friendly tone when he questioned the delegation about serious allegations in NGO reports, adding “the Committee is not here to corroborate or validate allegations, but to hear the version of the State party.” In the Concluding Observations, the Committee included a paragraph concurring with the Palestinian position that the Israeli occupation impedes Palestinian compliance.

Eleven NGOs submitted written reports to the Panel on a wide range of issues. Disappointingly, the expert panel did not address many of the points raised by the NGOs.

The panel asked no questions about violence against the LGBT community despite the fact that studies have found the West Bank and Gaza to be among the most dangerous places in the world for members of the LGBT community, and many Palestinian homosexuals end up fleeing to Israel.

While the panel did question the delegation about the death penalty, receiving assurances that it is not implemented, the panel did not ask about summary executions, a serious violation committed by both the Palestinian Authority and Hamas.

In addition, the Committee was completely silent about Hamas’s prolonged incommunicado detention of mentally ill Israelis Avera Mengitsu and Hisham Al Sayed and of its illegal withholding the bodies of two Israeli soldiers Hadar Goldin and Oron Shaul killed in 2014. These are blatant long-standing violations of the Convention that should be addressed by anyone seeking to hold the Palestinian account.

The Committee likewise was silent about torture and executions of so-called “collaborators” and Palestinians who sell land to Jews, although it did criticize killings of collaborators by Hamas and other terror groups (not the PA) in its concluding observations.

It also did not ask any questions about attacks on Israelis which are incited by Palestinian officials and Palestinian laws rewarding terrorism, even though the Committee has addressed these types of violations for other countries.