Since 1977, the UN’s “International Day of Solidarity with the Palestinian People,” held on or around November 29, has provided an annual opportunity for the PLO and its supporters to target Israel.

This year, however, due to the coronavirus pandemic, the propaganda is spreading far beyond the confines of the UN’s New York headquarters with the launch of a virtual exhibit that relies on inflammatory and misleading imagery, takes source material from an antisemitic website, and uses distorted and de-contextualized quotes.

The UN exhibit “examines the plight of the Palestinian people” by “focusing on the wall built in the Occupied Palestinian Territory,” which it explores through the words of “advocates and public personalities,” and through images from “artists and human rights activists who have used the wall as a canvas to express their solidarity with the Palestinian people.”

What the UN-hosted exhibit does not say is that over 90 percent of Israel’s security barrier, which it misleadingly refers to as “the wall,” is made up of an electronic fence. Only 10 percent of the barrier is a concrete structure, mainly limited to highly populated urban areas such as Jerusalem, Bethlehem, Qalqiliyah and Tulkarm.

What the exhibit fails to mention are the reasons why the barrier was constructed: no mention of the Palestinian terrorism that claimed over a thousand Israeli lives, and injured thousands more during the Second Intifada in the early 2000s; no mention of the suicide bombers dispatched from Palestinian towns and cities to wreak death and destruction on Israeli buses and cafes; and no acknowledgment of the human rights of Israelis or their security needs.

Ultimately, the security barrier reduced the number of terror attacks originating in the West Bank by some 90%, demonstrating both its necessity and its effectiveness.

This year, the UN launched a campaign to fight disinformation. Yet in the examples below from its online Palestinian exhibit, the world body is guilty of promoting exactly that.

It wasn’t enough for the UN-Palestinian exhibit to include a multitude of quotes criticizing Israel from politicians, UN figures, academics, and non-governmental organizations. Iconic Israeli figure David Ben-Gurion, the founding prime minister, also appears in the exhibit to seemingly prove Palestinian claims of ill intent on the part of the pre-state Zionist leadership:

This quote has been deliberately taken out of context by Israel haters. In reality, Ben-Gurion was paraphrasing somebody else’s view that he actively disagreed with at a meeting of the Jewish Agency Executive. Far from advocating the cancelation of partition, taking all of the land by force, and dispossessing Palestinian Arabs, the protocols of the meeting show that Ben-Gurion opposed this policy, instead stating Zionism’s expansion would not come about by force, but “through mutual understanding and Jewish-Arab agreement.”

The UN should not be cooperating in the distortion of history. 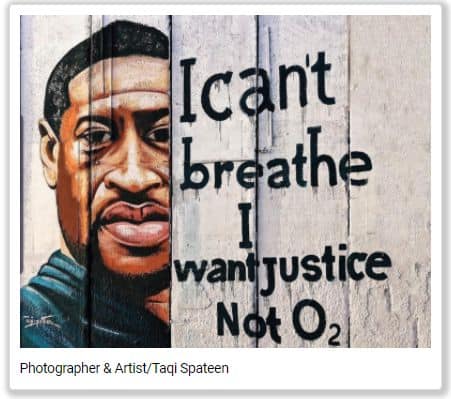 The death in May 2020 of George Floyd, a 46-year-old African-American man, after being handcuffed and pinned to the ground by a white police officer’s knee, created a protest movement against police brutality and racism whose impact was felt beyond the United States.

Floyd’s appearance in an image selected for a UN exhibit is part of an effort by critics of Israel to link the Palestinian cause to more popular social justice issues, in this case, the Black Lives Matter movement. Palestinians are thus portrayed as victims of Israeli racism and brutality in the same way that Floyd suffered.

In reality, however, the comparison doesn’t stand up. While BLM is a product of racial divides in the U.S., the Israeli-Palestinian conflict is not driven by racial discrimination but by a decades-long military, political and territorial dispute. Israeli security measures to stop suicide bombers sent by Hamas to kills Israelis in pizza shops is not about racism, but about saving lives.

On the contrary, the widespread and warm embrace by Israelis of their country’s new peace and normalization agreements and with three Arab states, Bahrain, Sudan, and the United Arab Emirates, only underscores how Israelis are seeking to connect with their Arab and Muslim neighbors. Yet none of these extraordinary developments of Arab-Israeli normalization and reconciliation is mentioned in the UN exhibit.

Image From a Hate Site 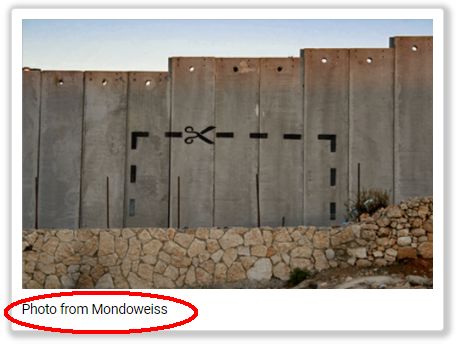 Irrespective of the seemingly benign image, no UN exhibit should be sourcing material from the notorious Mondoweiss, which was described in the Washington Post as a “hate site.” “Mondoweiss is basically one-stop shopping for anti-Israel news,” according to constitutional law professor David Bernstein. “Anything bad that goes on in Israel will be publicized and exaggerated at Mondoweiss.”

Mondoweiss has been called out for publishing antisemitic cartoons and consistently advancing, among other classical antisemitic tropes, the argument that Jews exercise too much power over U.S. foreign policy. As detailed in The Atlantic, the site from which the UN took the above image even publishes contributors to white nationalist, Holocaust-denying journals. 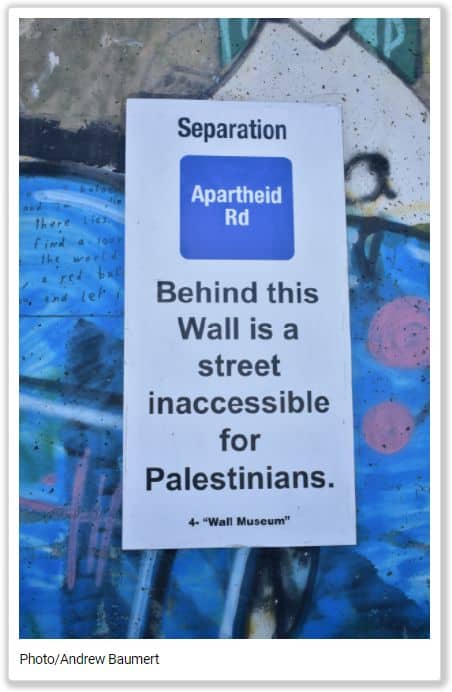 Despite what is shown in the image above, there is no such thing as an “Apartheid Road.”

Rather, as Professor Alan Johnson writes, there are “some roads that have been closed to some Palestinian traffic due to repeated shootings, bombings, and other attacks on Jewish and Arab road users. Before such attacks there were no restrictions.”

By hurling the “Apartheid” smear, the UN-hosted exhibit ignores the fact that, as Johnson notes, Israel also prohibits Israeli traffic from entering Palestinian areas, due to security concerns, and this includes the vehicles of over one million Arab citizens of Israel who have also faced terrorist attacks. All road closures are temporary, notes Johnson, and are “subject to constant review by the Israeli courts.”

The Israeli-only roads are not an example of apartheid. The motives of the Israeli government officials are not to create a permanent situation of discrimination based on race but a reasonable, temporary and emergency response to deadly security threats.

It is telling that the only quote from a named academic or historian in the exhibit is from Ilan Pappe. 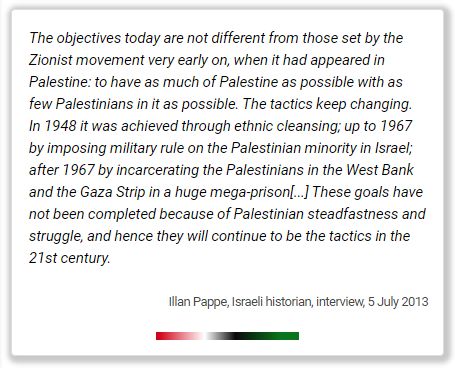 Pappe openly acknowledges that he is not objective, cares little about factual accuracy, and readily admits that ideology drives his historical writings and statements.

“At best,” writes historian Benny Morris, “Ilan Pappe must be one of the world’s sloppiest historians; at worst, one of the most dishonest. In truth, he probably merits a place somewhere between the two.” Morris has debunked Pappe’s incendiary charge that Israel deliberately carried out ethnic cleansing in its War of Independence. That the Palestinians include Pappe as their historian of choice once again demonstrates that parts of the UN exhibit are aimed at the outright delegitimization of Israel. 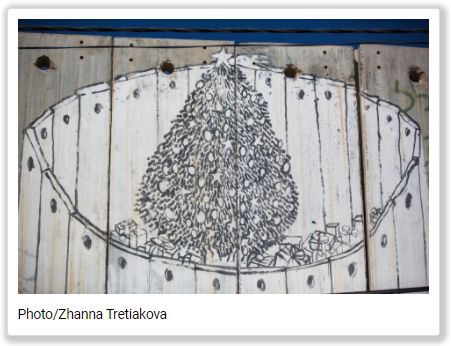 The exhibit’s accompanying text states that some of its images “have deeper meanings including the depiction of the plight of the city of Bethlehem, birthplace of Jesus, completely surrounded by the Wall.” 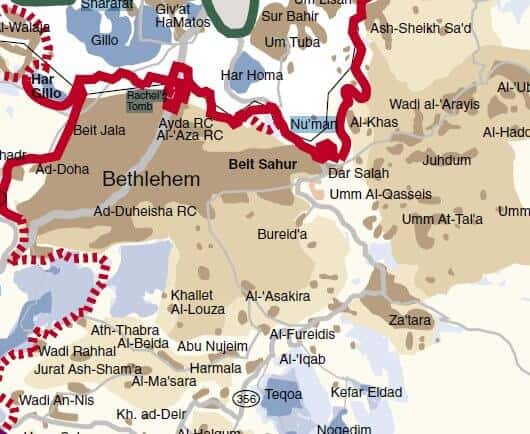 Fighting the Battles of the Past

David Ben-Gurion is not the only Israeli historical leader to appear in the exhibit. They also cite a quote from Moshe Sharett—without mentioning that it dated from when he was 20 years old, four decades before he became prime minister. 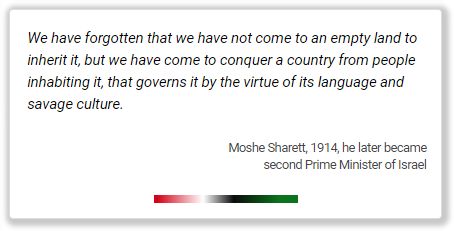 While the Palestinian leadership has maintained a relatively inflexible and intransigent attitude towards Israel’s existence over the decades, Israeli leaders and society have evolved and adapted to changing circumstances.

By the time Sharett became prime minister in 1954,  he was regarded as a dove, and known for his diplomacy and moderation. Sharett’s diary records his opposition to certain Israeli military actions in retaliation against Arab terrorism, and his consistent opposition to Ben-Gurion’s willingness to escalate tensions with Egypt over the closure of the Suez Canal to Israeli traffic. Indeed, it was Sharett’s push for diplomacy rather than military action that resulted in his removal from office by an impatient Ben-Gurion. Sharett consequently opposed Israel’s involvement in the 1956 Suez War.

Sharett argued that “there is a world of difference between seeing force as something to be used when it is the lesser of the two evils and a policy of military intervention for its own sake with the aim of bringing matters to a head.”

That the exhibit includes a quote from as far back as 1914, when Sharett was 20 years old, demonstrates that the Palestinian campaign is not about issues such as settlements or the status of the disputed territories, but is instead focused on Israel’s very legitimacy. 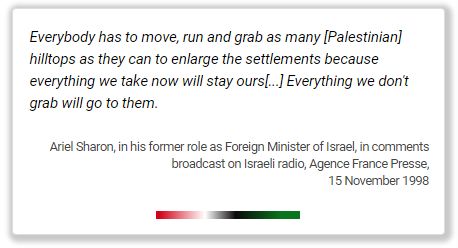 Likewise, the UN exhibit in the image above quotes Ariel Sharon, who undoubtedly had a reputation as a fierce military leader and ‘bulldozer.’ Yet his politics also evolved over the course of his life, culminating in his dramatic decision in 2005 to pull out of the Gaza Strip, dismantling 21 Israeli settlements and evacuating some 10,000 Israeli civilians, as well as all soldiers, from the territory. After Sharon’s Gaza Disengagement, he had announced his intention to pursue territorial withdrawals from the West Bank, before he succumbed to a stroke in 2006.

For both Sharett and Sharon, what was quoted by the UN exhibit distorts their lives and legacies. 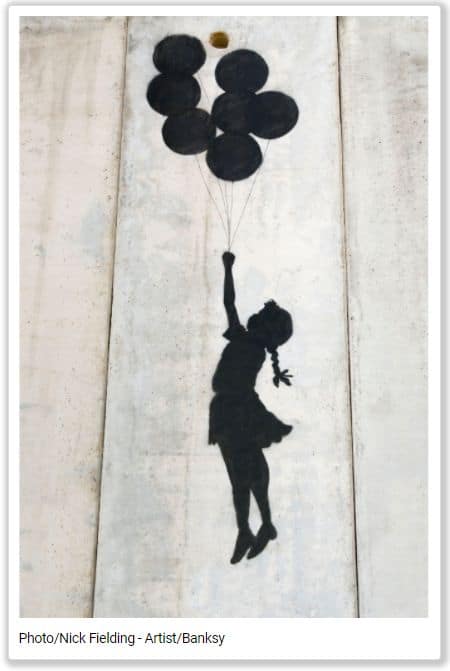 Terror was most likely not on the mind of famous British artist Banksy when he painted the above image of a little girl clutching a bunch of balloons. Today, however, balloons have a far less innocent image in the minds of Israelis, particularly those living in the country’s south near the Gaza Strip.

As recently as the day of the exhibit’s official opening, Palestinians have launched balloons with explosives into Israel from Gaza. These arson balloons have regularly sparked fires in open fields, devastating flora and fauna as well as threatening the lives and livelihoods of Israelis.

Hardly an appropriate image for a UN exhibit.

Ultimately, the UN’s virtual Palestinian exhibit is just the latest example of the anti-Israel propaganda that courses through various bodies of the United Nations system. Unfortunately, with the coronavirus pandemic in the background, the UN has found the perfect opportunity to spread its hate and misinformation to a wider audience online.

Relying on inflammatory and misleading imagery, including one from an arguably antisemitic website, and distorted or decontextualized quotes, the exhibit violates the UN’s declared principles of objectivity, and should not have received its seal of approval or be hosted on the UN website.

SHAME: Massive Chinese propaganda exhibit next to the UN Human Rights Council where China sits as a member and enjoys complete impunity. Plastered across the monumental central hall are giant lies about Tibetans, Uighurs & 1.3 billion other Chinese “happy” with human rights. pic.twitter.com/4H0oO5875H