Geneva, June 22, 2006 — UN Watch, a non-governmental observer at the 29th International Conference of the International Red Cross and Red Crescent Movement, commended the special leadership role of the Swiss government in resolving the emblem issue that enabled today’s admission of the Israeli and Palestinian relief societies.

“We congratulate Swiss Foreign Minister Micheline Calmy-Rey for her diplomatic leadership and determination that led to today’s victory for the principles of universality and international humanitarianism,” said UN Watch Executive Director Hillel Neuer.  “Thanks to the Swiss government’s unique role, noble commitment and long efforts, a new bridge for Middle East peace has been constructed through people-to-people and on-the-ground humanitarian cooperation.”

UN Watch founder Morris Abram was one of the 18 experts charged by the Movement to resolve the emblem issue a decade ago.  The Geneva-based NGO has worked closely for many years with leading officials in Geneva to achieve today’s resolution.

UN Watch regretted that some countries, Syria in particular, had attempted to block the resolution and derail the conference, apparently to inflame tensions in the region.  Conference delegates were taken aback when the Syrian representative directed stinging words toward Dr. Kellenberger, accusing the ICRC of “lacking neutrality and objectivity.” 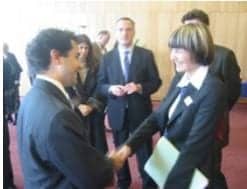 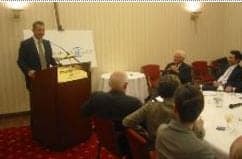 Receiving awards in the shape of the new Red Crystal emblem are (left to right): Ambassador Didier Pfirter, Swiss special envoy on the emblem issue; François Bugnion and Olivier Durr, ICRC Director and Advisor for International Law and Cooperation within the Movement.  UN Watch Co-Chair David Harris (standing on the right) led a delegation from the American Jewish Committee who recognized the officials’ efforts in resolving the emblem issue. (March 2006)