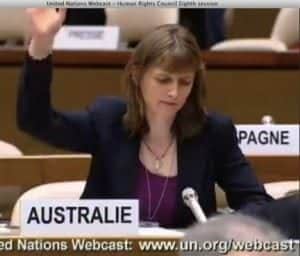 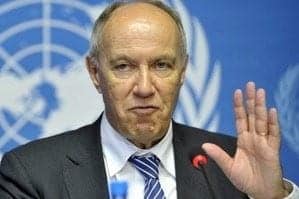 GENEVA, March 5, 2014 – A senior UN official alleges that Francis Gurry, the Australian head of the world body’s intellectual property agency, engineered the theft of personal items from employees to extract DNA samples, and then covered it up by intimidation and by suppressing attempts to investigate it, according to a legal complaint filed recently at a UN tribunal in Geneva.
The allegations are expected to hurt Gurry’s chances for reelection next week as director-general of the UN’s World Intellectual Property Organization (WIPO), a bid already weakened amid controversy over his role in running what a bipartisan group of U.S. lawmakers described as “a secret program to ship high-end computers and other electronic gear to North Korea and Iran.”
Gurry’s competitors in next week’s contest to head WIPO are his colleague, deputy director-general Geoffrey Onyeama from Nigeria, and two ambassadors, Alfredo Suescum of Panama, and Jüri Seilenthal of Estonia.
Led by California Democrat Zoe Lofgen, 12 members of the U.S. Congress have urged Secretary of State John Kerry to oppose Gurry’s candidacy, saying his tenure harms “the interests of the United States and its large community of innovators.”
The whistleblower behind the new legal complaint, Dr. Miranda Brown, was Gurry’s strategic advisor at WIPO from June 2011 until November 2012, when she was allegedly pressured to leave.
The charges are being taken seriously in Geneva’s international circles where Brown is held in high regard, say insiders.
As a senior Australian diplomat, her allegations against a fellow Australian are unusual within the UN’s highly politicized culture of solidarity among fellow nationals. Brown was even her country’s deputy ambassador when Gurry was first elected.
She now serves as a high-level official in the office of the UN high commissioner for human rights.
Her complaint also alleges that Gurry’s conduct in running the agency showed “a pattern of degrading treatment, discrimination and abusive behavior towards staff.”
The criticism is echoed by other top officials within the organization, who have described Gurry as “erratic”, “manipulative”, “unpredictable”, and “secretive,” saying he fosters a negative work environment at WIPO.
The international agency is considered important in business and government circles worldwide because it runs the global patent system, processing over 200,000 confidential invention applications every year, many of them from America. The system generates more than $300 million in annual fees.
“This organization, more than most UN agencies, requires trustworthy leadership,” said Hillel Neuer, executive director of the Geneva-based monitoring group UN Watch.
“This was exactly the point that the U.S. made back in 2007, when Gurry’s predecessor, Kamil Idris of Sudan, was found to have lied about his age, and we trust that America would not apply a different standard to an Australian than was applied to his African predecessor.”
The U.S. ambassador at the time, Warren Tichenor, forcefully demanded Idris’ resignation, saying that “member states and the employees of WIPO deserve to have an organization that is led with the highest professional and ethical standards.”  As a result, Idris resigned.
“The sense of déjà vu is palpable,” said Neuer, “only this time it’s not someone who merely fibbed about his age.”
“By any account, Gurry’s conduct falls far short of the ‘highest professional and ethical standards’ set by the United States in 2007.”
Brown’s complaint alleges serious wrongdoing by Gurry compounded by intensive efforts by him to cover it up and prevent an investigation.
According to the complaint, Gurry, in the run-up to his election in 2008, had been the target of anonymous letters accusing him of financial improprieties and sexual harassment. He suspected senior staff members, but had no proof and could not get Idris to allow a staff dragnet for DNA testing, the complaint alleges.
According to Brown, he then arranged to have personal items secretly removed from employees’ offices and handed over to the Swiss authorities for DNA analysis.
When everyone was cleared, he allegedly tried to keep the theft secret.  However, one of the victims found out and complained. According to the complaint, Gurry then threatened to move her job overseas in order to buy her silence. Brown tried to have the incident investigated, but Gurry managed to block it, according to the complaint.