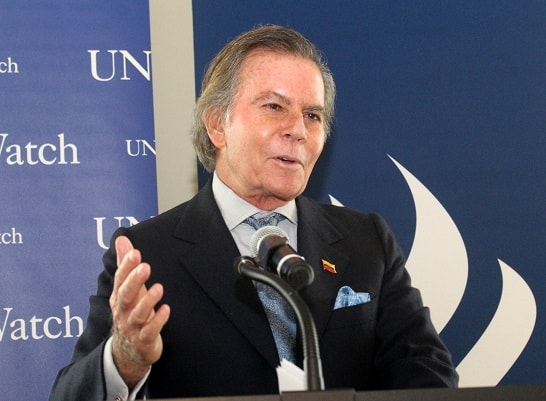 “What does Israel plan to do with the Palestinians?” asked the Venezuelan ambassador to the UN, Rafael Ramirez. It was, of course, a rhetorical question.

Speaking at an informal session of the Security Council this month, the representative of a despotic, corrupt and militarized regime — one that has bankrupted Venezuela, hijacked the judicial system to throw political dissidents in jail, and counts Iran and Syria among its closest allies — rained down anti-Semitic rhetoric upon the State of Israel.

Ramirez went on to flatly ask whether Israel was “trying to impose a ‘final solution’ on the Palestinians in the West Bank.”

In making the obscene comparison between Israel and the Nazis, the Venezuelan delegate engaged in the ultimate blood libel — accusing the survivors of the Holocaust of having turned into the same monsters who exterminated 6 million Jews and millions of others. Even UN Secretary General Ban Ki-moon publicly rejected such a disgusting comparison, as did other UN member representatives including France, the United Kingdom and the United States.

(Ramirez has since apologized privately to Israel’s UN ambassador, but has yet to do so in public.)

The Venezuelan remarks, of course, were meant only to fuel hatred. Ramirez never had any intention of addressing the subject of the meeting: the protection of civilians affected by the ongoing conflict between the Palestinians and Israel.

Even worse, arguably, is the fact that these comments were made under the auspices of a process that is designed to increase dialogue and understanding, rather than boosting hatred and polarization.

I know this to be the case because I launched this process — and I am honored that it is officially named the Arria Formula. Its purpose is to enable members of the Security Council to discuss informally issues of critical importance to international peace and security.

Since it was introduced in 1992 in the midst of the genocidal war in Bosnia, at a time when I was serving as Venezuela’s ambassador to the UN, the Arria Formula has become a useful tool in the toolbox of Security Council proceedings.

Not once has it been used to promote racial hatred and anti-Semitism — that is, until Ramirez came along. His diatribe was a continuation of the policy of the late Venezuelan dictator Hugo Chavez, who expelled the Israeli ambassador in Caracas during the Gaza war of 2009 during a national public broadcast, and spewed these words of hate: “From the bottom of my soul, I damn you Israel. You are a criminal and terrorist state that is openly exterminating the Palestinians.”

Be on high alert: All Venezuelan institutions, from the supreme court to the National Electoral Council, have been hijacked by the regime of Chavez’ successor, Nicolas Maduro, in order to give its ongoing assault on human rights the appearance of democratic legitimacy.

The scapegoating of Israel is by design — to distract Venezuelans and the world from what is a crime in progress.

Venezuela was among the first countries to recognize Israel, and we have had the good fortune of enriching our country with the talent and the work of thousands of Jews from all over the world.

While I was Venezuela’s ambassador to the UN, we were among the first states to sponsor a measure to revoke the infamous UN General Assembly resolution of 1975 that equated Zionism with racism. Twenty-five years later, my successor is behaving as though that resolution is still on the books.

Instead of shaming our people with its lamentable behavior, the Maduro regime should be more concerned with the magnitude of Venezuela’s unprecedented crisis.

There is raging inflation, the world’s highest, that has destroyed worker salaries. Violent crime is out of control. The health care system is in a dismal state. There are blackouts and severe food and medicine shortages. People, understandably, are protesting in the streets.

And the Maduro regime is exploiting the emergency it created in dangerously authoritarian ways.

The regime has castrated the power of the National Assembly to legislate. Maduro just passed a decree that puts him and the armed forces in complete control, to rule without any kind of restrictions, as well as limiting the fundamental constitutional rights and guarantees of the people. In sum, he has created his own personal and dictatorial constitution.

The regime also ought to worry about judicial proceedings taking place in a New York court regarding two members of the Venezuelan presidential family who are facing federal narcotics charges. These proceedings are surely the first of many more to come.

The regime should focus more on its long train of abuses against the Venezuelan people and less on the horrific crimes it imagines Israel is longing to commit.

Mr. Arria was Venezuela’s permanent representative to the United Nations from 1991-93.