This week, in violation of international humanitarian law, Palestinian Islamic Jihad fired over 100 rockets at communities in southern Israel.

Two of these rockets hit a children’s playground in the town of Sderot. Under the Geneva Conventions, these are war crimes.

Children should not have to live their lives in fear of terrorist rockets raining down on them.

The United Nations should condemn these war crimes. It should show its solidarity with Israeli communities now living under imminent risk from rockets and other terrorist threats. This Council should strongly support Israel’s right to defend itself, and its people, against acts of terror.

The report before us today purports to address “all violations of international law” in the Palestinian territories.

Why, then, does the report mention nowhere that Palestinian terrorist groups, in the past year alone, fired more than 1400 rockets at Israeli communities?

When fired at Israeli civilians, the rocket attacks are war crimes; when fired from civilian areas in Gaza, using civilians as human shields, they are double war crimes. 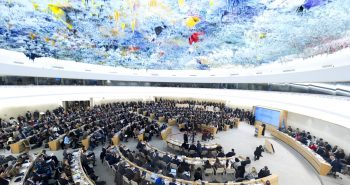