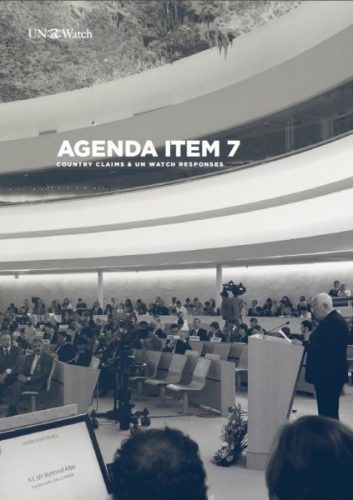 An examination of country statements delivered at the United Nations Human Rights Council under the agenda item concerning Israel.

Every session of the UN Human Rights Council devotes a special agenda item to the “Human rights situation in Palestine and other occupied Arab territories,” which is defined by UNHRC Resolution 5/1 as covering “Human rights violations and implications of the Israeli occupation of Palestine and other occupied Arab territories.” The other nine items on the Council’s permanent agenda are all generic, and do not refer to any particular country or situation. There is no special agenda item on Iran, Syria, North Korea, or any other country. Only Israel.

The debate is entirely one-sided. Israel, the United States and most other democracies no longer participate in the proceedings of Agenda Item 7, in protest against its selectivity. As a result, many claims enter the record at the United Nations despite having no basis in fact.

The purpose of this report is to remedy that situation by providing the first-ever examination of claims made under Item 7, and to provide a detailed analysis, citing to sources of fact and international law. The period covered in this report is the six UNHRC sessions held in 2019 and 2020.

When the creation of the new Human Rights Council was being debated in 2006, the UN’s Department of Public Information distributed a chart promising that, in its words, the “agenda item targeting Israel” of the old Commission on Human Rights, Item 8, would be replaced at the new council by a “clean slate.” Although this course correction never came to fruition, it is important to note that a key UN document acknowledged the true nature of the agenda item: to target Israel.

Despite the promise of reform, the new Human Rights Council that was established in June 2006 revived the infamous agenda item, which became Item 7. No other country in the world is subjected to a stand-alone focus that is engraved on the body’s permanent agenda, ensuring its prominence, and the notoriety of its target, at every council meeting.

The Council’s credibility and legitimacy remain compromised so long as one country is singled out while serial human rights abusers escape scrutiny. Item 7 negates the Council’s own founding principles of non-selectivity and impartiality.

Indeed, UN Secretary-General Ban Ki-moon criticized this act of selectivity a day after it was instituted. On June 20, 2007, Mr. Ban “voiced disappointment at the council decision to single out Israel as the only specific regional item on its agenda, given the range and scope of allegations of human rights violations throughout the world.”

In addition, Western democracies have on numerous occasions stated their opposition to Item 7. In statements delivered before and after its adoption, traditional supporters of human rights opposed the agenda item as biased. The UK said that “the practice of ‘singling out one’ risked undermining the Human Rights Council’s own principles.” France “regretted that the agenda was imbalanced by the singling out of Palestine, which was contrary to non-selectivity.”

Australia and the Netherlands expressed similar objections, describing the agenda item as “unhelpful.” Canada said the Council breached its own principles of universality, impartiality, objectivity, and non-selectivity. Targeting any UN member state, said Canada, was “politicized, selective, partial, and subjective.” The US has also been a forceful opponent of Item 7.

Importantly, as a general rule today, the US, the EU and other democracies no longer speak under Item 7. Rather, they voice any of their criticisms of Israel and the Palestinian Authority during the general debate on all country human rights situations, which is Item 4.

It is our hope that the Council will uphold the UN Charter promise of equal treatment for all nations by removing Agenda Item 7. Until that happens, we are prepared to correct the record, by publishing reports such as this.

CLAIMS EXAMINED IN THE REPORT

Claim 2: “Israel is responsible for the impasse in peace talks”

Claim 5: “Palestinian refugees have a right of return”

Claim 7: “The protesters at the Gaza border were peaceful”

Claim 8: “The Gaza protesters were civilians”

Claim 23: “Israel engages in military aggression against Syria and Lebanon”