PRESS RELEASE
GENEVA, September 23, 2014 – A Greek Orthodox priest from Nazareth today told the UN Human Rights Council to “end your witch hunt of the only free country in the region.” (See full text below.)
Father Gabriel Naddaf, one of the most controversial public figures in Israeli Arab society, addressed the 47-nation body 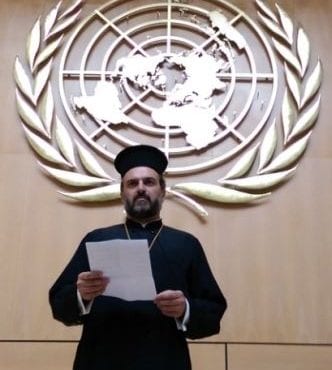 today on behalf of the Geneva-based human rights group UN Watch.
Because of his efforts to encourage Arab Christian integration into mainstream Israeli society, Father Naddaf, head of the Greek Orthodox Church in Yafia, near Nazareth, has been denounced by Arab members of the Israeli Knesset and receives regular threats of intimidation against himself and the safety of his family.
The Greek Orthodox patriarchate in Israel banned Father Naddaf from entering Nazareth’s Basilica of the Annunciation, and has repeatedly threatened to dismiss him from his post in Yafia, because of his public statements against the treatment of Christians in the Arab world. For more on his bio, click here.

Translation from Arabic: Intervention to UN Human Rights Council by Father Gabriel Naddaf, on behalf of UN Watch, Sept. 23, 2014
Thank you, Mr. President, I am honored to speak today on behalf of UN Watch.
My name is Father Gabriel Naddaf, I stand here before you as a Christian from the Holy Land, a resident of Nazareth, the very town in which Christ grew up and began his Ministry.
As I speak to you now, across the Middle East, the soil is being soaked with the blood of Christians.
Across the Middle East, in the last 10 years, one hundred thousand Christians have been murdered each year. This means that every five minutes a Christian is killed because of his faith.
A century ago, Christians were some twenty per cent of the Middle East. Today, that figure is estimated to be around four per cent. Those who can escape persecution at the hands of Muslim extremists have fled.
Since 2000, over seventy-seven per cent of Iraq’s seven hundred thousand Christians have fled. In Syria where there were two million Christians, there are now less than a quarter of a million.
Those who remain, exist as second if not third class citizens to their Muslim rulers. They face financial discrimination, physical threats, and have been subjected to the most heinous of crimes. Rapes, executions, forced conversions. Why? Because they believe in a different faith. A faith with a universal message of love and peace for all mankind.
But, in the Middle East today, there is one country where Christianity is not only not persecuted, but affectionately granted freedom of expression, freedom of worship and security. Where is that one country you may ask?
It is Israel, the Jewish State. Israel is the only place where Christians in the Middle East are safe. In Israel, Christians enjoy high socio-economic standing. In Israel, Christians are free.
Christian across the Middle East are greatly suffering from discrimination and religious intolerance.
However, more and more, the Christians of the Holy Land are understanding that we share so much with the Jewish people. Not only that Jesus was a practicing Jew, of the lineage of King David and born in what Bible calls the Jewish town of Bethlehem.
But in modern times, in the face of religious persecution and terrorism from fanatical extremists, we share a will for peace and harmony, for coexistence in the land of all of our forefathers.
But does the world, and indeed this council speak up against the persecution of Christians in the Middle East? Does the world applaud Israel for its ongoing democratic values and dedication to freedom of religion? No, sadly not.
So much of the international community has perversely chosen to single out Israel for criticism and condemnation. This is a double crime. It is a false witness to the Middle East’s only free society, and gives support to those who commit atrocities against, Jews, Yazidis, Christians and even fellow Muslims. Erasing the context of terrorism and persecution for political gain.
It is time the world woke up to the fact that those who want to destroy the Jewish State are signing the death warrant on the last free Christians in the Holy Land.
So, as the angel Gabriel once stood before the mother of the lord, in my town of Nazareth, and announced the coming of Christ, it has fallen to me, Gabriel of Nazareth, to plead to you, leaders of people, seekers of peace, end your witch hunt of the only free country in the region. Please, hear the cry of the Christians of the Middle East before you may read of us only in the history books.
Thank you, Mr. President.