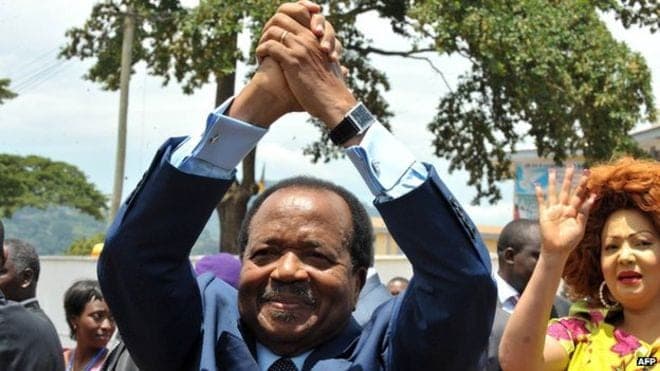 Update: Cameroon was elected to the UN Human Rights Council, receiving 176 out of 193 possible votes. A simple majority of 97 was required.
Cameroon’s bid for a seat on the UN’s top human rights body should be rejected, as it fails to meet the basic membership criteria. The election of 18 new countries to the Human Rights Council will be held at the UN in New York tomorrow, October 12, 2018. See our full report on all candidates, and press release.
Cameroon’s Human Rights Record
Cameroon commits serious human rights violations, including:

Discussion
Cameroon is ruled by President Paul Biya of the Cameroon People’s Democratic Movement (CPDM) who has governed the country since 1982.[1] Though Cameroon holds elections, irregularities are commonplace, including bribery, gerrymandering, and government control of the electoral commission. According to Freedom House, “corruption is systemic and bribery is commonplace in all sectors.”[2]
In addition, the government uses a variety of tactics to harass and suppress the opposition. The opposition group Southern Cameroons National Council (SCNC) was banned in January 2017. In February 2017, the government banned a rally by the main opposition party—Social Democratic Front (SDF). In October 2017, Biya critic Aboubakar Siddiki of the Cameroon’s Patriotic Salvation Movement was sentenced to 25 years in prison for attempting to incite a revolution.[3]
Since late 2016, there is a growing separatist movement in the country’s anglophone region, a response to the Francophone government’s discriminatory policies and its heavy-handed tactics against protests by Anglophone lawyers and teachers. The conflict has been marked by violence and atrocities on both sides.[4] According to the UN, the fighting has forced some 20,000 Cameroonians to flee to Nigeria.[5] Another 160,000 are internally displaced.[6] Government forces are accused of numerous violations, including massacring civilians, rape, and burning villages.[7] A recent report by Human Rights Watch charges government forces with killing unarmed civilians, including older women and individuals with physical and mental disabilities, arson attacks in at least 20 villages, and mass arrests.[8]
According to the U.S. State Department’s country report on Cameroon for 2017, in just a few days between September 28 and October 2, 2017, government forces used excessive force against Anglophone protesters, killing at least 40.[9] Other government tactics against the protesters have included arbitrary detention, enforced disappearances, torture and other cruel, inhuman or degrading treatment, and sexual abuse.[10] In June 2018, Amnesty International published a report detailing widespread torture by government forces.[11] Recent reviews of the country by the Human Rights Committee and the Committee Against Torture expressed concerns about these issues.[12]
Several UN officials have expressed alarm about the worsening situation in the country, including Secretary-General Antonio Guterres and former High Commissioner for Human Rights Zeid Hussein.[13] In her opening address to the 39th session of the Human Rights Council, incoming High Commissioner for Human Rights Michelle Bachelet criticized both the government and armed groups in connection with the violence.[14]
Journalists in Cameroon are subjected to harassment and worse. In January 2017, Deutsche Welle journalists were threatened with sanctions if they covered the anglophone protests and a radio station was shut down after airing a debate on the protests. In December 2017, Cameroonian-American author Patrice Nganang, was detained and deported for criticizing President Biya. Two journalists were criminally charged for their reporting activities—Mancho Bibixy for calling for secession, and Ahmed Abba for his reporting on Boko Haram.[15]
Cameroon’s UN Voting Record
Negative: At the General Assembly, Cameroon voted for a resolution denying countries the right to sanction regimes that abuse human rights, and voted to delay the work of the Special Rapporteur on violence against LGBT. Cameroon abstained on resolutions that spoke out for victims of human rights abuses in North Korea, Iran and Myanmar, and for victims of Russian aggression in Ukraine and Georgia.