China praised in UN review of its human rights record 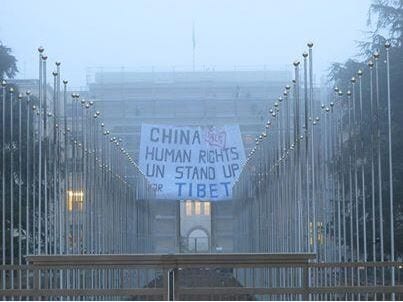 Pro-Tibetan activists were detained after scaling up the UN compound in Geneva where China’s
human rights record was being reviewed to unfurl a giant protest banner. Click here for details.

GENEVA, October 22, 2013 – Right off the heels of yesterday’s overwhelmingly glowing review of Saudi Arabia’s human rights record, today the UN Human Rights Council scrutinized China, which won equal praise from the same cohort of anti-democratic regimes, including Cuba, Russia, and Venezuela. (See below today’s statements praising China’s human rights record.)
“Today, like yesterday, we witnessed another meeting of what has sadly turned into a mutual praise society. Yesterday, it was China lauding Saudi Arabia; today, Saudi Arabia returned the favor,” said Hillel Neuer, executive director of the Geneva-based human rights group UN Watch, which has for years testified before UN bodies on China’s persecution of political dissidents.
Despite widespread recognition of what Neuer called China’s “gross, systematic and shameful human rights abuses,” China is poised to win a seat on the Human Rights Council (HRC), in elections to be held on November 12th.
UN Watch today called on U.S. ambassador Samantha Power and EU foreign minister Catherine Ashton to protest China’s candidacy.
UN Watch will be bringing famous dissidents inside the UN to mobilize opposition to the Chinese and other “absurd candidacies.”
Chinese dissident Yang Jianli, the head of Initiatives for China and a member of UN Watch’s international advisory board, is spearheading an online petition to oppose China’s bid.
“Electing China as a world judge on human rights would be like asking the fox to guard the chickens,” said Neuer.
In its official nomination papers for the HRC, China claims: “The Chinese Government respects the principle of the universality of human rights and has made unremitting efforts for the promotion and protection of the human rights and fundamental freedoms of the Chinese people. China earnestly fulfills its obligations under relevant international human rights treaties.”
“This is a complete lie,” said Neuer. “The truth is that the Chinese Communist Party has Nobel Peace Laureate Liu Xiaobo behind bars, denies 1.3 billion human beings their basic freedoms of assembly, speech and religion, and crushes Tibetans, Uighurs and other minorities.”
Yet as evidenced by today’s review, China is poised to win.
After China presented the HRC with a 30-page report on its human rights record, the council today held a three-hour “interactive dialogue,” with over 130 delegations making statements and Chinese delegates periodically responding. The exercise is known as the “universal periodic review” (UPR), which examines every UN member state once every four years.
“A recidivist human rights abuser like China should not have been praised effusively by members of the UN’s top human rights body, nor should it be poised to become a voting member,” said Neuer.
“Instead the UNHRC members should confront China’s practices of prisoner torture, media control, and discrimination of gender, race, religion, and sexual orientation,” said Neuer, who noted that these and other abuses were amply documented in written submissions to the UN by human rights NGOs.
UN Watch commended the countries that challenged China’s abuses. Canada spotlighted Chinese repression of human rights advocates, persecution of religious minorities including Christians, Tibetans, Uyghurs, and Falun Gong, and the detention of political prisoners including artists, reporters and dissidents. Britain called for reductions in capital crimes; the U.S. urged an end to harassment and detention of human rights activists and the protection of ethnic minority rights including Tibetans. Ireland expressed concerns for abuses against the LGBT population and called for anti-discrimination laws.
___________________

Islamic Republic of Iran: “We commend progress in social and economic life in China… We wish China prosperity for further promotion and protection of human rights…”

Cuba: “Successes in the country are great. We commend the protection of the rights of the Chinese population.”

Russia: “We commend China on protection of rights of religious beliefs…”

Venezuela: “We are pleased to hear of China’s remarkable progress since the last review in 2009…”

Yemen: Commends “China’s remarkable achievements in economic and social achievements…”
Zambia: Commends “China’s judicial reforms, human rights education, protecting economic and social rights… China should continue on the path of protecting human rights…”
Zimbabwe: “Warmly commends China for its comprehensive report on human rights programs and implementing council recommendations. We extend our warmest wishes for success to the government and people of China in all their future endeavors…”
Afghanistan: “We appreciate the steps taken by China to implement the council’s recommendations, and for promoting human rights awareness, and conducting human rights training for government officials…”
Congo: “China has great commitment to a constructive dialogue…”
Lebanon: “We welcome China’s positive steps to strengthen its human rights framework…”
Singapore: “We commend China’s 60 judicial reforms and 130 reforms of people’s courts…”
Chile: “We commend China on the progress of lifting hundreds of millions of people out of poverty…”