BOOM! Citing UN Watch data on the U.N.'s peculiar fixation with #Israel in 86% of its resolutions, CNNs Jake Tapper called out the rank hypocrisy of murderous tyrannies like #Venezuela, #Syria & #Yemen taking the floor today at the U.N. General Assembly to lecture and condemn the United States on human rights and peace.More: https://www.unwatch.org/2017-unga-resolutions-singling-israel/

On Thursday, the United Nations voted 128 to nine to condemn the U.S. for recognizing Jerusalem as the capital of Israel.

But what kind of countries were at the U.N. podium lecturing America?

Citing UN Watch statistics, CNN’s Jake Tapper, host of The Lead, slammed Venezuela, Syria, Yemen, and others for having what Tapper deems “questionable records” in their own right.

“The U.S. imperils global peace, says the representative of Venezuela — a country in a humanitarian disaster,” Tapper said. “With violence in the streets, an economy in complete collapse, citizens malnourished, dying children being turned away from hospitals, starving families joining street gangs to scrounge for food. On what moral platform does the government of Venezuela stand today?”

Tapper added, “Listening to these countries including; North Korea, and Myanmar, and Turkey, and China, lecturing the united States in any way about human rights and peace might seem a bit much.”

The Lead host went on to suggest that there might have been more to the U.N. vote on Thursday. He cited UN Watch’s statistics that of the 97 resolutions adopted by the General Assembly which criticized an individual country, 83 were focused on Israel.

“Is Israel truly deserving of 86 percent of the world’s condemnation?” Tapper said. “Or possibly, is something else afoot at the United Nations? Something that allows the representative of the Assad government to lecture the United States for moving its embassy?

Citing @UNWatch, Israeli embassy says from 2012-2015, the UNGA adopted 97 resolutions criticizing countries; 83 of which (86%) were against Israel.

OMG I can't believe the United Nations, that hive of scum and villainy, is condemning the US over recognizing Israeli sovereignty over Jerusalem. It's not like they're rabid anti-Semites or anything. (Stats below courtesy of https://t.co/bQQDd2bcVo) pic.twitter.com/EagaKWrjh7 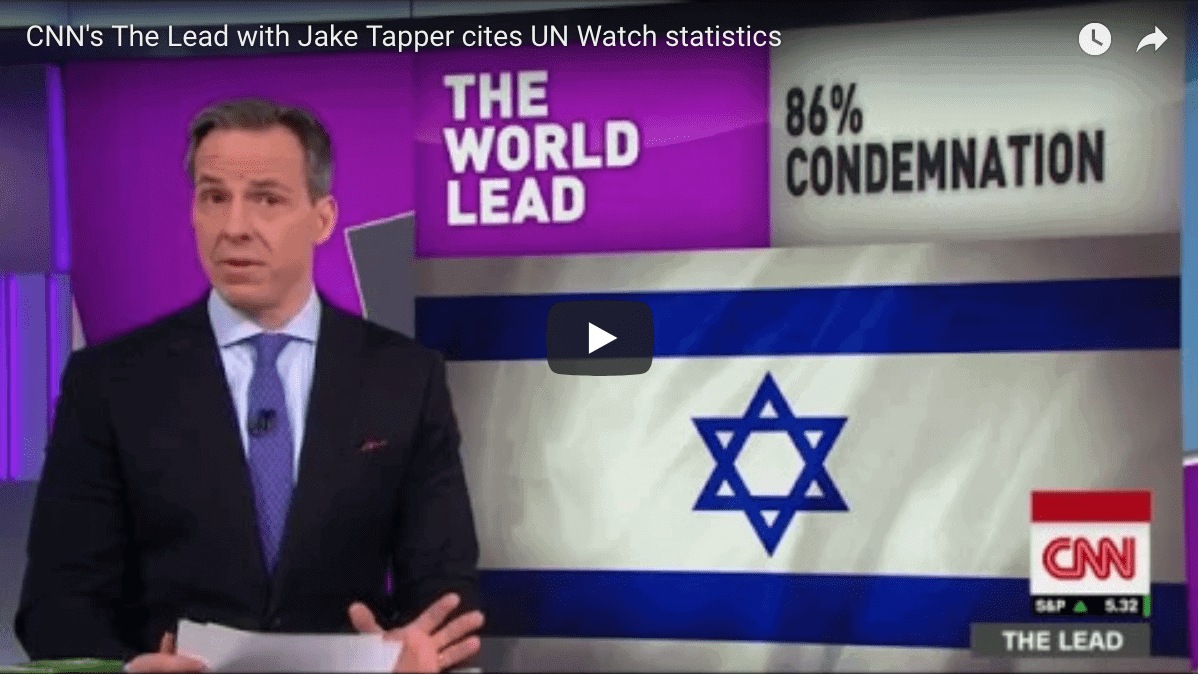