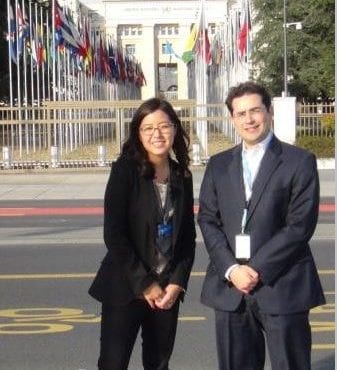 the daughter one of its most well-known political prisoners, prompting a high-profile international clash in the plenary, as the U.S., Britain, France, Germany, Ireland, Hungary, Switzerland and the Czech Republic squared off against China, Cuba, Pakistan, Saudi Arabia and Venezuela on whether she could be allowed to continue her remarks. See full speech below.
Speaking today on behalf of the non-governmental human rights group UN Watch, Ti-Anna Wang, the 24-year-old Canadian daughter of jailed Chinese democracy leader Dr. Wang Bingzhang, took the floor at the 47-nation council one day before it is set to adopt a major report on China’s human rights record.
Only one minute after Ms. Wang began her testimony, the Chinese delegate, supported by successive interventions by four other authoritarian regimes, objected that Ms. Wang was only permitted to address abstract “situations of human rights,” but not specific cases such as her father’s imprisonment.

The U.S. delegate, the first to defend UN Watch, said that “accredited NGOs must be permitted to speak in the council,”

adding that “it is essential that civil society voices be heard here in an atmosphere of open expression.”

In a rare chorus of voices defending NGOs’ right to speak, Britain, France, Ireland, Hungary, Switzerland and the Czech Republic each took the floor to likewise defend UN Watch’s right to speak.
In the end, Human Rights Council president Baudelaire Ndong Ella ruled that UN Watch had the right to address specific examples, and he gave the floor back to Ms. Wang, allowing her to complete her statement.
“While it is scandalous that China and other dictatorships were just elected as members to the UN Human Rights Council, today this forum also managed to be a platform for the voices of the victims, not only the perpetrators,” said UN Watch executive director Hillel Neuer.
Ti-Anna Wang was born and raised in Montreal, Canada, and is a graduate of McGill University. She has dedicated the past 12 years of her life to trying to free her father, the founder of China’s overseas democracy movement, who has been serving a life sentence in China since 2002.
Ms. Wang’s personal story inspired the heroine in the recent novel Nine Days, written by Washington Post editor Fred Hiatt.
Her first name commemorates the victims of the 1989 Tiananmen Square Massacre in Beijing, led by students seeking democracy and human rights. The 25th anniversary of the massacre will be marked this June.
______________________________
UN Watch Testimony to United Nations Human Rights Council, delivered by Ms. Ti-Anna Wang, 18 March 2014.

Thank you, Mr. President.
My name is Ti-Anna Wang, and I’m the daughter of a Chinese political prisoner.
I wish to use my family’s experience to draw this Council’s attention to the situation of human rights in China.
My father, Dr. Wang Bing Zhang, is a medical doctor by training, who chose to devote his life to founding the Chinese overseas democracy movement. In 2002, he was abducted while traveling in Vietnam, and taken to China. He was tried, falsely convicted, and sentenced to life in prison. It’s now been 12 years, and my father is still behind bars — in solitary confinement.
On one matter, I do wish to express my sincere gratitude to the Chinese government. My father was recently transferred from Beijiang Prison to Shaoguan prison, where his treatment and conditions have significantly improved. My family is thankful for this news.
But still, my heart is broken from the last 12 years of my father’s imprisonment.
INTERRUPTION BY CHINA ON POINT OF ORDER, supported by points of order by Cuba, Pakistan, Saudi Arabia and Venezuela, objecting to UN Watch’s statement. The U.S., Britain, France, Germany, Ireland, Hungary, Switzerland and the Czech Republic exercised points of order in defense of UN Watch. The Council president gave the floor back to UN Watch.
More painful is that the authorities have punished me for the advocacy work that I have done on my father’s behalf. For the past five years, they have banned me from visiting him. This year, they stopped delivering my letters.
Mr. President, I have come here today, to make two appeals.
First, to the Chinese government. I know that you consider my father an enemy of the state. But you have spoken here of China’s commitment to the development of human rights.
Therefore, I ask you to recognize my father as your partner in nurturing China’s progress; and to acknowledge that you both share a fundamental love of country.
Second, I wish to make an appeal to this Council. China was recently elected to this body, and as such, it has pledged to uphold the highest standards in the promotion and protection of human rights.
Accordingly, I urge this Council to call on China to release my father, and all other prisoners of conscience.
Thank you, Mr. President. 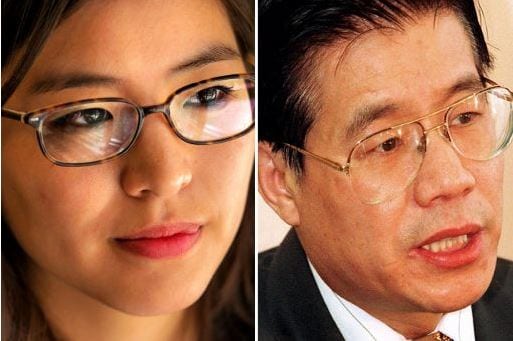