Cuban Activist to UN: 'Obvious that Cuba does not belong in the UN Human Rights Council' 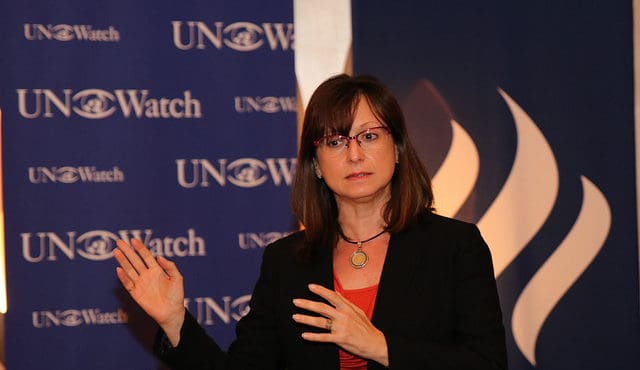 Following are the prepared remarks of Maria Welau, cofounder of the Free Society Project and executive director of the Cuba Archive, delivered at the October 6, 2016 United Nations press conference organized by UN Watch, Human Rights Foundation, and the Raoul Wallenberg Human Rights Centre, to oppose the election of dictatorships to the UN Human Rights Council.

Cuba should not be part of the U. N. Human Rights Council, responsible for the promotion and protection of all human rights around the globe, because it is a totalitarian state that violates —in its laws and practices— essentially all applicable articles of the Universal Declaration of Human Rights.
According to a comprehensive ranking by the Washington, DC based human rights’ organization Freedom House, Cuba is one of the “least free” countries in the world; it is the only one with that classification in the Western Hemisphere. In Cuba, the usurpation by the state of civil, political, and economic rights has few historic precedents. The all-mighty Cuban state is the embodiment of a one-party Communist system under the absolute rule of one family.

Repression in the Laws
Cuba’s laws embody the totalitarian nature of system only requires a cursory reading. Here are some highlights:
1. The Constitution
Rather than guaranteeing rights to the citizens vis-a-vis the state, which is what Constitutions do, Cuba’s Constitution does the opposite; with an inverted sovereignty, it concentrates power in the state and the Communist Party in the most extreme form. Article 5 states that the Communist Party is the ruling force of the society and the state, its efforts directed at the construction of socialism and communism. Citizens only have the right to agree with the Communist system. The people, moreover, have no right to amend the Constitution (Article 137 grants this to the legislative power, which is subordinated to the Executive) or to change the system, which is deemed irrevocable.
Article 62 limits the few rights conceded to the citizens, declaring that none of the constitutional rights of the citizens may be exercised against the goals and laws of the socialist state or of the construction of socialism and communism.  Similarly, Article 53 recognizes freedom of speech and press only as long as they conform to the objectives of the socialist society. It also establishes that all press, radio, TV, movies and all means of mass communication must be property of the state and in no case privately held.  Not surprisingly, internet access is extremely restricted and censored, as is access to all information from abroad.
Fundamental freedoms, such as the right to associate or assemble, labor rights including the right to strike or form independent unions, are not recognized. The citizens are also left legally powerless in practice, as there is no separation of powers or judicial independence (all power rests in the Executive branch, i.e. whoever controls the state and Communist Party, which is the Castro family).
2. The Penal Code
The Penal Code is a tool for the exercise of repression. Among its many aberrations, Article 72 criminalizes with of up to 4 years of prison the proclivity to commit crimes, i.e. acts that have not been committed, by penalizing conduct considered anti-social, which is defined as contrary to socialist morality and means anything perceived to threaten the system. The loose and generalized application of this law sends thousands of Cubans, especially young men, to prison, where horrible conditions lead to many deaths.
Two more examples from the Penal Code: