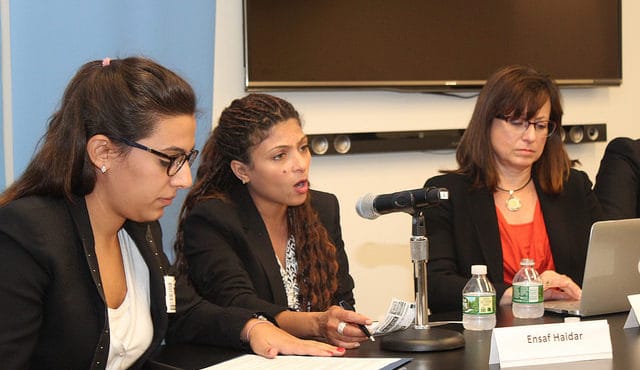 Good morning,
I feel privileged to be here and I am grateful that I get the chance to speak in front of you today.
As you know, last year, my husband Raif Badawi received the 2015 Sakharov Prize awarded by the European Parliament. Therefore, I had the opportunity to speak in front of members of the European Parliament, journalists and representatives from different international organizations. I will go on speaking about my husband, always hoping for justice.
I would like to remind you about Raif’s story. My husband has been languishing in a Saudi prison since June 17th, 2012. Our children live with me in the city of Sherbrooke, Québec in Canada. They have not seen their father for five years now.
I wrote a book about my story with Raif and about the first time I found myself having to publicly talk about our family’s suffering. It was when we escaped to Egypt, lived in Lebanon and then settled in Québec. As a woman living in Saudi Arabia, I had never imagined myself standing in front of international media defending my husband’s freedom of expression.

I also wrote about the Saudi Arabia Raif dreamed of and worked for, a Saudi Arabia where youth and women’s rights were respected. From the beginning of the book, I wrote about Raif’s gradual opening to human rights, how his eyes quickly turned to freedom in particular. He was always fueled by his desire to see reforms in his country, particularly regarding women and youth.
Raif speaks the language of freedom fluently, through his writings and blog posts. He founded the Network of Saudi Liberals which later became the Liberal Saudi Network. It was quickly followed by millions of people who were using aliases. It became a place of debate and struggle. Extracts from his posts have been published in a book in June 2015.
Ever since his early adulthood years, Raif realized the extent of the oppression and the missing freedoms in his society. He started expressing his concerns through his blogposts which eventually were the reason for his arrest. He was convicted and sentenced to ten years in jail and to a thousand lashes, as well as a ten-year travel ban.
On January 9, 2015, Raif received the first 50 lashes (the lashes were suspended due to health reasons, however, he remains in prison).
In order to honor Raif’s values, I launched in Canada, in 2015, the Raif Badawi Foundation for Freedom, a very young foundation with many projects underway. We are still fighting for my husband’s cause: weekly sit-ins are organized in front of King Abdullah’s Center for Interfaith and Interreligious Dialogue in Vienna, at City Hall in Sherbrooke, Quebec, as well as other cities around the world.
Ladies and gentlemen,

We thought according to the events mentioned previously that the Saudi government will reconsider Raif’s imprisonment.
We all know that the Quebec authorities have granted Raif a selection certificate, the first step to speed up his immigration process. The city of Sherbrooke in Quebec made him honorary citizen. What happened since then? What can be the next step?
We hope that the Canadian government will secure a safe passage to Canada for Raif. We all know about similar precedents such as the human rights activists from Rwanda.
Will members of the United Nations Human Rights Council join the European Parliament and ask for Raif’s release?
From the Dhahban central prison in Saudi Arabia to my family home in Sherbrooke, Quebec, our wish is one: to be reunited again.
We trust that your help can make a difference.
Thank you.