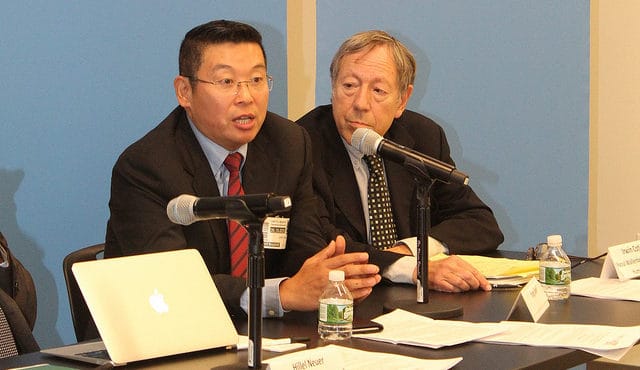 Yang Jianli, a survivor of the Tiananmen Square massacre and former political prisoner in China, addressed a United Nations press conference on Thursday organized by UN Watch, Human Rights Foundation, and the Raoul Wallenberg Human Rights Centre. Jianli is currently the president of Initiatives for China, working towards a peaceful transition to democracy.

Jianli began his remarks by recalling the tragic story of fellow Chinese human rights activist, Cao Shun Li, who died on March 14, 2014 in a Chinese military prison, after arbitrary detention and brutal beatings. She was arrested for trying to leave China and speak in Geneva on Chinese violations of human rights.

He also spoke of Tibetan Tenzin Delek Rinpoche, who recently died of torture in a Chinese prison. In addition to dissidents and Tibetans, the Chinese government also uses violence to “repress Christians, Mongolians, Uyghurs, and Hong Kong Democrats.”

On the topic of the UN, Jianli stated that “the people of China are misrepresented by their unelected government in the world body.”

As Jianli puts it, “electing China to the Human Rights Council is like picking the fox to guard the hen house, while he was still wiping feathers off his mouth from his last meal.”

Jianli urged leading democracies, like the US, Canada, UK, France, and Germany, to “gather all democracies together” and openly cast a “No” vote for China’s candidacy for the UN Human Rights Council. “If every democracy says no, China would have no chance.

However, Jianli expressed doubt that this would occur, noting that “many leading democracies are afraid of China’s economic power, and afraid of angering China, so they make no effort to hold China accountable for human rights violations.”

Indeed, “this [vote] is a moral test for all democracies.”