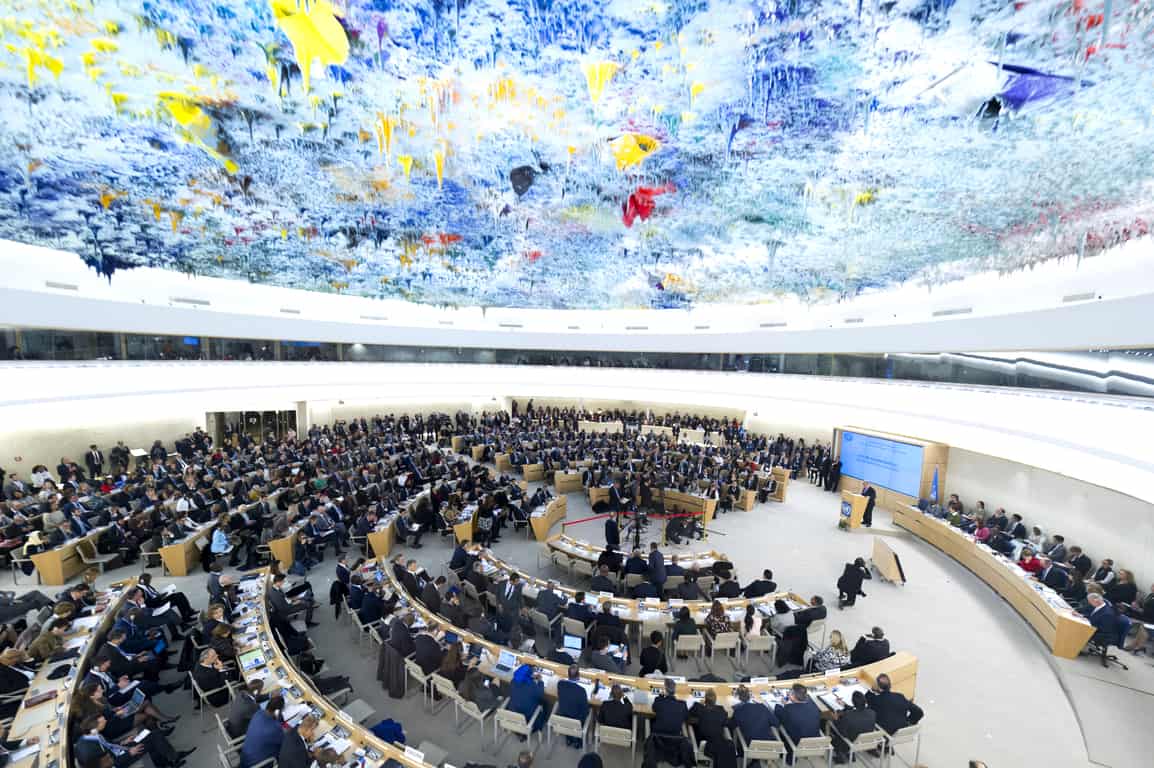 The following joint civil society statement was barred from publication by the UN, as confirmed by OHCHR on Sept. 4, 2019, despite being submitted as a NGO written statement according to standard protocol.

On 19 March 2019, at the 40th Session of the UNHRC, under the Agenda Item 9 General Debate on racism, racial discrimination, xenophobia and related forms of intolerance, Mr. Neuer took the floor to read an Oral Statement on behalf of Ingénieurs du Monde, a NGO with ECOSOC consultative status.

Before Mr. Neuer could even finish this sentence, the Chinese delegation aggressively sought to shut down the speech, banging loudly and interrupting with three points of order on the spurious claim that a speech for 1 million Muslim victims was unrelated to the topic of racism, discrimination, xenophobia and intolerance.

In response to the first interruption, Human Rights Council President Coly Seck stated that “we are considering Item 9 on the Agenda on racism, racial discrimination, xenophobia and related forms of intolerance,” and he then admonished Mr. Neuer “to stick to the agenda item.” Regrettably, this initial response by the UNHRC President implied an acceptance of China’s baseless objection and interruption, and sent the message that Mr. Neuer should stop speaking about the 1 million Muslim victims in China.

However, upon the next two interruptions, President Seck defended Mr. Neuer’s right to speak on China’s abuse of Uighur Muslims under Item 9. In the end, President Seck reprimanded China, stating: “I’d like to recall that under the agenda item we’re discussing, speakers can make reference to specific country situations. Please prevent disturbing the proceedings of the room the next time.”

Having failed on its Points of Order, China proceeded to rudely interrupt Mr. Neuer’s speech by loudly banging on the table. This violated Rule 113 of the Rules of Procedure, which allows delegations to make Points of Order, and to appeal a presidential ruling by calling for a vote, but not to harass and interrupt a legitimate statement by another delegate.

Indeed, there was no legal basis at all for China’s interruptions, as the speech in defense of an oppressed ethnic and religious minority in China was well within the scope of Item 9, which covers “racism, racial discrimination, xenophobia and related forms of intolerance.”

The speech was also fully consistent with the UN Declaration on Racism (“any restriction on the complete self-fulfillment of human beings…which is based on racial or ethnic considerations is contrary to the principle of equality in dignity and rights…[and] cannot be admitted”); the Convention on the Elimination of Racial Discrimination (“each State Party undertakes to engage in no act or practice of racial discrimination against persons, groups of persons or institutions and to ensure that all public authorities and public institutions, national and local, shall act in conformity with this obligation”); and the International Covenant on Civil and Political Rights (“the law shall prohibit any discrimination and guarantee to all persons equal and effective protection against discrimination on any ground such as race, colour, sex, language, religion, political or other opinion, national or social origin, property, birth or other status”). Moreover, it is noted that in this same debate on 19 March, as on all previous occasions under Item 9, other country and NGO speakers highlighted specific country situations.

Accordingly, the conduct of the Chinese delegation during that debate constituted an outrageous attempt to silence a legitimate statement for victims by a human rights activist at the United Nations and violated numerous UN rules and procedures regarding the long-established right of NGOs to participate in Council sessions, the origin of which was established under Article 71 of the UN Charter.

Furthermore, the right of NGOs with ECOSOC consultative status to participate in Council sessions, including through oral presentations, is expressly recognized under GA Resolution 60/251, the Council’s founding document (paragraph 11); HRC Resolution 5/1 on Institution Building (paragraph 3); and ECOSOC Resolution 1996/31 on NGO participation (Paragraphs 27-32). This right is affirmed by the Council on its website and in its Practical Guide for NGO Participants, both of which clearly state that such NGOs may “make oral interventions” and “participate in debates, interactive dialogues, panel discussions and informal meetings,” among other things. In this case, Ingénieurs du Monde followed all of the relevant HRC procedures to register for a speaking slot for the Item 9 debate, and to accredit Mr. Neuer to deliver the relevant statement. We remind all stakeholders that it is a long-established practice that a NGO may accredit the representative of another NGO to read a statement on their behalf. This is an essential right for NGOs who may be unable to attend a given session in Geneva, due to a lack of material means or because of physical disabilities. To undermine this long-established right would amount to a form of discrimination and a gross infringement of the basic rights of NGOs.

In addition to violating the above rules, China’s attempt to silence Mr. Neuer also constituted a brazen violation of the right of all NGO representatives to freedom of expression, as guaranteed under Art. 19 of the Universal Declaration of Human Rights, and Art. 19 of the International Covenant on Civil and Political Rights. We remind all stakeholders that NGOs are essential to the work of the Council.

Accordingly, we call on Secretary-General Antonio Guterres, High Commissioner for Human Rights Michele Bachelet, Human Rights Council President Coly Seck, Member States and Civil Society to vigorously defend the rights of NGOs to speak out at the United Nations, and in particular at the Human Rights Council, on behalf of human rights victims worldwide, and to immediately reject and condemn any attempt by a UN member state, including China in this case, to interrupt and censor such legitimate NGO statements, or to engage in any form of wrongful pressure or intimidation against any NGO or their representatives.