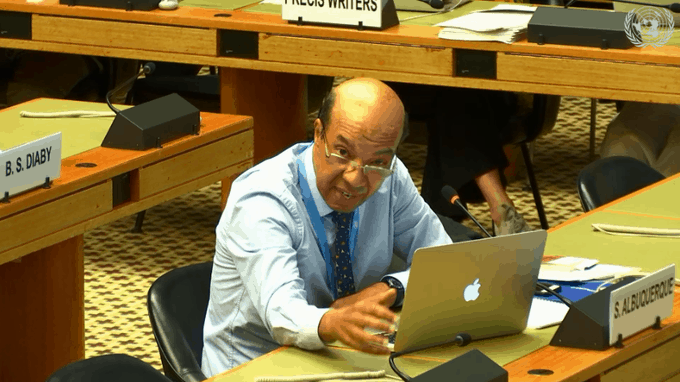 One member of the UN committee, Brazil’s Deputy Special Secretary for Human Rights
Silva Albuquerque, asked the Palestinian representatives about “the presence of anti-Semitic
and discriminatory contents in textbooks used by children and teenagers in Palestinian schools.

August 30, 2019 — In a rare UN criticism of the Palestinians, the world body’s racism watchdog urged Ramallah to combat “hate speech and incitement to violence,” saying it was “concerned” about statements by Palestinian public figures, politicians and media officials, as well as in school textbooks and curricula, pointing to “hate speech against Israelis” which it found “fuels hatred” and “may incite violence” and “antisemitism.”

The UN Committee on the Elimination of Racial Discrimination (CERD) further called on the Palestinians to “remove any derogatory comments and images from school curricula and textbooks that perpetuate prejudices and hatred.”

In addition, the panel found that Palestinians laws and policies failed to implement UN treaties on racism, or to properly investigate complaints for acts of racial discrimination.

The 18 independent experts reviewed the Palestinian record and those of six other countries at a session that ended on Thursday, when they issued their findings.

In wake of the review session two weeks ago, Palestinian representative Ammar Hiajzi lashed out at UN Watch after the Geneva-based non-governmental organization briefed the UN experts on Palestinian incitement.

“We must not allow our discussions to be diverted and side-tracked by those organizations founded and funded to deny the Palestinian narrative, dehumanize the Palestinian people by spreading lies and half-truths about them,” he tweeted on August 15th, prompting a sharp reply from UN Watch Executive Director Hillel Neuer.

2/ Mr. Hijazi, you really should not cast aspersions on UN Watch's founding. When our founder Morris B. Abram was drafting the UN anti-racism convention in 1964—under which you were just reviewed—your founder Yasser Arafat was fathering modern terrorism. https://t.co/jJUCN2AIiW pic.twitter.com/ABd2BZhuq2

UN Watch, one of the few NGOs to brief the committee on the Palestinian record, commended the UN experts for calling on the representatives of President Mahmoud Abbas to take action against antisemitism in Palestinian textbooks, and for spotlighting the mistreatment of minorities in Palestinian-controlled areas.

UN Watch’s founder, civil rights leader Morris Abram, was a key drafter of the UN anti-racism committee’s core document, the convention to eliminate racism, when he served as a UN expert in the 1960s. A new book to be published in December, “Touched with Fire: Morris B. Abram and the Battle against Racial and Religious Discrimination,” recounts this history.

“What happened this week was unprecedented. Since 1974, when Yasser Arafat and the PLO were welcomed into the United Nations, this is the first time that the world body’s spotlight was officially placed on Palestinian racism, discrimination and antisemitism. Accountability is always the best disinfectant.”

“Sadly, despite their signing of UN treaties, the Palestinian side failed to show any sense of accountability, instead repeatedly pointing the finger at Israel as an excuse. The Palestinians declined to explain why, for example, their newspapers and websites publish grotesque caricatures of Jews that look straight out of Der Sturmer. UN Watch regrets the Palestinian attempt to politicize the review session.”

“Astonishingly, while dozens of EU-funded Palestinian NGOs routinely address UN sessions on Israeli actions, and submit voluminous reports, not a single one of these groups submitted a report at this first-ever UN review of the Palestinians’ record on racism.”