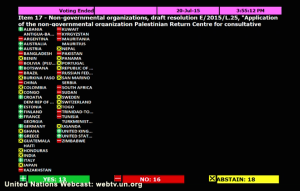 GENEVA, July 20, 2015 – A majority of countries and nearly all of the democracies on the 54-nation ECOSOC refused to support the NGO application of the “Palestinian Return Center” amid evidence of the group’s entanglement with the Hamas terrorist organization, yet a plurality of only 16 countries, including dictatorships like China, Sudan and Zimbabwe, managed to successfully propel the PRC’s application forward.

Leading democracies were among the 13 who voted to reject the PRC’s bid, including the United States, France, Germany, the United Kingdom, Australia, Italy, Greece, Austria, and Finland. Others opposing the alleged Hamas front group included Albania, Botswana, Croatia, and Estonia. Another 18 countries abstained.