GENEVA, June 25 – Venezuela’s most-wanted man will appear before the United Nations this week to expose the Chavez government’s poor human rights record, and to oppose its bid for a seat on the world’s top human rights body.

Eligio Cedeño, a young Venezuelan banker jailed in 2007 for defying Chavez, was declared a victim of arbitrary detention by an expert working group of the U.N. Human Rights Council. He was released nearly three years later by a courageous judge, Maria Lourdes Afiuni. The next day, Chavez went on live TV to call her a criminal, and threw her in prison.

Cedeño managed to escape the country and found asylum in Miami. An Interpol red notice against him was removed on grounds that Venezuela was engaged in political persecution.

UN Watch, the Geneva-based human rights group, is arranging Cedeño’s testimony this week before a plenary meeting of the U.N. Human Rights Council, as well as appearances by well-known activists from Syria and North Korea.

“We are honored to provide a platform for such courageous champions of human rights,” said international lawyer Hillel Neuer, the director of UN Watch. The group heads an international campaign of 55 MPs and NGOs seeking to defeat the Chavez candidacy for a seat on the 47-nation council. 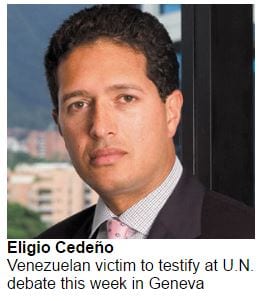 Eligio Cedeño is a former political prisoner from Venezuela. He was jailed for more than 1,000 days because he agreed with the activities of Venezuela’s political opposition and financially supported a political prisoner–the imprisoned leader of Venezuela’s largest trade union, a man defended by the International Labour Organization. Mr. Cedeño was held for nearly three years without a trial. Following a recommendation by the UN Working Group on Arbitrary Detention, Mr. Cedeño was freed by Venezuelan Judge Maria Lourdes Afiuni. The next day Venezuela’s president publicly called for Judge Afiuni to be imprisoned for 30 years. Judge Afiuni has been in prison and under house arrest since 2009. Mr. Cedeño has been granted political asylum in the United States.More: Eligio Cedeño: A banker battles Hugo Chavez, Miami New Times, Sep. 1, 2011 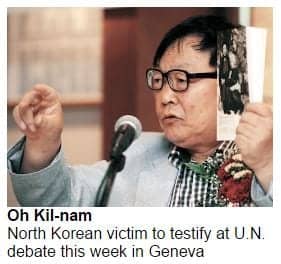 Dr. Oh completed his Ph.D. in economics in Germany when, in 1985, he was approached by North Korean agents who suggested he defect. The agents offered him an important job working as an economist for the North Korean government and promised to provide free treatment for his wife’s hepatitis. Dr. Oh moved to Pyongyang with his family despite his wife’s reservations, but when they arrived he realized he had been tricked. Later on, he was offered to move to the North Korean embassy in Copenhagen, from where he would lure South Korean students to the North Korean embassy. Once he arrived in Copenhagen, Dr. Oh defected. Now 70 years old, he still does not know the fate of his wife and daughters — either dead or imprisoned in a labour camp. His hopes now rest with the United Nations, whose working group on arbitrary detention has petitioned North Korea to release the family, saying their detention is “arbitrary,” but the response has not been positive. “I hope there will come a day when I can meet my family again, hug them and embrace them, and cry tears of happiness. If it does happen it will be the happiest day of my life.”

Hadeel Kouki is a 20-year-o 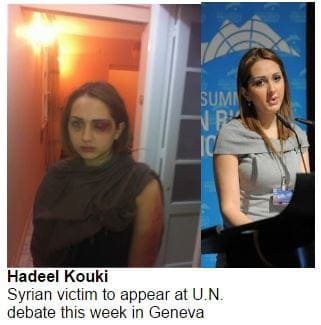 ld Syrian Christian who was arrested, jailed and tortured in 2011 for promoting democracy. She fled the country, hiding with nomads in the desert before the Free Syrian Army smuggled her into Turkey. She recently testified on behalf of UN Watch during the emergency U.N. debate on the Al-Houleh massacre. She has been interviewed by Al-Arabiyah, Switzerland’s L’illustré, the Associated Press and other media. 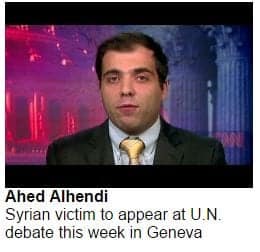 Ahed Alhendi is the founder of Syrian Youth for Justice. As a student in Syria, he was imprisoned and tortured for political activism. He fled and now lives in the United States. Alhendi continues to struggle for human rights in Syria and has published and interviewed widely. CNN interviews & publications.