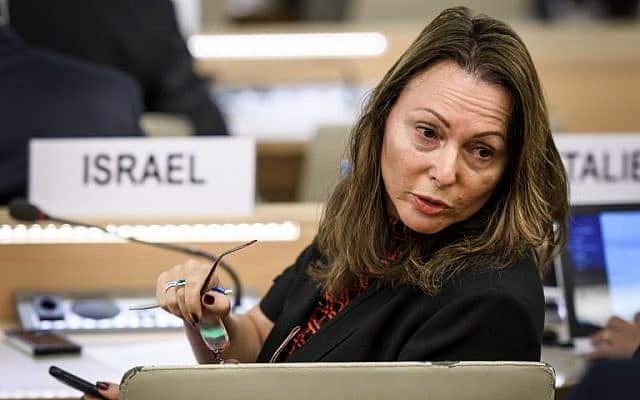 On December 12, 2019, the Geneva-based UN Committee on Elimination of Racial Discrimination found it had jurisdiction to hear the Palestinians’ inter-state complaint against Israel under article 11 of the Anti-Racism Convention. Below is background information about the complaint and the timeline of proceedings.

‘Palestine’ does not satisfy the criteria for statehood under international law and lacks the legal capacity to join the aforesaid convention both under general international law and the terms of bilateral Israeli-Palestinian agreements.
The Government of Israel does not recognize ‘Palestine’ as a State, and wishes to place on record, for the sake of clarity, its position that it does not consider ‘Palestine’ a party to the Convention and regards the Palestinian request for accession as being without legal validity and without effect upon Israel’s treaty relations under the Convention.

Notwithstanding Israel’s objection to its membership, on April 23, 2018, the Palestinian Authority filed a 350-page complaint against Israel pursuant to Article 11(1) of the Convention. Although the complaint is not public, the recent decision of the Committee indicates that the complaint accuses Israel of apartheid under article 3 of the convention. According to the 18-member Committee, the body charged with monitoring compliance with the Convention which must adjudicate the complaint, this was only the third such inter-state complaint ever filed. The first two were submitted just one moth earlier by Qatar against Saudi Arabia and the United Arab Emirates, respectively.

November 2018: Palestinian Authority refers the matter to the Committee

Article 11(2) of the Convention provides that if the parties are not able to resolve the matter by negotiations within six months, “either State shall have the right to refer the matter to the Committee.”

As the parties were unable to resolve the complaint through negotiations, on November 7, 2018, the Palestinian Authority referred the matter to the Committee.
Israel objected to the Committee’s jurisdiction to handle the complaint on the grounds that Israel does not recognize Palestine as a state and had objected to its membership in the Convention from the outset. Indeed, in the 1980s, the Committee rejected on similar grounds a complaint which Syria had attempted to file against Israel, i.e., because Syria did not recognize Israel as a State.

July 2019: UN Office of Legal Affairs concludes Committee has no jurisdiction over complaint

The Committee sought an opinion from the UN legal advisor in New York. In a reply memorandum dated July 23, 2019, the UN Office of Legal Affairs concluded that the Committee lacks authority to deal with the complaint, stating:

A State party to the Convention is able, through a unilateral statement, to prevent the creation of obligations and rights under the Convention between itself and another specific State party. The statement made by Israel on 16 May 2014 is framed in such a manner as to have that effect between itself and the State of Palestine… The statement made by Israel precludes the committee from examining inter-state communications submitted by the State of Palestine. (See CERD/C/100/5 at para. 2.3).

December 2019: Committee decides it has jurisdiction over inter-state complaint

Nevertheless, on December 12, 2019, a sharply-divided Committee found that it does have jurisdiction to adjudicate the Palestinian Authority’s interstate complaint against Israel.
It acknowledged that “under general international treaty law, a State party to a multilateral treaty may exclude treaty relations with an entity it does not recognize through a unilateral statement.” (See CERD/C/100/5 at para. 3.13). However, disregarding this well-established principle, it found jurisdiction anyway, suggesting that a different rule applies to human rights treaties because they are “for the common good of the whole international community which cannot be derogated from by the unilateral action of one State party…” (See CERD/C/100/5 at para. 3.43).
Significantly, five of the 18 members of the Committee publicly disagreed with this decision and took the unusual step of publishing a dissenting opinion. The dissenting Committee members are:

In their dissenting opinion they had harsh words for the Committee, writing:

A body set up by a treaty to monitor the treaty obligations of States should itself respect the rules of treaty law. The decision of the majority overlooks in particular the fundamental differences between an objection against the establishment of mutual treaty relations and a reservation to a treaty provision and between the substantive and the monitoring provisions of the Convention.

The dissenting Committee members explained that while the Committee recognizes both Israel and the “State of Palestine” as State-parties to the convention with substantive obligations under the Convention, “being parties to the same multilateral convention does not imply mutual recognition.” They added:

The jurisdiction of international supervisory bodies is based on consent of States to enter into treaty relations with other States. Without said consent, the Committee does not have jurisdiction to hear inter-state communications.

Citing the opinion of the UN Office of Legal Affairs, the Syria precedent and other sources of international law, the dissenting Committee members found that the Committee lacks jurisdiction to deal with the Palestinians’ inter-state complaint against Israel.

Israel and the U.S. react to the decision

Israel immediately published a statement that it “regrets” the Committee’s decision. Aviva Raz Shechter, Israel’s Ambassador to the UN in Geneva, said: “As far as Israel is concerned, the Committee has lost credibility, and the cause of the Convention has regrettably been gravely undermined by the very body entrusted with protecting it.”
The U.S. also criticized the decision. In a statement issued by its Geneva Mission, the U.S. “expresse[d] its profound disappointment” with the decision. Ambassador Andrew Bremberg stated: “The Committee’s disregard for treaty law raises serious questions about the legitimacy of this process. The United States will continue to advocate for fair treatment for Israel in this and other international fora.”

On April 30, 2021, the Committee published a second contentious decision in which it found the Palestinian Authority’s interstate complaint to be admissible. In doing so, it completely rejected Israel’s objections to admissibility, particularly the argument that the Palestinians had failed to exhaust local remedies pursuant to Article 11(3) of the Convention. The Committee stated it was “satisfied that the threshold of prima facie evidence of a generalized policy and practice” on the part of Israel related to “substantive issues under the Convention is fulfilled,” and therefore “the rule on exhaustion of domestic remedies does not apply.” Pursuant to Article 12(1) of the Convention, the Committee requested the appointment of an ad hoc Conciliation Commission to “make its good offices available to the States concerned with a view to an amicable solution of the matter on the basis of States parties’ compliance with the Convention.”

This decision was adopted by only ten out of the Committee’s 18 members with four members who had dissented on the December 2019 jurisdiction decision refraining from joining in this decision – Marc Bossuyt of Belgium, Rita Izsak-Ndiaye of Hungary, Keiko Ko of Japan and Yanduan Li of China (Maria Teresa Verdugo Moreno of Spain who also dissented on the jurisdiction decision is no longer on the Committee) – and an additional four members being absent.

Israel called the decision “shameless and biased,” applying “a separate standard to Israel” and disregarding “both facts and law to reach a predetermined and agenda driven conclusion.” It added that Israel would “maintain its enduring commitment to elimination of all forms of racism, and will ensure that its robust, independent and world renowned legal system will continue to provide avenues for redress for legitimate grievances in accordance with the rule of law.”