Mexico’s UNESCO envoy walked out to protest Islamist resolution on Jerusalem, now may get fired

When it came time last Thursday for 58 country representatives on the UNESCO executive board to vote on an Arab-drafted resolution that effectively denied Jewish ties to Jerusalem’s Temple Mount and the Western Wall—by using Islamic terms only for Judaism’s holiest sites—Mexico was one of only 24 states that voted for the pernicious text. (Full UN Watch analysis and country voting sheet here.)

Yet Ambassador Roemer, who is Jewish, had already walked out of the hall. Out of conscience, he could not bring himself to carry out his government’s instructions and support the outrageous resolution; one of his deputies had to cast the vote instead. (See at bottom how Mexico tried to deny its instructions.)

Mexico’s foreign ministry has now summoned the 52-year-old Roemer—described as both a Renaissance man and a genius—back to Mexico City “for consultations.”
Roemer said he thought about quitting, but after consultation with ambassadors from other countries, decided to stay in office.
Yet according to Carmel Shama-HaCohen, the Israeli ambassador to UNESCO who strongly praised Roemer, the Mexican diplomat is now at risk of being “sent home and fired.”
In a Facebook post yesterday, the Israeli envoy posted a photo of the two diplomats standing together in the Israeli embassy’s Sukkah, a Jewish hut that is constructed to celebrate the current week-long festival of Sukkot.

Following is the comment by Israel’s ambassador to UNESCO, translated from the original Hebrew:

In the Sukkah of the embassy in Paris with Andreas, Mexico’s ambassador to UNESCO, who received an instruction to vote for the Palestinians, and as a Jew his conscience would not allow him to vote for ignoring the historic and religious connection with the Temple Mount and the Western Wall (all those questioning the significance of the decision should please note). He got up and left the hall with the start of the voting, and one of his deputies voted instead.
Andreas is an ambassador who just arrived in Paris this summer and it’s possible that his conscience-based decision will result in him being sent home and fired. In any case, we wish him a happy holiday—and bravo for his courage

Shamma-HaCohen previously thanked Roemer for his stance in a letter sent on Friday, the day after the vote, urging him not to resign. 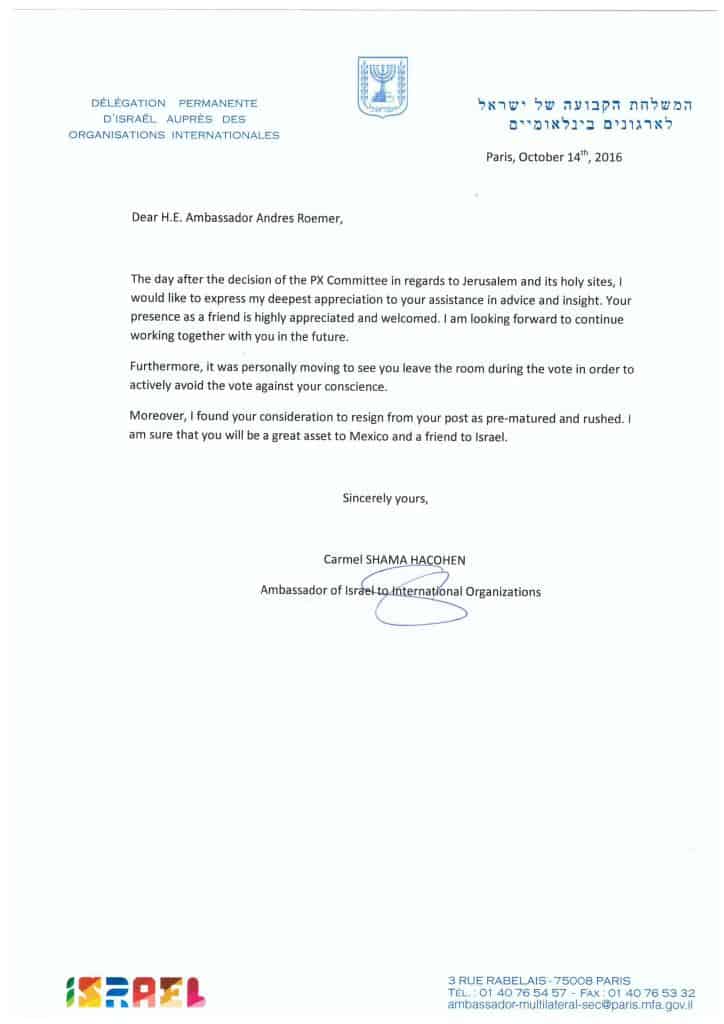 In the letter, a copy of which was obtained by UN Watch (above), Shama-HaCohen wrote that he found it “personally moving” to see Roemer “leave the room during the vote in order to actively avoid the vote against your conscience.”
HaCohen wrote: “I would like to express my deepest appreciation to your assistance in advice and insight. Your presence as a friend is highly appreciated and welcomed. I am looking forward to continue working together with you in the future.

“Moreover, I found your consideration to resign from your post as pre-matured and rushed [sic]. I am sure that you will be a great asset to Mexico and a friend to Israel.”

Mexico City Tries to Deny Instructions, Impugn Roemer—Yet Leaked Email Offers Clear Proof
In an odd twist, sources from Mexico’s foreign ministry, quoted in a report yesterday in the newspaper Reforma y El Norte, are apparently trying to scapegoat Ambassador Roemer for Mexico’s outrageous vote for the UNESCO resolution.
The Mexico City sources claimed that Roemer voted “without consulting the Undersecretary for Multilateral Affairs and Human Rights, and without realizing that countries like France, Spain and Argentina would change their traditional position and abstain.”
All of this is proved completely false by a leaked email, published by Enlace Judío, which spells out the Mexican foreign ministry’s instructions to support the text, with numerous justifications seeking to show how the text was improved since the prior April version.