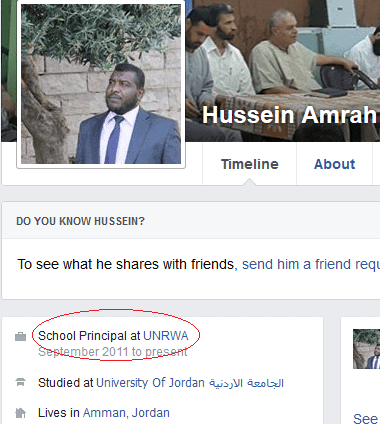 Hussein Amrah, who identifies himself on his Facebook profile as an UNRWA school principal. His Facebook page photos glorify Hamas fighters. Image 1, Comments 1 and Comments 2 show a little boy with the banner of Hamas leader Ismail Haniyeh and facebook comments praising this. Image 2 is screenshots from a video celebrating injury and death of Israelis. Image 3 is a group of Hamas terrorists.

Image 4 is a cartoon of a Palestinian militant catching a Jewish soldier like a fish. Image 5 refers to two kidnapped soldiers, whilst Image 6 shows a group of Hamas terrorists. In Image 7, this school Principal writes “Contribute to Jihad in any way you can” – whether by bullet, pen or USB stick. In the last two photos below, Image 8 and Image 9 Amrah can be seen with students at his UN-funded school.