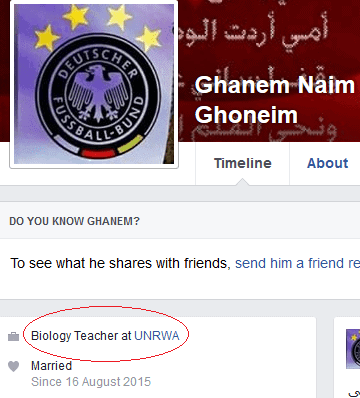 Ghanem Naim Ghoneim, who identifies himself on his Facebook profile as a teacher at UNRWA, has two photos posted in his public Facebook page of Adolf Hitler, Image 1 and Image 2, whom he calls “our beloved,” and “Hitler the great.”

The UNRWA teacher notes that Hitler was close with Palestinian Arab leader Amin al-Husseini, and then adds, “God bless Hitler.”

Commenting on one of his Hitler photos, seen in Comments 1 and Comments 2, two of Mr. Ghoneim’s apparent UNRWA students praise the post, with one saying “God bless you, teacher!” and the other saying “Nice one, teacher.” Their profiles can be viewed by clicking on Student Profile 1, Student Profile 2 and Student Profile 3.

The pro-Hamas post grossly violates UNRWA employees’ duty of neutrality, and the antisemitic posts violate their duty to reject racism in all its forms.

Here is a photo of Mr. Ghoneim with two of his students. The 238 ‘likes’ that the student post of Ghoneim received indicate that at UNRWA he is an admired teacher and role model.

UPDATE March 13, 2017: Ghanem Naim Ghoneim used Facebook to check-in at an UNRWA training session, confirming that his employment was not terminated by UNRWA when in February 2017 UN Watch exposed Ghoneim as an admirer of Hitler.