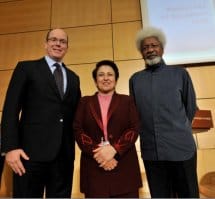 It is rare when the UN hosts an event that speaks truth to power. But that is exactly what happened in Geneva today when Iranian human rights defender and Nobel laureate Shirin Ebadi and Nigerian author and Nobel laureate Wole Soyinka appeared on a panel, in the magnificent Salle des Assemblées, to mark the 60th anniversary of the Universal Declaration of Human Rights (UDHR), organized by the UN Institute for Training and Research (UNITAR).

The event was chaired by UNOG Director-General Sergei Ordzhonikidze and attracted a full room, mostly with students and Iranian expats, as well as diplomats and NGO activists.

Ordzhonikidze opened with a speech, followed by a clip on the adoption of the UDHR, which showcased speeches and key figures behind the document, as well as the actual 1948 vote. The film only showed three positive votes from the roll call, but omitted to mention the 8 abstentions that came from the USSR and its vassals and satellites (Byelorussia, Czechoslovakia, Poland, Ukraine), Yugoslavia, apartheid South Africa and Saudi Arabia.

Both Nobel laureates made passionate statements, reaffirming the universality of human rights. They spoke against dictatorships, non-democratic Islamic states and oppression. Both condemned the notion of cultural relativism as an excuse for not implementing human rights.

Ebadi spoke of “human rights defenders [who] are silenced as ‘heretics’”, and dictatorships that use religion to oppress their people. Soyinka deplored the situation in Zimbabwe and also criticized the US Patriot Act.

Following the two speeches, a panel of Swiss journalists asked questions, and, in a Davos-style setting, the floor was opened for questions from the audience.

The first question from a Swiss journalist was to Ebadi, saying how much the Swiss were “shocked” to see Swiss FM Micheline Calmy-Rey meet with Ahmadinejad this year, and asking her opinion.

Ebadi said that she was surprised that a Cabinet Minister from a country with such respect for human rights would agree to meet with such a government and sign an agreement with them, which is to the detriment of the Iranian people, instead of meeting with representatives of civil society. The room gave Ebadi a round of applause.

Ordzhonikidze was quick to respond in support of the Swiss Foreign Minister, saying that he disagreed with Ebadi and agreed with Calmy-Rey. He said that her visit means that diplomacy is working. Diplomats have to meet each other to make peace in the world. Negotiations are happening all around the world between hostile nations. If not, the other option would be war. He said he fully supported what Calmy-Rey did. Few applauded this statement.

The moderator, the head of UNITAR, invited Ebadi to respond. Ebadi said she doesn’t oppose dialogue. It is normal for countries to have dialogue. But Calmy-Rey’s trip to Iran was not to talk of peace or human rights, and she was not prepared to meet with even one person from Iran’s civil society. Agreements were signed, pictures were taken and Calmy-Rey left. It was only done for economic reasons, and to the detriment of the people of Iran. Ebadi received another round of applause.

For the rest of the discussion, Ebadi spoke about women’s rights in Iran. About how a woman is only worth half of a man’s life. How the Bahais are discriminated in Iran and suffer from a “cultural genocide.” How Iranian law establishes religious discrimination. Bahais have no rights under the law. For the last 30 years, they are barred from universities.

When some Bahai leaders were arrested, nobody wanted to represent them, so she did. The official Iranian News Agency sought to defame Ebadi by claiming she was a Bahai convert. In Iran, a convert is liable to execution for apostasy. These discriminatory laws need to be reformed.

A Kurd from Iran also asked a question and Ebadi responded that it is true that Kurdish leaders have been assassinated and she thinks that violence can never be justified.

Ebadi shared a story about the Commission on Human Rights. A few years ago she came to Geneva to meet with diplomats from the Commission and tell them about women’s rights in Iran. She entered the room and saw eight diplomats — five of whom represented countries where the situation of women’s rights is even worse that in Iran! So she said hello, and left the room. She said this needs to change.

Soyinka deplored the weak performance of the Human Rights Council. He also deplored the lack of UN response to the great human rights disaster in Darfur, and said that the UN has still not learned the lessons of the Rwandan genocide. He also criticized China for its support to Sudan.

The event concluded with a speech by the Prince of Monaco, Albert II. The Prince repeated many of the notions of the discussion. He said that today is an anniversary but not a celebration. Relativism has emerged as a new enemy of the universality of human rights. How can it be acceptable to turns one’s back on the oneness of humanity?

The ambassador of Sri Lanka was reportedly quite upset that he was not recognized by the chair to ask a question.

The event was a rare instance of fresh air at the UN. The doors of the UN were opened to human rights defenders and victims, and oppressive regimes were named and shamed.

PrevPreviousELEANOR’S DREAM 1948 TO 2008
Next9/11 conspiracy theorist should leave U.N. jobNext